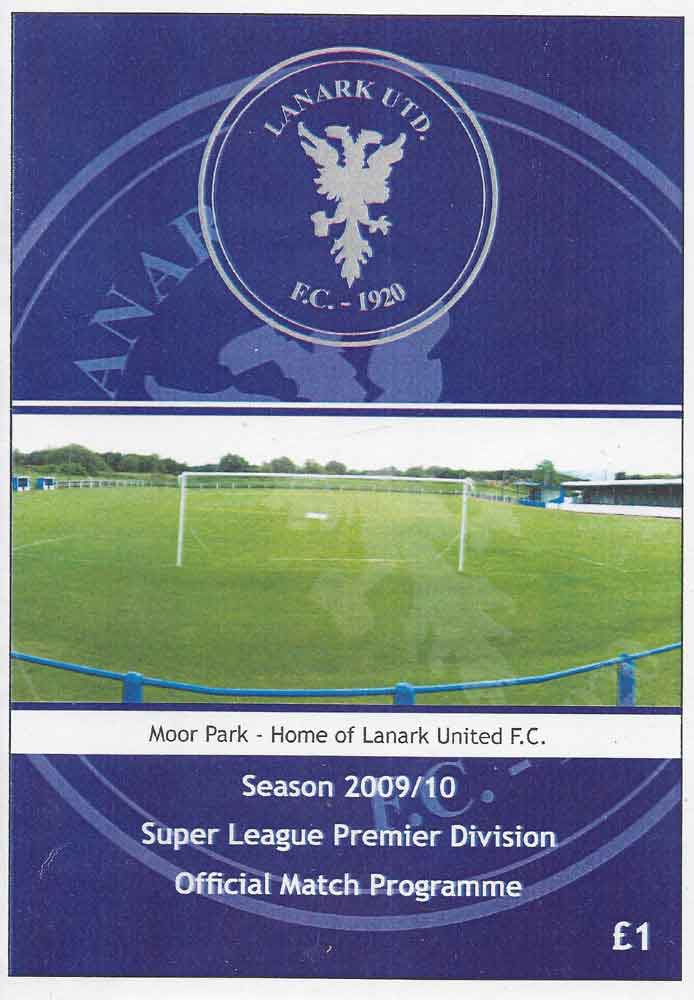 After a season that has lasted 10 and a half months, 47 matches, 26 of which have been in the league in pursuit of a place in the Super Premier Division, the Bankies may be left to rue two critical incidents in their play off at Lanark on Wednesday. Firstly, Billy Jones senseless ordering off which left the a weary Bankies side 80 minutes to play with ten men, and Stevie Dallas’ missed spot kick which would have thrown the club a lifeline going into tonight’s second leg. Instead, the Bankies now have a mountain to climb as Lanark seek to protect their two goal advantage.

The Bankies started this match with no recognised left sided players in the line up with Molloy absent, and Harvey on the bench. Recent signing Darren MacKinnon earned a starting berth in the midfield after his impressive performances since joining the club.

The opening exchanges gave no indication of what was to come after 11 minutes. Lanark had a shot go wide from Lennox, and the Bankies forced a couple of early corners, that caused moderate concern to the home defence. The match exploded, however, when Billy Jones ill-conceived two-footed tackle on Hanlon in the centre circle earned the Bankies midfielder a straight red card.

This immediately altered the psychology of the match. The Bankies were suddenly on the back foot, and unfortunately went a goal behind before they could adjust to the situation. A ball into the box was headed out by MacKinnon, but was immediately returned into the box. Better defending should have seen the ball cleared, but Goodwin took advantage to stroke the ball home from 12 yards.

Budgie McGhie bravely continued to play two men upfront, but the Yowes were playing confidently now, and twice in a minute could have extended their lead. Lennox took too long to decide what to do with the ball when he made a fine run in the box and was closed down, and then a mis-hit shot went straight into the path of Doyle but shot weakly at Gonet.

The Bankies started to settle down after a nervy spell, and just when they were showing signs of coming back into the match, they were rocked when Chris Mackie had to go off injured. The remaining time in the half was played out evenly with the Bankies having the best effort when Jack shot over the bar after a neat lay off by the hard working Dymock.

The second half begun with a Hanlon snapshot going wide of the post, then the Bankies really stepped up the pace forcing a series of corners. Unfortunately, nothing came from them, and just as the Bankies were arguably enjoying their best spell up to that point, Lanark hit them with a sucker punch. Fine play by McAulay on the wing saw him set up Goodwin, whose shot was too hot for Gonet to handle, and Cuthill was perfectly placed to lash the ball high into the net.

This goal allowed Lanark to play the waiting game. They could now afford to let Clydebank take the game to them, and hopefully kill it off on the break. The Bankies responded well and with MacKinnon driving the midfield it looked like something might happen for them. And it did after 60 minutes. MacKinnon was at the heart of the move as he pushed the ball into the feet of Dallas in the box. The front man was tripped as he went for the ball and the ref awarded a penalty.

This gave the Bankies a great chance to take something back to Holm Park. Stevie Dallas took the duties over from Gary Lynn who had missed his last two penalties. Unfortunately, Dallas took one of the worst penalty kicks you are ever likely to see as he appeared to kick the ground as he struck the ball and it skittered harmlessly past the post.

As the Bankies tried to pick themselves up from this body blow, Goodwin had a volleyed attempt on goal, but Gonet collected the ball safely. Midway through the half MacKinnon went on a tremendous run deep into the Lanark half. He showed great strength holding off several challenges before he pushed the ball out to Stevie Dymock who fizzed in a diagonal shot that went wide of the post. A minute later and Rowan made heavy weather of a Nikky Cairney shot from close in as he fumbled the ball out for a corner. Ross Campbell headed towards goal at the back post from the resultant flag kick, only to see the ball ricochet off a couple of defenders and land in Rowan’s arms.

As the ten men began to tire, Lanark were becoming more effective on the break. The pick of the bunch was when Nikky Cairney committed himself just inside the Lanark half leaving Gary Lynn the only defender against 5 or 6 Lanark runners. Luckily for the Bankies, Stefan Gonet was alert as a Lanark forward kicked the ball too far in front of himself allowing the keeper to dive on the ball. That really should have been curtains!

Clydebank continued to have long range efforts on goal without ever really threatening the Lanark goal. Lynn, MacKinnon, Kilpatrick and Campbell all had attempts that were either saved easily or were off target.

Lanark, for their part could possibly have got the killer third before the end as McAuley began to shine amongst the tired Bankies legs. He made several probing runs but couldn’t find the final pass or shot required to extend the lead. Doyle had a shot that sneaked just past the post, before McAuley’s best effort was well saved by Stefan Gonet.

The Bankies players could not be faulted for effort, but Lanark used their numerical advantage well, and scored at crucial points in the game. We will never know how this game might have squared up if the Bankies hadn’t gone down to ten men so early on in proceedings. It must be said however, that they haven’t done themselves any favours by not taking their penalty kick lifeline and these two moments may be what this play off series will be remembered for.