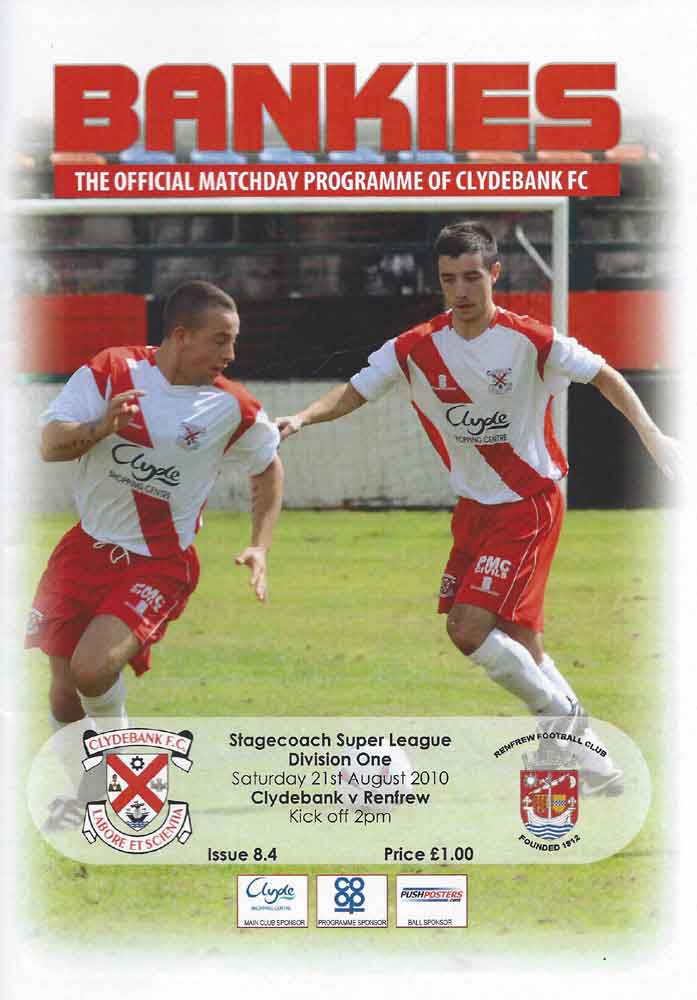 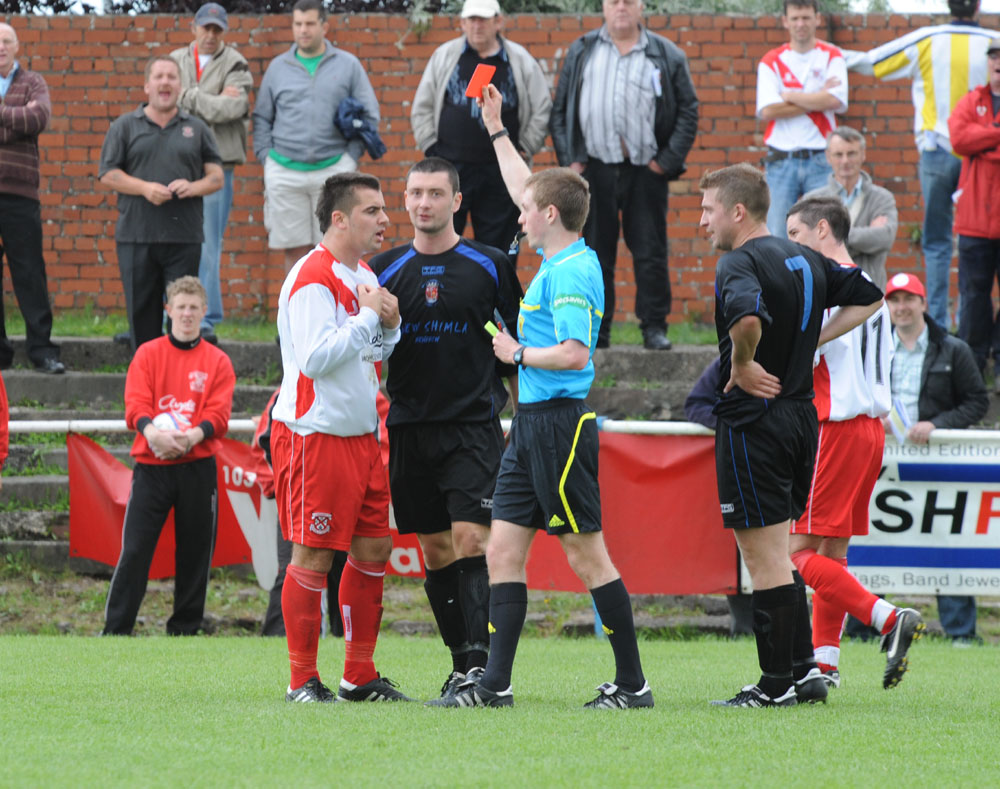 Clydebank got off to the worst possible start to the league season by going down to Renfrew by a solitary strike from the penalty spot midway through the second half. Both sides were reasonably well matched throughout, but a disastrous eight-minute spell for Tommy Martin saw him firstly give away the spot kick, and then get his marching orders for a soft offence.

After two defeats in a row, the fans were anxious to see a positive response from the players, and they got it. After only two minutes McPherson superbly backheeled the ball into the path of MacKinnon who surged into the box riding two challenges in the process. He cut the ball back from the bye line to Dymock, but the Bankies striker drove it off the post for his first of many misses.

Keeping up the pressure Nikky Cairney got on the end of a Paul Allum cross, but his glancing header drifted wide of the post. The early goal never came however, and you got the feeling that the Bankies really needed it to boost the confidence. As time progressed Renfrew eased themselves back into contention.

A goal kick from Bell went straight to the unmarked Reid, who turned and flashed a shot over the bar. Midway through the half Reid again tried a neat chip over Gonet, but the Renfrew striker didn’t get enough height on his shot, and the Bankies stopper clutched the ball comfortably. In between Reid’s two chances, Gary Lynn fired a free kick well over the Renfrew cross bar.

As the half-hour approached, the Bankies began to regain the upper hand. Most of the home side’s dangerous play was coming down the right wing, and a Moffat cross was clipped over the bar by Cairney first time. Two minutes later and McPherson set up Dymock but his effort missed the target.

Next, Tommy Martin switched the play from left to right where he found Paul Allum who sent a great delivery into the box, but Dymock headed over from a decent position. The break arrived goalless with Clydebank not quite doing enough – as the home side – to break the deadlock.

For the first fifteen minutes or so of the second half Clydebank enjoyed their best spell, putting the Frew under considerable pressure, but the final ball was all too often lacking, and when a chance was presented the composure to finish was also absent.

A case in point was after 48 minutes when MacKinnon sent Cairney clear with a superb back heel. The Bankies midfielder had time to steady himself to shoot, but his shot – which was going wildly off-target anyway – deflected wide for a corner. From the corner kick Dymock gave himself a chance to shoot inside the box, but his attempt was well charged down.

McPherson was next to sent a shot off target after 50 minutes when his free kick effort curled into the side netting. Renfrew still carried a threat however, and Stefan Gonet had to be alert to turn away a shot from Gray who had cut in from left wing. But minutes late and it was the Bankies missing another chance. Dymock done well on the right wing to cut the ball into the box, where MacKinnon cracked in a first time shot, but this time with goalkeeper beaten the ball cannoned off a Renfrew defender’s midriff.

MacKinnon was looking dangerous at this stage, and he worked a superb one two with McPherson at the edge of the box. Just when it looked like he was about to roll the ball into the net, the offside Stevie Dymock got in the way and the ball trickled wide. As a Gary Lynn corner kick nearly went straight into the net, and the ball was only cleared in desperation it looked like the Bankies might be the side to open the scoring. Then disaster struck.

Renfrew broke away on the right hand side, and the ball was chipped towards the Bankies penalty box. Tommy Martin was chasing back with Gray on his tail. Martin had the advantage, but as he went to clear the ball he missed it and only contrived to pull down the Renfrew winger. Even though the ball struck Martin’s standing foot, it was hard not to disagree with the decision. McLean stepped up and made no mistake to put Renfrew a goal up against the run of play.

The Bankies struggled from this point, as the visitors were quite happy to get men behind the ball, but MacKinnon was still probing the opposition defence. He dinked the ball to the back post after another lung bursting run. Dymock rose at the back post, and this time he hit the target, but Bell saved well at his near post.

Worse was to befall the Bankies and Tommy Martin in particular after 74 minutes. Already booked from the penalty incident, he tried to chip the ball over Mort’s head. As both players fought for the ball, the referee penalised Martin. It was a soft-ish foul, but inexplicably the whistler gave the Bankies midfielder a second yellow card. Renfrew had barely troubled the Bankies goal and now the home side were staring defeat in the face.

In fact, the nearest Renfrew came to another goal was when the Bankies Brian Smith almost volleyed the ball into his own net from a corner kick. A goal and a man down the best the Bankies could come up with was a Mark Hailstones free kick that went comfortably wide.

It was a bad defeat against a side who were there for the taking, and the toothless display up front showed up the value of missing striker Dallas, and Mackie. With three defeats on the trot, the Bankies need to pick up the pieces quickly, as three tough encounters in the shaped of Girvan, Glenafton and Shotts await.