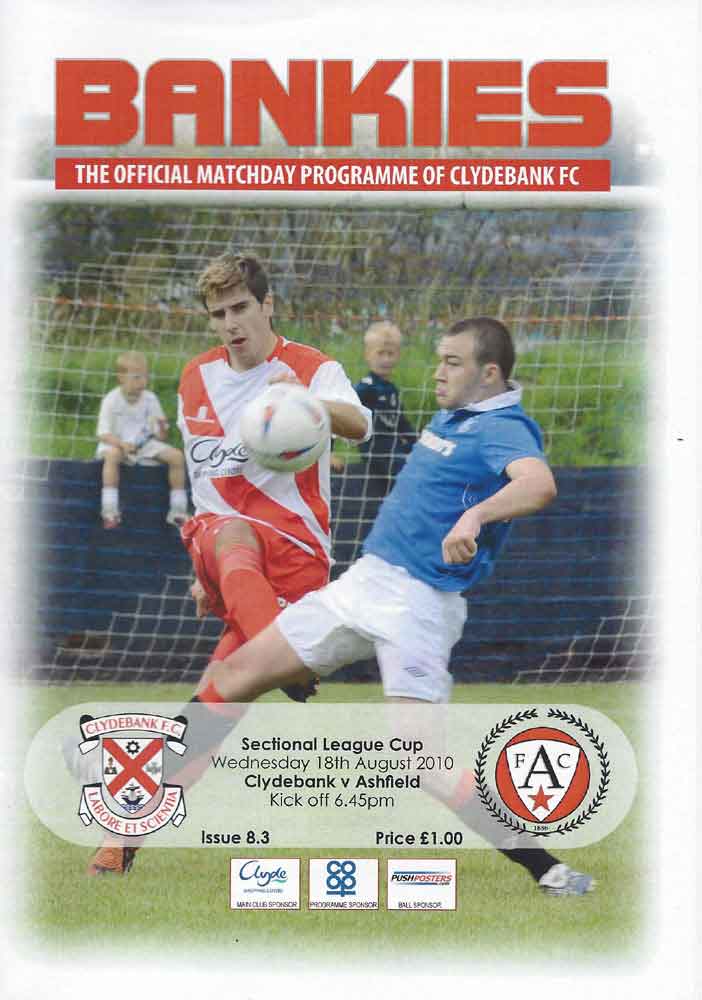 The Bankies slumped to another defeat in their final sectional league cup match against Ashfield as they turned in a woeful first half performance. Two down at the interval, Darian MacKinnon pulled one back in a better second half showing, but any chance of a comeback was quashed by two straight red cards that left the Bankies with one of their worst ever finishes in this tournament.

Ashfield have been scoring freely in the group stages, whilst the Bankies have been struggling for form and this was evident right from the start. In the opening eleven minutes of the match Ashfield had five attempts on goal, and it was no real surprise when one of these shots found the target. Wright, who had got behind Allum, collected a through ball on the right hand side and he drilled the ball home smartly after only eight minutes.

For the record the other chances were a shot by Chalmers that went over the bar, a near post flick from a corner that went just wide, an audacious free kick from the halfway line by Smith that nearly caught Campbell off his line, and a free header from McShane that skidded wide. In between these chances, Ross Campbell managed a shot that went wide.

After quarter of an hour, the Bankies had their first real chance when Prior spilled a Gary Lynn free kick in the Ashfield goal. MacKinnon pounced on the loose ball, but there were too many players on the line and the ball deflected wide for a corner. Two minutes later and the home side almost equalised. In a neat build up, Hailstones dinked the ball over the Ashfield defence and Dymock prodded the ball just wide of the post with Prior beaten.

Ashfield however, dominated in the main, and Clydebank’s usually reliable defence were failing to clear their lines properly. This was highlighted when Tommy Martin’s attempted clearance went straight to a Chalmers. From here, the Field midfielder cut inside and unleashed a shot that Campbell could only parry away. McShane hit the rebound first time, and luckily for the Bankies he dragged the ball wide of the goal.

The warning signs were not heeded and a minute later it was two for the visitors. Allum was the guilty party this time, and Wright finished in a similar fashion to his first goal to put Ashfield in the clear.

The Bankies did manage another decent effort on goal before the turnaround when Tommy Martin controlled a Hailstones cross, but the Bankies new boys shot was tipped over the bar by Prior.

During the break Highlands replaced Green and the Bankies became more positive. This should be countered by the fact that the visitors did not need to press the match now as they were comfortably in the lead and they needed to lose six goals in order to be eliminated from the competition.

Nevertheless, it was much more encouraging to see the Bankies take the game to Ashfield. The home side forced a series of corners, and one of these finally bore fruit after 56 minutes when MacKinnon headed home from close range at the back post. This was Clydebank’s most productive spell of the match, and Tommy Martin sliced a shot wide from another corner only minutes later.

After 62 minutes, the Bankies had the ball in the net after a great passing move down the right wing. Smith delivered a superb near post cross that Dymock finished off. However, the goal was chopped off as the ref adjudged Dymock to have handled the ball. The Bankies striker was booked for the offence and he didn’t seem to complain too much.

As the match entered the final twenty minutes, it appeared that it would fizzle out, but Clydebank were to suffer two straight red cards in a ten minute spell. MacKinnon was first to receive his marching orders for an offence still to be determined. There was a bit of a stramash outside the Ashfield box, and McShane fell to the ground and appeared to handle the ball. MacKinnon went for the ball, and this led to a bit of pushing and shoving between opposition players. When the ref controlled the situation, he handed a straight red to MacKinnon. The only other player to be cautioned in this incident was Hailstones for complaining.

If the first sending off seemed less than clear, then there was nothing ambiguous about the second. Highlands, obviously frustrated at losing the ball earlier, decided to chop the legs away from an Ashfield player in a premeditated fashion. This time the ref had no option, and hopefully this is a lesson learned for the youngster.

Ashfield had a couple of chances to finish the game with breakaways, but poor finishing by Chalmers then Ferguson let them down. Funnily, it was the nine men Bankies who finished the stronger side. Hailstones missed a real sitter when Kilpatrick nodded a diagonal ball on. Prior was well off his line and all Hailstones had to do was lift the ball over his head. He managed that part, but unfortunately he put too much on it and the ball went over the top. In the last minute Kilpatrick had a fair shout for a penalty when he was brought down inside the box, but the ref and linesman did not entertain the claim.

This league cup campaign is best forgotten, but it has left manager Budgie McGhie with some big decisions to make ahead of Saturday’s league opener against Renfrew. The games so far have not given much of an indication of what the strongest line up is likely to be. What is certain, is that the opening sequence of league matches couldn’t be much tougher, so it’s vital these decisions are the right ones.