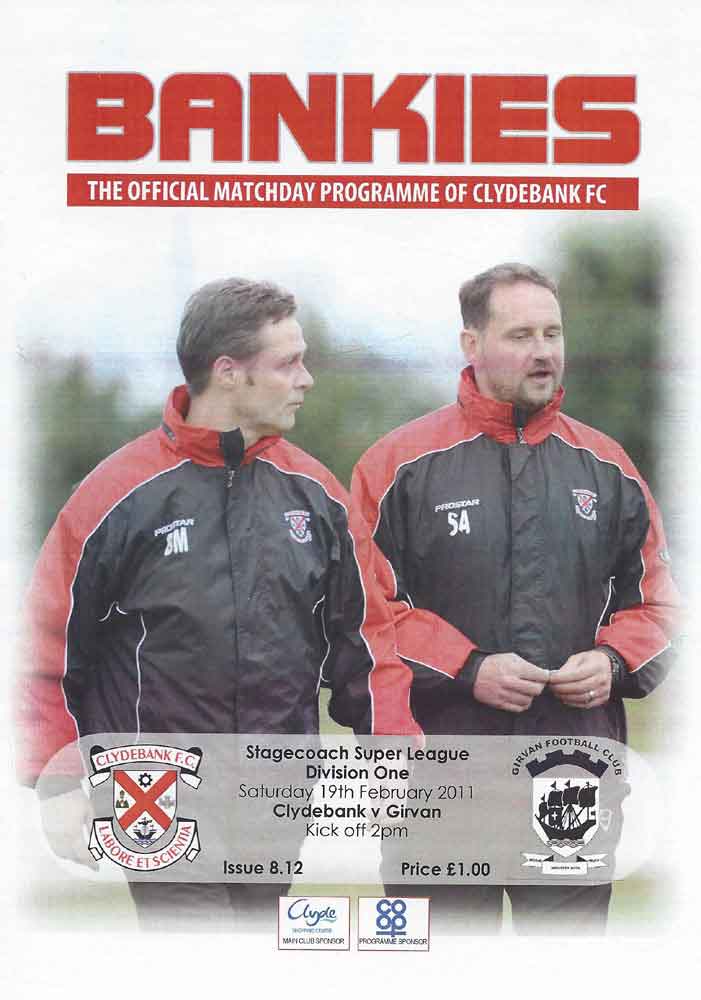 Clydebank rose to the occasion to take all three points in their “must win” top of the table clash against Girvan at Holm Park. With only three points between the sides coming into the match, but three games in hand for the Seasiders, the Bankies could scarcely afford any other result than a victory. The fans were to go home happy as Stevie Dymock notched another fine goal, and was provider for the tireless Darian MacKinnon who sealed the points in the last minute.

After last week’s top performance against Glenafton, Budgie McGhie would have been hard pushed to make any changes to his side, and he did not. Stevie Dymock who produced his best performance of his Bankies career at Glenafton started from where he left off when he almost opened the scoring in the first minute. He won the ball for himself on the right hand side and drove diagonally towards the goal, but he dragged his shot wide of the post under pressure.

The visitors probably shaded the opening quarter of an hour on a gloopy pitch that only passed a morning inspection. However, they did not unduly trouble Campbell in the Bankies goal. A turn and shot from Cashmore and a Murphy trundler both went wide.

The Bankies broke this spell of ascendancy for the visitors when Paul Allum was unlucky to see his left footed shot from the edge of the box deflected out for a corner with Dymock only a whisper away from getting something on the ball.

The sides were reasonably evenly matched and the match began to get bogged down with neither side able to master the tricky conditions. Even when Girvan hit the bar after half an hour it was accidental. A mis-hit cross ball skimming off the face of the bar.

Clydebank ended the half the stronger side. Leavy in the Girvan goal made his first of many vital stops when he pushed away a Hailstones thunderbolt, then he stopped a dinked effort from Murray, who did well to make space for a shot at the edge of the box. The Bankies thought they had broken the deadlock right on the stroke of half time when Barry Crawford got on the end of a Paul Allum corner kick. His headed effort was going into the net at the far post, but a Girvan defender popped up to head the ball clear via the cross bar. The Bankies players all claimed for a goal, but the red and his assistant were not interested.

A draw was not going to be enough for the Bankies, so it was imperative that they pushed onto their opponents in the second half, and they did so and more. Straight from the whistle the visitors were on the back foot, and gave away a free kick against Hailstones in a good shooting position. Paul Allum stepped up and curled the ball sweetly around the wall, but Leavy got down superbly on his left hand side to push it away with both hands.

Moments later MacKinnon was sent free by a long ball down the left channel. The Bankies powerhouse mishit his shot, but a series of ricochets and a blocked attempt by Dymock saw the ball finally spin out of play much to the relief of the Girvan defence.

A goal was coming and it arrived after 50 minutes. Darian MacKinnon showed great vision on the right hand touchline to roll the ball in front of the incoming Tommy Martin. The Bankies midfielder shot low first time, but it did not have enough power. Fortunately, Stevie Dymock was on hand to sweep the ball into the net from eight yards to continue the strikers rich vein of form.

Girvan tried to get back into the game but were finding the Bankies defence to be in no mood to give anything away. The best they could manage was a decent free kick effort from Connell, but Campbell claimed the ball at the second attempt. It was down at the other end that all the goalmouth action was occurring. Murray should really have wrapped the points up after 56 minutes, but he headed the ball inches wide of the left hand post from a McMenamin free kick.

The Bankies continued to get behind the Seasiders rearguard. A tremendous ball across the six yard box from MacKinnon was just turned away for a corner by Cunningham, and then Hailstones blasted wide. Girvan almost showed how precarious a one-goal lead could be, when substitute Harvey squandered the Seasiders best chance of the match. He made space on his left-hand side but rushed his shot and it went straight to Campbell giving him an easy save.

The Bankies continued to push for a second goal with MacKinnon at the heart of the action. It was one of his trademark runs that set up Hailstones for a first time shot that Leavy was equal to and again he saved his side. Hailstones was then replaced by McPherson who almost had an immediate impact. Murray split the Girvan defence down the middle with a razor sharp pass/ McPherson latched onto hit but Leavy was the Girvan hero again by making a fine stop.

As the match entered the final ten minutes Girvan were still a menace but they were more and more being restricted to long range efforts with Shankland well off target with an attempt. It wasn’t long before the action was bearing down on Leavy again, particularly in the shape of Darian MacKinnon. In a pulsating run it looked like he would (and he should have) burst through the Girvan defence, but he squared it to Dymock who was not in the best shooting position. However, in his current form the Bankies striker took it on only for Leavy to save yet again.

It looked like it was going to be a single goal victory despite the home side’s dominance, but with the 90 minutes completed the Bankies finally added their second. Girvan lost the ball just inside the Clydebank half. Dymock seeing MacKinnon making a run simply flicked it beyond the static Seasiders defence. MacKinnon expertly rounded Leavy before stroking the ball into the empty net from 20 yards to seal a deserved victory.

These last two matches were as good as the Bankies have played all season, and the fans left the ground saying more of the same please. It was pleasing to back up the Glenafton result with another good performance and with 10 goals scored in the last 4 matches the goals are starting to come as well. Despite being top of the league the Bankies are still in a vulnerable position due to the chasing pack all having games in hand. This is now the time to keep up the level of performance and make life as difficult as possible for all these sides who have designs on our top spot.