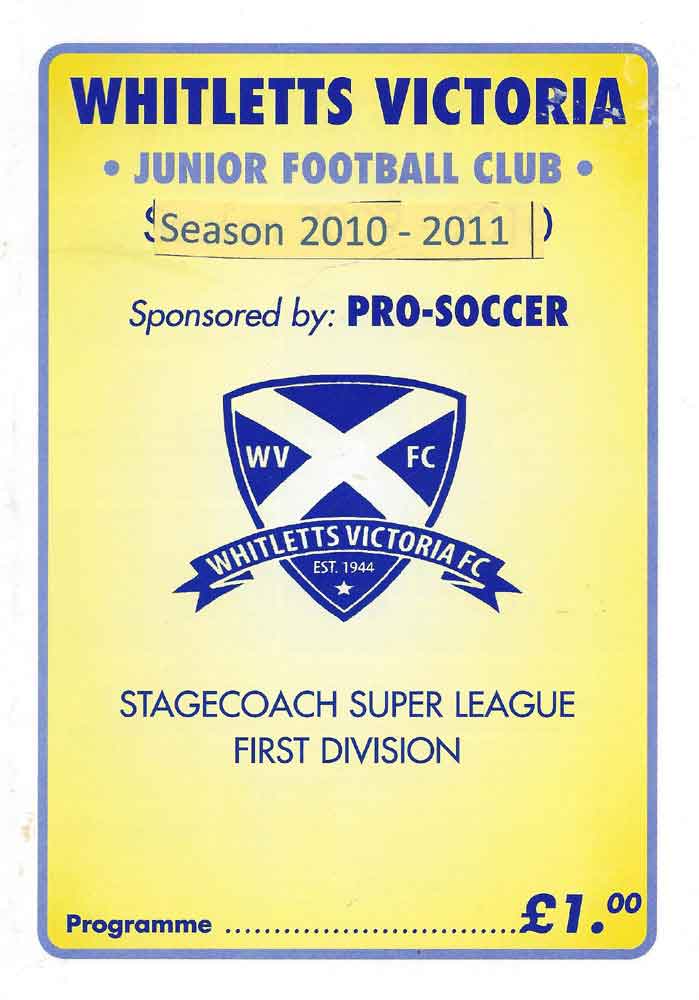 Clydebank consolidated their position at the top of the league table with a superb victory over second placed Whitletts Victoria at their temporary home at Dam Park. Goals in the first half from front duo Dymock and Hailstones put the Bankies in a commanding position after Harvey was sent off for a reckless challenge on Tommy Martin. Gordon Moffat put the Holm Park men out of sight with Main grabbing a late consolation for the Vics.

After two convincing victories on the trot, Budgie McGhie would have been mad to have made any changes to an on form Bankies side, and he wisely chose to go with the same starting eleven for the third consecutive match. Whitletts are temporarily playing their home matches at Dam Park after their own Voluntary Park was closed for health and safety reasons. Dam Park once hosted a senior match between Ayr United and Clydebank in their senior guise. The league cup clash of 1972 resulted in a 5-0 mauling for the Bankies.

With three games in hand in favour of the Ayrshire men and only a point separating the top two sides in the league anything barring a defeat would have been ideal for Whitletts. The Bankies really needed to collect all three points to put the pressure on Whitletts and the chasing pack.

Clydebank set up with the 3-5-2 formation that has served them so well recently, and with Whitletts not showing much adventure the opening quarter of an hour passed by without any incident of note. The Bankies had edged the early proceedings, and it was they who carved out the first opportunity after 17 minutes. Hailstones fed the ball out to the right channel to MacKinnon who found Stevie Dymock just inside the box. The in-form striker side stepped a defender and curled in a left-footed shot that had Douglas scurrying across his goalmouth to push the ball away.

This piece of action brought the game to life, and three minutes later Dymock was brought down inside the box by Whitletts keeper Douglas. It was a penalty of the stone wall variety and the Vics stopper was booked for his troubles. The Bankies have suffered plenty of woes recently from the penalty spot with more than their fair share being missed. Tommy Martin took over the job after he scored against Cumbernauld with his first attempt. However, he joined the litany of failed spot kick takers when he ballooned the ball well over the Whitletts cross bar.

After giving away the spot kick and getting away with it, Whitletts then proceeded to shoot themselves in the foot only five minutes later when Harvey received a straight red card for a dreadful stamp on Tommy Martin. It was a needless challenge considering the ball was in the Bankies half of the park.

If Clydebank had been on top then this certainly opened the floodgates for the Bankies to pile on the pressure, and with 35 minutes on the clock the deadlock was broken. Stevie Dymock was quick to react to a loose passback to Whitletts stopper Douglas. The keeper attempted to clear the ball first time, but the Bankies striker managed to get a block in. The ball spun high into the air, and with Douglas looking bewildered as to its whereabouts, he only had to look behind him to see the ball drop just over the line from a near impossible angle. It was a strange and fortunate goal, but Dymock deserved his slice of luck for his tenacity.

A minute before the break and the Bankies extended their lead. A free kick was awarded on the right hand side near the corner flag. McMenamin delivered a quality ball with pace to the near post where a perfectly timed run from Mark Hailstones met the ball with his head and guided it superbly into the far corner of the net.

Clydebank opened the second period in the fashion as they ended the first. With a goal! Another superb delivery by McMenamin – this time from a corner kick - was headed goalward by the in rushing Barry Crawford. Douglas produced an outstanding point blank save, and the ball was scrambled to the edge of the box. It was picked up immediately by Gordon Moffat who took one touch onto his right foot before unleashing a bullet shot low into corner of the net.

This ended the match as a contest and the intensity dropped somewhat. Despite having a man advantage, the Bankies three goal lead meant they could contain any Whitletts attacks and choose when to come forward. After 55 minutes, Santos had the home side’s first decent chance of the match when he scooped the ball over the bar from six yards when he should really have hit the target. At the other end Stevie Dymock beat the offside trap on the right hand side and he sent in a cross that Hailstones controlled on his chest. He then hit a first time shot that was well dealt with by Douglas.

With the Whitletts attack being toothless, it was left back Craig Main who became the home side’s most potent threat with a trio of attempts on the Bankies goal. It took until the 79th minute for the first one to arrive when the defender gave Whitletts their first shot on target with a side footed effort that resulted in a comfortable save for Liam Campbell. Main’s second shot on goal after 83 minutes gave the Vics their consolation goal, when he rocketed his shot into the net from a good 25-30 yards out. Liam Campbell who was chasing his third consecutive clean sheet will be a little disappointed to have lost a goal from that distance despite it being a well struck shot. Campbell was more than a match, however, for Main’s third effort as he turned his free kick round the post.

Clydebank have now beaten their two main promotion rivals in a row, and convincingly as well. After a period of finding goals hard to come by the Bankies have now rattled in 13 in their last 5 matches. The change in formation coupled with the signings of the experienced Murray and McMenamin has given the side a whole new dimension and the improvement since the first half of the season is evident to all. There is still a lot of work to be done for the Bankies to achieve their goal of promotion, and it is important that the same level of commitment and desire is shown against the clubs lower down the table. This is an area that has let the Bankies down in recent seasons where points have been surrendered to sides in the drop zone. Girvan and Whitletts have still to face each other twice, so it is vital that the Bankies take advantage of the point that will be dropped in these matches.