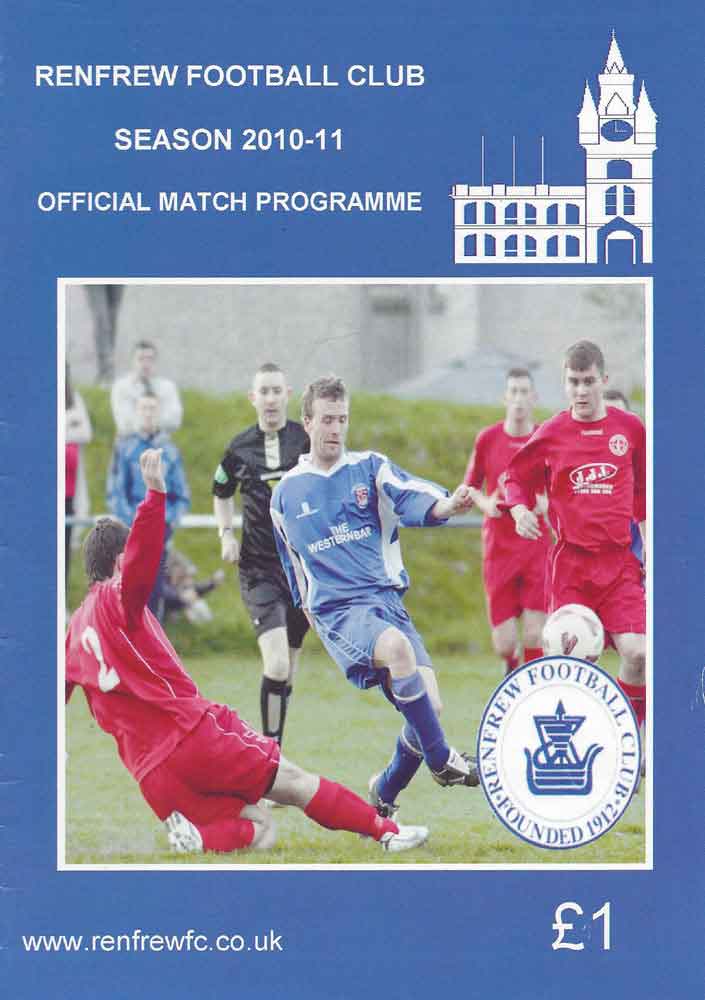 Mark Hailstones fired home a double to hand the Bankies three vital promotion points against Renfrew in what ended up to be a bad tempered league encounter at Western Park. Clydebank’s goals sandwiched the undoubted pivotal moment of the match when the Frew were awarded a soft penalty and found Liam Campbell in no mood to be beaten. This allowed the Bankies to go on to make it four wins in a row and in the process open up a four point gap at the top of the table.

An ankle injury to Tommy Martin prevented Budgie McGhie fielding the same line up for the fourth consecutive match, so young Michael MacAdam, who has shown up well in recent friendly matches, came in for only his second start. Renfrew lined up with a couple of familiar faces in the shape of Kevin Bell and Clinton Maxwell.

It didn’t take long to realise that the strong wind was going to prevent any kind of decent football being played. The pitch was rather uneven as well and this led to the worst kind of pinball action with good passing moves being at premium. It was the home side, playing into the wind, who adjusted better in the early stages. Cameron Mis-kicked a shot into the air after four minutes, which Liam Campbell dealt with comfortably. A minute later and a defensive lapse almost allowed Clinton Maxwell to open the scoring. A quick free kick slipped in to the box caught the Bankies defence napping and only the cat-like reactions from Liam Campbell prevented the ex-Bankie from giving the Frew the lead.

Slowly but surely the Bankies edged themselves into the match, and the first attempt on goal came from Mark Hailstones after nineteen minutes, an inventive hooked effort that had Bell scrambling across his goal line to save. This ignited Clydebank’s best spell of pressure in the first half. At the midway point a cross from the right wing by Paul Allum was cut out by the Renfrew defence, but only to the edge of the box where Kevin Murray was well positioned. Unfortunately he flashed his first time shot wide of the goal. A couple of minutes later from a near identical position, but this time from the left, the ball came to MacAdam but his effort fizzed just past Bell’s left hand post.

Some of the Bankies passing was becoming careless in the middle of the park, and attempted clearances were being rushed, and a combination of putting themselves under pressure led to Renfrew earning a free kick on the edge of box. Maxwell took the kick and he was disappointed as Campbell flew across his line to touch his fine effort round the post for a corner.

Clydebank continued to get into trouble by not clearing their lines properly and after half an hour Cameron shot wide. Again, the same issue allowed Dickie to get a cross in from the right wing and Prentice ruined a good opportunity by slicing his volley well over the bar. Renfrew were enjoying a good spell of pressure now and had Reid been an inch taller he may just have put his header into the net instead of over the bar when Maxwell’s cross from the left wing had set him up.

It was against this backdrop that Clydebank took the lead after 42 minutes. Finally putting a move together that got the ball down the wing in a good position. Stevie Dymock adjusted his feet to send a right footed cross into the box. Smith foolishly moved toward the ball instead of staying tight on his man. He was caught in no mans land leaving Mark Hailstones in acres of space to swing his boot at the awkwardly bouncing ball which he caught just right to send into the far corner of the net.

Clydebank could have extended the lead only moments later when a long ball was judged well by MacKinnon. He knocked the ball past Bell, but Shearer was on hand to thump it over his own crossbar.

Renfrew’s own promotion hopes, whilst not resting entirely on this game, were certainly going to take a severe blow if they were to be on the receiving end of a defeat. Understandably, the forced the issue early in the second half. Shearer was unfortunate not to equalise when his header from a corner hit the crossbar and the ball was subsequently hacked away from the goal line. The Frew didn’t look likely to break down the Bankies defence from open play and it was from another set piece that their next chance came. Ross Campbell was adjudged to have handled the ball on the edge of the box, but Nicholson’s attempt hit the wall and spun away for a corner.

On the hour Stevie Dymock had a great chance to continue his recent scoring run. Barry Crawford nudged the ball into the box on the left-hand side. The ball was crying out to be hit first time as Dymock ran on to it, but he delayed just that wee second too long and his shot blazed over the bar as he became under pressure from the Renfrew defence.

Immediately after this, the defining moment of the match occurred when Reid charged into the box. Gordon Moffat put his arm across the striker’s shoulder, and although it was technically a penalty it was of the soft variety. Clinton Maxwell took the kick sending it low to Campbell’s left-hand side. The Bankies stopper dove full length and stopped the ball one handed. He was quickly to his feet and smothered the ball before the incoming Renfrew forwards could reach it.

Perhaps, Renfrew sensed at this point that they may not get anything out of the game and the tackles started to turn a little nastier. Smith left a boot in on Dymock, which left the striker requiring treatment. From this point onwards there was bad feeling particularly coming from central defensive pairing of Shearer and Smith. MacKinnon and Dallas when he came on were also involved in altercations with the Renfrew twosome. Surprisingly, referee Newlands didn’t reach for his cards when he could quite easily have done so.

In amongst this Mark Hailstones scored the killer second goal and it had a touch of fortune about it. A through ball from Murray, which, in essence, was a tackle, deflected into the box from the head of Dymock. It found Mark Hailstones who calmly rolled the ball under the body of Bell to net his fifth goal of the season.

With just over quarter of an hour remaining the scoring was complete but the needle between the players was becoming more evident. Thankfully, the ref controlled the remaining time well and even stood between Shearer and MacKinnon as he blew the final whistle in order to diffuse any potential situation.

The games with Renfrew have been fraught with tension in recent encounters, so to come away unscathed with three points was a great result. The Frew had only lost once in their last seven matches underlining how important this victory was. The Bankies have now opened up a four point gap at the top of the table, and it is important to keep putting points on the board to keep the pressure up on their promotion rivals.