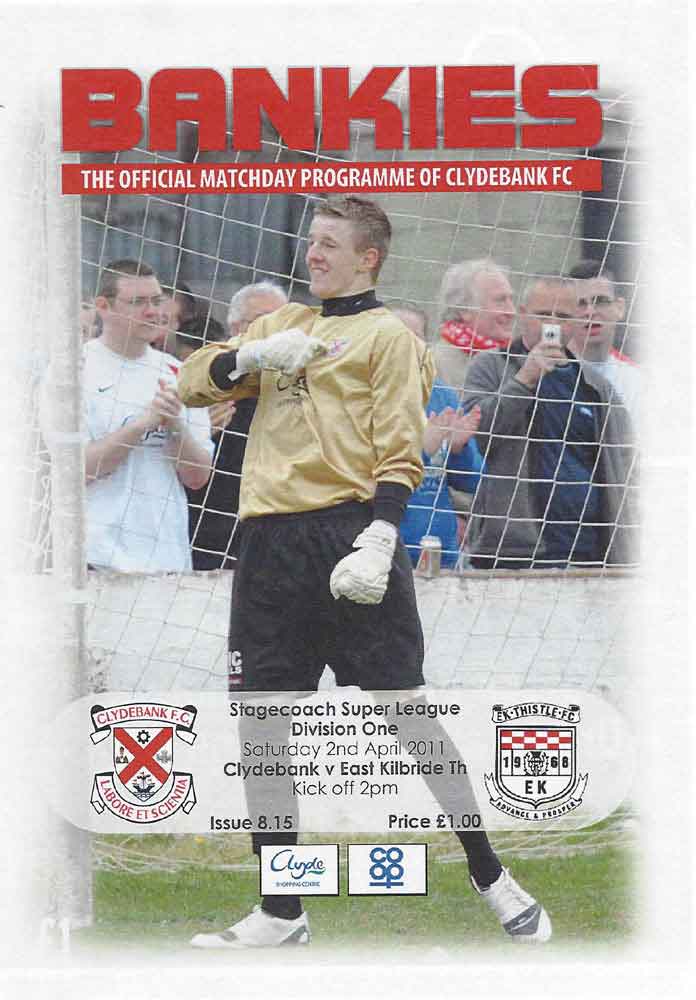 Clydebank’s recent good run of form was brought to an end by a dogged East Kilbride Thistle side who triumphed over the Bankies for the third time this season. Stevie Dymock scored his sixth goal in as many games to equalise Colin Williamson’s twelfth minute thunderbolt, but with neither side looking likely to grab a winner, Gordon Moffat conceded a penalty with only ten minutes remaining. Chaplain netted and despite a late rally from the Bankies, East Kilbride held on to take the points

Team news going in to this match wasn’t good with recent signings Kevin Murray and Paul McMenamin both missing due to injury. Both players had been influential in the Bankies five match unbeaten run, and their presence was to be sorely missed. Scott Highlands and Martin McComish deputised for the injured duo. Better news was that new signing Charlie Hobbs was added to the squad and took his place on the bench.

Straight from the kick off, it was apparent that East Kilbride weren’t going to be overly adventurous, and they took every opportunity to break up the play and not allow the Bankies any time on the ball. In the opening ten minutes Clydebank prodded and pushed but found the Jags defence to be in resolute mood. So much so, that the Bankies failed to register a shot in goal in this period.

In fact it was East Kilbride who had the first attempt at goal when Chaplain curled a shot well over the crossbar. A minute later and the visitors took the lead, and you won’t see many better goals than this.
Liam Campbell had only lost two goals in his last five outings and both of these were top-drawer finishes, and unluckily for the Bankies stopper this was another one. A fine run by Williamson went unchallenged and from twenty yards out he rifled the ball into the top corner of the net giving Campbell no chance.

Clydebank quickly went on the offensive and within five minutes scored a deserved equaliser. Darian MacKinnon was instrumental has he hit the right hand side touchline and crossed to the near post. Murdoch in the Thistle goal will be disappointed as he waited on the ball to come to him, and this allowed just enough time for Stevie Dymock to nip in front of him and head the ball home.

Goalmouth action was at a premium and East Kilbride’s tactics were proving to be difficult for the Bankies to overcome. Orr and Chaplain became the first of six Thistle players to be booked as they strove to keep the Bankies at bay. When Clydebank finally did get behind the Jags defence they weren’t able to make the most of it. Stevie Dymock crossed for Hailstones who looked like he was about to burst the net, but he slipped at the vital moment and the ball dribbled wide of the post. Their seemed to be an issue with Hailstones’ studs, and Budgie McGhie lambasted him for this in no uncertain terms.

With the half closing in an increasingly niggly fashion, the second opened with two stunning diagonal passes. The first one was left to right into the box by MacKinnon to Highlands, but the speedy wing man couldn’t get a finish on the ball. Then, Allum found Dymock with a similar pass from the other side of the park, but his first touch was too heavy and it rolled into the path of Murdoch.

Clydebank continued to be the aggressor, and Dymock was unlucky to be called offside from a MacKinnon through ball, and then Hailstones wasted another good chance when he screwed the ball past the post from a decent position. This was his last action as Dallas immediately replaced him

As the games entered the final quarter, both sides swapped goalscoring opportunities. First, Martin McComish blasted the ball over the bar after a great through ball by Allum, then Williamson almost grabbed his second from East Kilbride’s first real opening of the second half. A cross from the left found Williamson rushing in on goal, but he seemed undecided whether to kick or head the ball and he ended up doing neither as the ball squirmed away.

With thirteen minutes remaining East Kilbride got the decisive goal, and it came from the penalty spot. Gordon Moffat was to blame as he wrapped his arms around a Jags forward. It was a bit silly by Moffat, as the forward wasn’t certain to get the ball anyway. Chaplain made no mistake when he finished from twelve yards.

The Bankies immediately introduced Hobbs from the bench, and despite a major rally the equaliser never came. It was Hobbs who had the best chance when he received the ball with his back to goal after s stramash of Arthur Montford proportions, but the striker was unfortunate to see his shot on the turn graze the outside of the post.

Clydebank will be disappointed that they did not take a point from match, as neither side really deserved all three points. East Kilbride executed their plan well, and never allowed the Bankies to get going. They defended superbly, and took the few opportunities that came their way. Thistle have successfully implemented this game plan three times against the Bankies this season, and it is disappointing to say the least that we have been unable to find a way around it. It is not the time to feel sorry for ourselves however, and it is important that the players pick themselves up for next weeks match at home to Kilwinning.