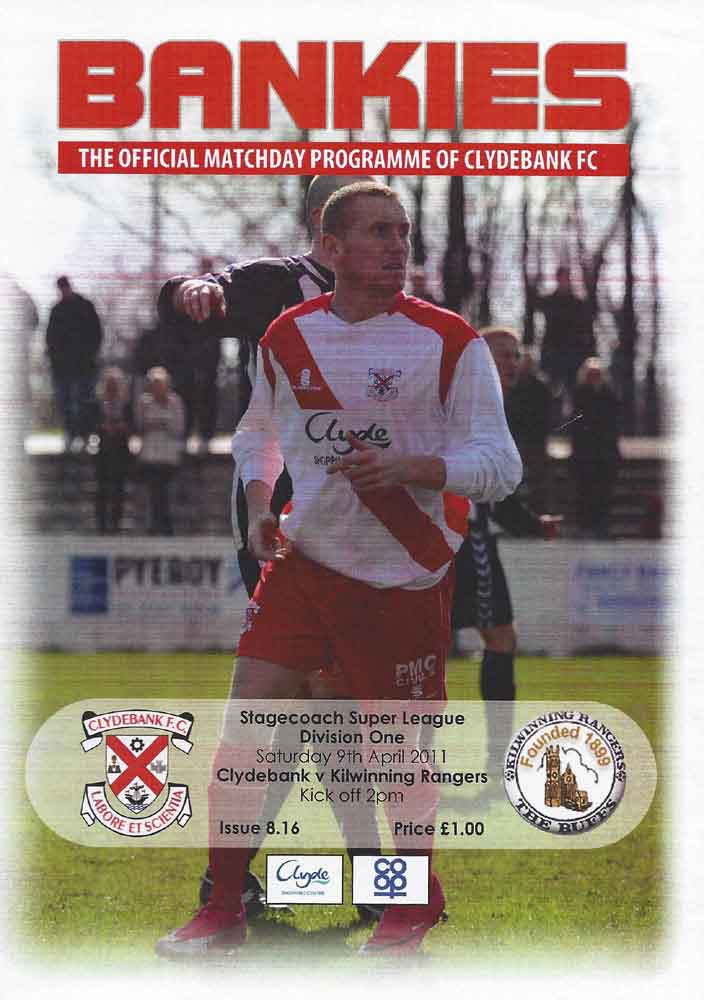 Clydebank strengthened their position at the top of the table with a resounding victory over Kilwinning Rangers with two first half goals from Gordon Moffat, and a killer third midway through the second period by new recruit Charlie Hobbs. It was the perfect response after last weeks disappointing result against East Kilbride, and the news that all of the other top six clubs dropped points not only put the icing on the cake but a nice wee cherry as well.

On a beautiful day at Holm Park, the Bankies took to the field with a couple of changes to the starting eleven. Highlands and McComish dropped to the bench, allowing Stevie Dallas to make his first start since November and he was paired up front with Charlie Hobbs who was making his second full debut for the club. McMenamin and Murray were both still unavailable for selection due to injury.

The pitch was looking great despite the rigours of an awful winter and two clubs using it, the warm conditions were just perfect for the Bankies passing game. However, it was the visitors who were first to settle. A Michael Fulton shot was deflected for a corner kick and his namesake Michael Fulton headed just wide at the back post from the resultant kick.

The Buffs defence were looking edgy as the home side began to press, and they were shocked as the Bankies opened the scoring with their first meaningful attack. A Hailstones free kick was head out to the right flank. Stevie Dallas sold the defender a dummy to hit the bye line, and his cross found Charlie Hobbs at the back post. The flame haired striker volleyed the ball goalward, where Gordon Moffat was perfectly placed to prod the ball home from a couple of yards out.

Within a couple of minutes, it was almost two as Richmond fumbled a cross ball at his near post. Despite the attentions of the goalkeeper and Holden, Stevie Dallas was nearly able to steer the ball into the net, but it was eventually scrambled away for a corner. The Bankies were controlling play now, and had a decent shout for a professional foul after 17 minutes when Stevie Dallas appeared to be held back by the last man as the ball was lofted over the defence. Neither the ref or linesman were interested, however.

Midway through the half, the Buffs had the nearest thing to a goal they would see all afternoon when McDermott was given too much space around 25 yards from goal. With no other options in front of him he decided to unleash a shot which, with the aid of a deflection, just crept past Liam Campbell’s right hand post.

However, the real goalscoring opportunities were coming down the other end and Stevie Dymock will be kicking himself that he didn’t take one of the two chances that came his way. Firstly, Dallas set him up at the edge of the box but Richmond beat out his vicious drive. Hobbs followed up, but he was called offside by the linesman. The second effort came after 35 minutes when Hobbs, thinking quickly, played Dymock clear on goal after being awarded a free kick. The ref let it go and Dymock cracked the ball diagonally wide of the post when he should really have scored.

The Bankies were moving the ball about superbly now, and Tommy Martin worked a fine one-two with Stevie Dallas. The midfielder wasn’t too far away with his shot as Dallas picked out his run into the penalty box.

With the clock clicking over into injury time, the Bankies were awarded a penalty. Stevie Dallas beat Richmond to a chase for a through ball, and it was probably a tough decision on the goalkeeper as there didn’t seem to be a whole lot wrong with his challenge, however, referee Ainslie pointed to the spot. Gordon Moffat showed recently with his spot kick in the shoot out against Yoker that he knows how to finish from 12 yards. He made no mistake this time either as he swept the ball high into the left hand corner of Richmond’s net to give the Bankies a two goal lead going into the break.

Kilwinning started the second half positively as Fulton volleyed over the bar from a Holden knock down, but this was countered immediately with MacKinnon who ran the length of the park before seeing his shot deflected for a corner

In general terms, Kilwinning weren’t playing badly. The big difference between the sides was the ability of Clydebank to make goal-scoring opportunities while the Buffs had a number of poorly executed half chances. While the likes of Sloan and Mitchell were shooting weakly past the post, the Bankies had Hailstones crashing a free kick off the cross bar, and Dymock testing the keeper with a header.

The inevitable third goal arrived midway through the half , and it was courtesy of one of Darian MacKinnon’s penetrating runs. We’ve seen it several times this season and Charlie Hobbs applied the finishing touch from the lay off. Not Hobbs’ best finish but they all count.

The remaining quarter of the match allowed the Bankies to play in a relaxed fashion and they moved the ball about superbly at times and could quite easily have increased their lead. A wonderful piece of interplay between Dymock and Hobbs saw the latter crash the ball off the upright, then when Gordon Moffat won the ball twenty five yards out, his hat trick headline was dashed as Richmond dived full length to his left to push the defender’s shot away. McPherson and Hobbs had further chances but there were no further goals.

This was the ideal tonic after East Kilbride brought the winning streak to an end last week. A great performance all round, with a handsome scoreline have put the Bankies firmly in command at the top of the table. To have every other result go our way was an added bonus as a six point gap has now opened up between the Bankies and second placed Whitletts. There is still much work to be done, so it important not to take our eye off the ball and make it as difficult as we possibly can for the chasing pack.