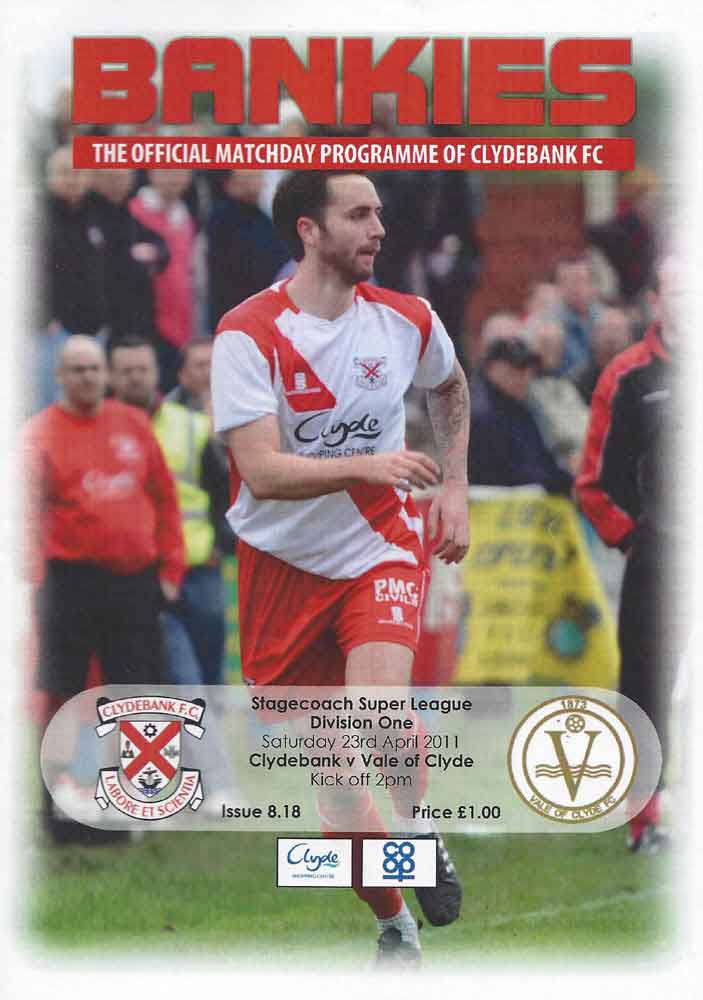 The pressure of leading the league may be getting to some of Clydebank’s players as they struggled to overcome Vale of Clyde at Holm Park. The Bankies created and squandered a hatful of chances, and the longer the breakthrough took, the more nervy and desperate they looked. When the winning goal arrived with only eight minutes remaining courtesy of a Ross McPherson header, the relief from the players and the terraces was evident to all.

This was a vital encounter for both sides with Glenafton racing up quickly behind the Bankies, and the Tin Pail desperately needing points in their battle against relegation. Clydebank lined up in more familiar lines from the side that beat Ashfield in midweek, with the youngsters returning to the bench. However, Stefan Gonet retained his place in goal, and Stevie Dallas was the odd forward out, as Kevin Murray returned to the starting line up.

McBride was the first to have a shot on goal for the visitors after two minutes when he cut inside and drove a low shot that was easily collected by Gonet. It was the Bankies who were looking dangerous through Paul Allum, though. Allum burst through the Vale rearguard on the right hand side, and delivered a dangerous near post cross that Dymock just failed to divert on target with his head. A minute later, Allum provided another cross, this time to Hailstones who chested the ball down and shot first time. Unfortunately, the powerful effort was straight down the throat of the goalkeeper.

The fast and open start continued when McKinstry volleyed over from 25 yards, then Gonet had to be down smartly to his right hand side to save a Jered Stirling free kick. Down at the other end Hobbs screwed a left-footed shot wide of the post, before Tommy Martin struck the wall with a free kick. Kevin Murray then burst through and only a brave save by Hamilton at his feet stopped the deadlock being broken. All this action in the opening quarter of an hour.

As the rain teemed down, Clydebank started to get a handle on proceedings and looked the likelier of the two sides to score. Ross Campbell nodded a cross from the left across the goalmouth, and Stevie Dymock headed straight at the keeper from close range. Any angle at all and it would have been a goal. The Bankies were getting closer and another chance went begging after 27 minutes when fine play on the right wing by MacKinnon and Allum resulted in a stramash in front of the Vale goal. As the ball bounced about Charlie Hobbs attempted an overhead kick that just sneaked past the wrong side of the upright.

The pressure continued when Kevin Murray cracked in a 25-yard shot, that Hamilton palmed away to his right. Hobbs followed up, but the keeper was equal to his shot from an acute angle. Hobbs made it a trio of attempts minutes later when his 25-yard strike was deflected goalward, but Hamilton dealt with the change of direction well. The near misses continued after 39 minutes when a quite brilliant first time cross by MacKinnon was missed by the outstretched boot of Dymock by the smallest of margins.

As the half came to a close the Bankies managed to register two further shots on goal. Firstly, Ross Campbell blazed over the bar after Charlie Hobbs tried a crazy back heel when he should have turned and shot, then Darian MacKinnon dipped a shot over the bar with Vale of Clyde protesting vehemently for offside

Half Time Clydebank 0-0 Vale of Clyde

Vale of Clyde had been let off lightly in the first half, and Clydebank have paid for profligacy in front of goal in the past. It was starting to look that way again when the Tin Pail began the second half much more brightly. Ardallany tested Gonet with a right-footed shot after cutting in from the right. The midfielder then set up Fraser Team whose shot didn’t trouble Gonet Unduly.

The shouts from the terraces were becoming a bit more frenzied as the Bankies were not creating very much at the start of the second period, however ten minutes in and the shots at goal began to flow again. The ball was knocked into the box, and then helped on by Hobbs. It sat up nicely for Murray on the penalty spot and he thrashed it toward goal, but Hamilton was down quickly to beat it away. The Vale couldn’t clear the ball, and ended up giving a free kick away at the edge of the box. Hailstones took it and was only a foot over with his effort.

Barry Crawford had two chances, one on either side of the hour. Both were shots from around 20 yards. The first one was a thunderbolt, but was bravely charged down by Coulter who threw his body in front of the ball. The second came at the end of a fine passing move, but Crawford sliced the ball wide of the goal. As the midway point of the half approached the Bankies forced a corner on the right hand side. Paul Allum hit an out-swinging cross, which Murray met superbly with his head. Hamilton was finally beaten but not the man on the line who managed to scramble the ball clear. After 73 minutes, the Bankies contrived to miss the best chance of the match. A nice cross-field move saw the ball pushed out to Paul Allum who delivered the ball into the danger area. Darian MacKinnon timed his run to perfection. Unfortunately, the same could not be said for his header, which flashed over the bar from only 6 yards out.

With so many opportunities passed up, it was almost inevitable that Vale of Clyde would take heart, and with Clydebank starting to lose their way a little the visitors looked like they might snatch the points on the break. The Vale twice in the space of a couple of minutes could have taken the lead. With 75 minutes gone, McBride charged through the Bankies defence. Barry Crawford thought about pulling him down, but the forward slipped the ball wide to Team who in turn cut the ball back to Ardallany. The Bankies defence were stretched and the goal opened up for the Vale midfielder but luckily he placed his side footed shot on the wrong side of the post by a matter of inches. McBride used his strength again only minutes later. This time he laid the ball off to McKinstry who in a similar side footed attempt went narrowly past the same post.

The Bankies home form has let them down this season, and with only 2 wins over 90 minutes in the last six it was starting to look like more vital home points were about to be dropped. However, the moment of relief finally arrived with only 8 minutes remaining. The Bankies retained possession, and the ball was pushed out to Mark Hailstones on the left wing. He floated a hopeful cross into the box, where McPherson did well to get in front of his marker and glance a header towards the back post. The ball came off the upright, and dropped just over the line before Hamilton desperately knocked it away. It looked like a tight call, but not to the assistant referee who instantly signalled that it was a goal. The ecstasy and relief were felt in equal measures as the Bankies players piled on top of McPherson.

The frustration for the Vale boiled over in the closing minutes as Chris Paul was given a second yellow card for a cynical challenge on Tommy Martin. One of the Tin Pail’s coaching staff was also given his marching orders for complaining too vehemently. Stevie Dallas had one further shot on goal before the Bankies held on to their lead comfortably until the final whistle.

The Bankies could certainly have done with an early goal to settle the nerves, as both the players and fans alike were starting to get very edgy the longer it took for the deadlock to be broken. At this stage of the season it is all about getting the job done, and the Bankies managed to do what was necessary. With news that nearest challengers Glenafton had lost, the significance of McPherson’s goal cannot be underestimated. The Bankies now face Shotts on Wednesday night in what will be a very difficult match considering the Lanarkshire men have lost only one of their last twelve matches.