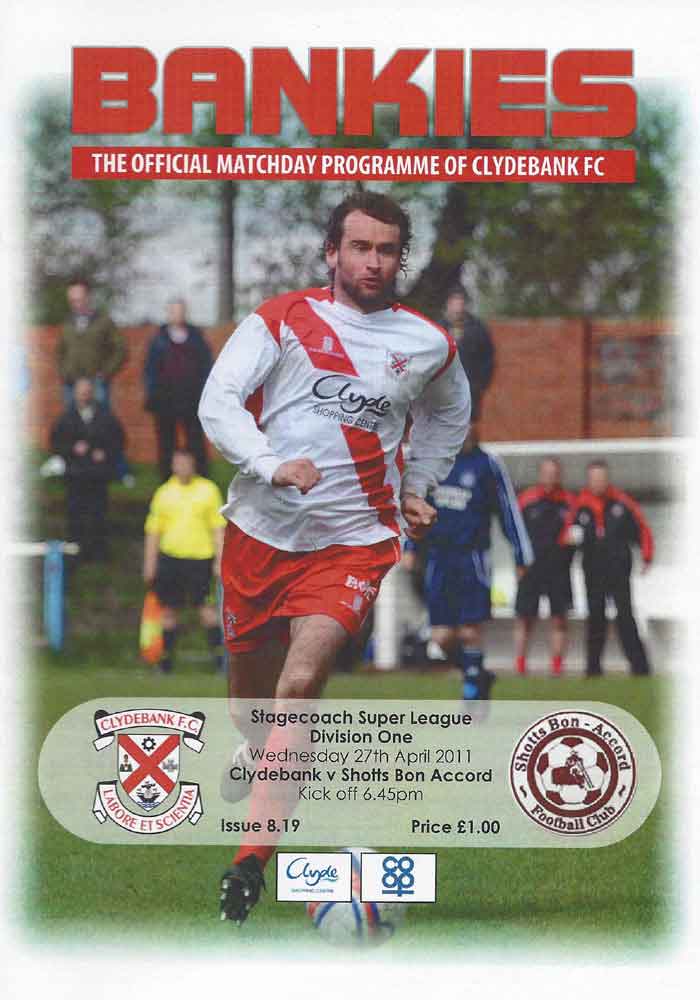 Darian MacKinnon treated himself to a hat trick to sink Shotts Bon Accord, as Clydebank recovered from a poor first half showing to romp home by four goals to one. The Bankies struggled to get their game together, and found themselves a goal behind after only three minutes, however two goals early in the second half changed everything. Stevie Dallas headed the equaliser, and within a minute Darian MacKinnon put the Bankies in front. MacKinnon increased the lead midway through the second half before completing his hat trick in stoppage time. With other challengers dropping points yet again the Bankies have now opened up an eight point lead at the top of the table.

The Bankies made two changes coming into this fixture with both strikers changed from Saturday’s match. Dallas replaced Stevie Dymock who had a slight knock and had to settle for a place on the bench, and Ross McPherson was given a start in favour of Charlie Hobbs after his winning goal against Vale of Clyde.

The match up against Shotts was always going to be seen as one of the most challenging of the season. Sectional League Cup winners and only one away defeat in the league all season showed that their credentials stacked up. It didn’t take the Bankies long to know that they meant business either. Within three minutes the Bon Accord were in front, and it was as basic a goal as you are likely to see. After winning a corner on the right hand side, the ball was floated towards the back post. Paul McLaughlin was completely unmarked and he steered his header into the net with the minimum of fuss to give the visitors the lead.

Due to traffic problems Shotts line up was still in doubt almost up to kick off time, but they certainly didn’t let that affect them. They almost increased their lead after eight minutes when an overhit free kick free from 45 yards had Stefan Gonet back pedalling, but luckily the ball hit the top of the bar and went over. Three minutes later and Shotts were a whisker away from making it two. McLaughlin beat Moffat to a high ball and Hanlon cracked it first time low to Stefan Gonet’s right hand side. With the keeper diving full length the ball shaved the outside of the post.

The Bankies looked anything but a top of the table side, and after 14 minutes Stefan Gonet made a wonderful save from a McLaughlin header. The big striker was causing all sorts of problems and his near post effort looked a goal all the way until Gonet came to the rescue.

After this fast start the Bankies slowly clawed their way into the match, but too many wayward crosses and passes were the order of the day. Ross McPherson finally had the first shot on target for the home side when his trundler was easily dealt with by Whelan. Shotts were becoming increasingly happy to sit back and allow the Bankies to come forward and break them down but they singularly failed to do so for the rest of the first half. A Murray header from a Paul Allum was about the only noteworthy opportunity.

It has been quite a while since the Bankies turned in such an inept first half performance, but we were about to see the cliché of a game of two halves become a reality. It only took four minutes for it to happen as well. In less than a minute into the half Burns should have been given a straight red card for tripping a goal bound Stevie Dallas on the edge of the box. Despite a defender closing in, Dallas was undoubtedly deprived of a goalscoring opportunity. From the free kick Mark Hailstones shot deflected through the wall and Hanlon did well to divert the ball for a corner kick.

From the kick Stevie Dallas was to get his shot on goal after all, when he bulleted Mark Hailstones cross in to the net at the near post to draw the sides level. Sixty seconds later and the game was turned on its head. Mark Hailstones supplied the ball into the box again, this time from a free kick. Darian MacKinnon back headed the ball through a melee of players, and Whelan who half came out from his goal line was caught in no mans land and could only watch as the ball nestled in the net.

Shotts were far from out of it, and just before the hour McLaughlin could have equalised. Taking advantage of some poor defending he lifted the ball over the advancing Gonet, however under pressure he could only strike the ball off the junction of the bar and post. Clydebank were now making in-roads into the Shotts defence, and McPherson almost surprised the keeper with a smart angled shot that was no more than a yard wide.

The third goal arrived midway through the half, and it was a delightful through ball from McPherson that set Darian MacKinnon on his way. The powerful midfielder outpaced Finnigan and calm as you like slipped it bast Whelan.

The Bankies then replaced the front two with Hobbs and Dymock, and with the Shotts defence looking visibly tired the chances became more frequent. Hobbs screwed a shot wide after a quick breakaway on 78 minutes. Then, a brilliant move started by Hobbs, saw MacKinnon show great vision to play in Paul Allum on the wing instead of two offside players. Allum crossed superbly, and a truly outstanding goal was prevented by Whelan who saved Hobbs’ shot with his legs.

Shotts continued to carry a threat, and Barker wasn’t too far away when he took advantage of a mis-hit free kick into the penalty box. He shifted the ball between his feet, and his shot was no more than a foot over the bar.

However, the Bankies looked like they could rack up a score as the game opened up. Dymock won the ball in the air after 86 minutes and Hobbs had a glimpse of the goal. He tried to shoot from a less than perfect angle and ended up going off target. A minute later and the duo linked up again this time Hobbs being the supplier. Dymock was close enough to see the whites of the goalkeeper’s eyes, but he drove the ball of the stopper’s legs when he should really have scored.

A fourth goal did come however, and it was a hat trick for Darian MacKinnon. He controlled Paul Allum’s throw in superbly and strode into the penalty box. With still some work to do he guided the ball into the far corner beyond Whelan. Incredibly MacKinnon’s treble was the first Clydebank player to achieve this feat since Mark Bowie did likewise on his debut at St Anthonys in September 2006. It has been a long wait.

After scraping past Vale of Clyde on Saturday and recovering from a poor start in this match the Bankies are certainly displaying the right ingredients to be championship contenders. With four games to go their destiny is in their own hands. Eight points ahead and with the clubs in third to eleventh place in the table not sure whether they are fighting promotion or relegation the signs are looking more promising for the Bankies. Next up The Bankies travel to relegated Annbank on Saturday where the record is not great. Three points here will see the club take another massive step towards the premier league.