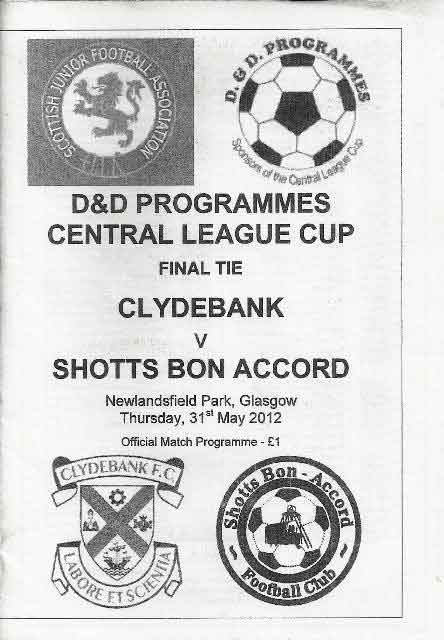 Clydebank’s wonderful winning streak was rewarded on Thursday Evening when the club won the Central League Cup for the second time in three seasons. A quite amazing run saw the Bankies claim their thirteenth win in a row by disposing of a Shotts side by three goals to nil who looked decidedly leg weary due to their massive fixture pile up. However, they can console themselves with their superb Scottish Junior Cup victory the weekend before.

The Bankies are no stranger to fixture pile-ups themselves in recent seasons. An interesting statistic is that Shotts played 12 matches in the month of May, whilst the Bankies played 13 in the same month in 2010 en route to winning the Central League Cup against Ashfield. Huge fixture backlogs undoubtedly wear you down eventually and it is a great testimony to Shotts that they have managed to keep their impressive form going for so long. Unfortunately for them, not only did they meet a Bankies side who were fresh, but also on top form and with a hunger for victory not seen in many a season.

Budgie McGhie’s instructions were explicit. To start the game at a high tempo, and to really test the energy levels of the opposition, and the players didn’t disappoint. They came flying out of the traps and immediately put Shotts under severe pressure. Shots rained in on the Accord goal. Twice Wilson went wide, and had another deflected for a corner. Brown stopped magnificently from Tommy Martin and another desperate block prevented a goal. A goal seemed inevitable and when a half-hearted clearance fell to Gordon Moffat at the edge of the box, he lashed it into the net with help of a deflection. This was the start the Bankies wanted, and the test was to see if Shotts could raise their game one more time.

Shotts certainly did make a game of it after the initial onslaught, with the rest of the first half being fairly even. They could and probably should have equalised when MacKenzie was sent clear on the left-hand side. Hamilton blocked his shot superbly and McInnes cleared the ball as it continued to spin toward goal. From the resulting corner Watson headed over from close range when it looked easier to score. Those scare aside the Bankies defended well and always looked dangerous at the other end. Brown superbly stopped a Wilson free kick whilst MacKinnon saw a fine effort go about a foot over the bar.

Towards the end of the half Berry was unlucky not to have a penalty given after being upended in the box following a run that Messi would have been proud of. There was also a flash point when Wharton deliberately charged into MacKinnon off the ball. Wharton was lucky to escape with a yellow card whilst MacKinnon was curiously booked for being the victim in the piece. MacKinnon though was fortunate to stay on the field after returning the favour only minutes later with the ref deeming a stern talking to as enough punishment.

The Bankies upped the pace at the start of the second half as they realised that a second goal may well finish off Shotts. Twice in the opening minutes, headers flashed wide of the goal with Moffat and Campbell being the culprits. The goal was only staved off temporarily though, and it came after 54 minutes from a corner kick. In an old-fashioned Arthur Montford stramash in the six-yard box, Martin McInnes was first to react as he leathered the ball into the net from close range.

Most people sensed the game was up, and Bell should have tied it up when he hit the post from close range only five minutes later. Shotts made a couple of substitutions and briefly rallied. Fleming had a trio of shots at goal with one in particular that brought out a fine save from Hamilton. It didn’t last long as the Bankies then made changes to re-establish their dominance. MacKinnon and McPherson both passed up decent chances in the chase for the third goal, which came with ten minutes remaining.

Darian MacKinnon showed superb pace and strength to get past Williamson, and as the Bankies front man was about to pull the trigger, he was chopped down the Ex-East Kilbride player. The ref made two correct decisions: penalty kick and a straight red card for Williamson. Adam Strachan calmly stroked the ball into the net from the spot to seal the cup for the Bankies. It could have been worse for Shotts in the end up with several more chances spurned before the final whistle, but the match ended at three goals to nil.

Shotts have had an amazing year by any club’s standards, and can still achieve more before their season ends so they won’t be overly disappointed with the outcome of this match. The Bankies thoroughly deserved this victory and their remarkable form since the turn of the year was rewarded with some silverware, and it ends the season on a real high note. There is still the matter of the Evening Times Cup Winners Cup to be played. A tournament the Bankies have not won a match in previous seasons. Something they will be keen to rectify.