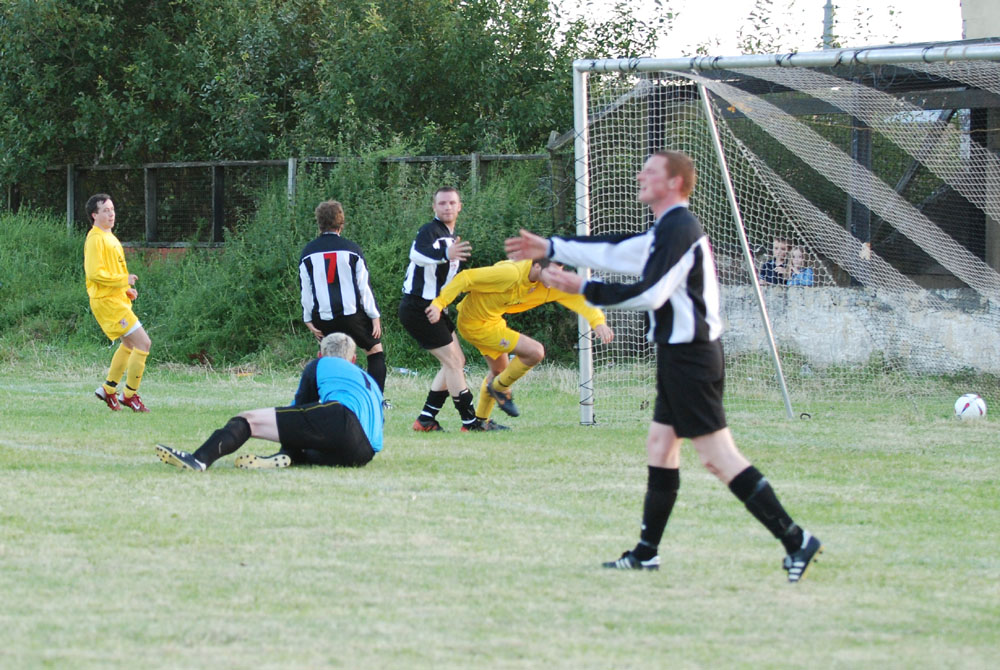 Clydebank earned their first victory at Keppoch Park with a disciplined display against Glasgow Perthshire. An incident packed match saw goals from debutants Carr and Craig, two penalty misses and an ordering off.

Clydebank received a boost heading into this match with Ged Hoey penning a new deal with the club and Lee Sichi's signing being completed. On a less positive note, keeper Chris Prior was a late call off with a trialist keeper being drafted in at the last minute. Captain, Gordon Lappin also returned and found himself in unfamiliar territory, beside Cunningham at the heart of the defence.

The Bankies were quick out of the traps and took the lead within four minutes with a quite stunning goal. John Cunningham twice won high balls in the penalty area, and his persistence paid off when the ball dropped to David Carr with his back to goal. The striker lashed an unstoppable overhead kick into the net with the keeper rooted to the spot.

Perthshire were up for the game and their combative tackles would be a feature of the game, however the Bankies midfield was more than a match for this physical style.

Clydebank had chances with a Lennox Header and a Jack free kick before Perthshire had their first real chance, a long range effort that was well wide.

Clydebank were dictating play and Andy Kenna came close with a shot after some trickery from Carr. Minutes later the ref waved away penalty claims when Craig who found himself through on goal, was clearly brought down as he tried to round the keeper. The big man got back on his feet and the ref played advantage, however the ball had ran too far wide for any real positive chance to arise from the situation, much to the annoyance of the large travelling support

From this chance the Bankies ran up the park and made it 2-0. Andy Kenna found himself in space 20 yards from goal and his deft chip shot evaded the keeper who could only touch it into the net. The Bankies were in control now, and goal number three should have been on the cards as the Bankies were awarded a penalty. A great sequence of play which started with the keeper making a great stop from a Carr shot, ended with Sichi picking up the ball on the left hand side, and being downed by a defender as he tried to hit the bye-line. Paul Craig stepped up, but his low shot into the corner was well saved by the keeper.

Perthshire came out in the second half knowing they needed an early goal to get back into the match, but the Bankies defence contained them without too much trouble. However, it was Clydebank who were making the opportunities. David Carr was having a man of the match performance and another piece of skill on the left hand side saw the striker get to the goal line and cut the ball back to Hoey who could only screw his shot wide from close range.

The third goal finally came with a great move started by Andy Kenna. His ball out wide to Ged Hoey was whipped in, low across the box between defenders and keeper, and stretching his long leg to stab the ball home was Paul Craig. The striker enjoying every minute of the strike.

With the game all but won, Craig and Sichi were replaced by Craig and Kennedy. not long after the Bankies were awarded a second penalty. This time a Hailstones goalbound shot was handled by a Perthshire defender. Gordon Lappin came forward to take the kick, however the Bankies wretched form from the spot continued as his shot to the keeper's right was hit at a good height for the stopper and he confidently saved it.

Perthshire had several players booked during the match, and with the third goal went the discipline. It came as no surprise as the ref produced a red card to the number 8 who had persistently gave away fouls all night, this time for a bad challenge on Ged Hoey.

As the match came to a close Docherty came on for Jack, and two further opportunities from Hailstones and Hoey failed to trouble the keeper.

A comprehensive victory, that could have been more if it wasn't for some poor penalty kicks. Budgie McGhie must be concerned at his players inability to score from 12 yards, after last season's shoot out exploits and the 0 for 3 statistic this term. However, that aside a clinical display with the new signings giving the away support a lot to be excited about for the coming season