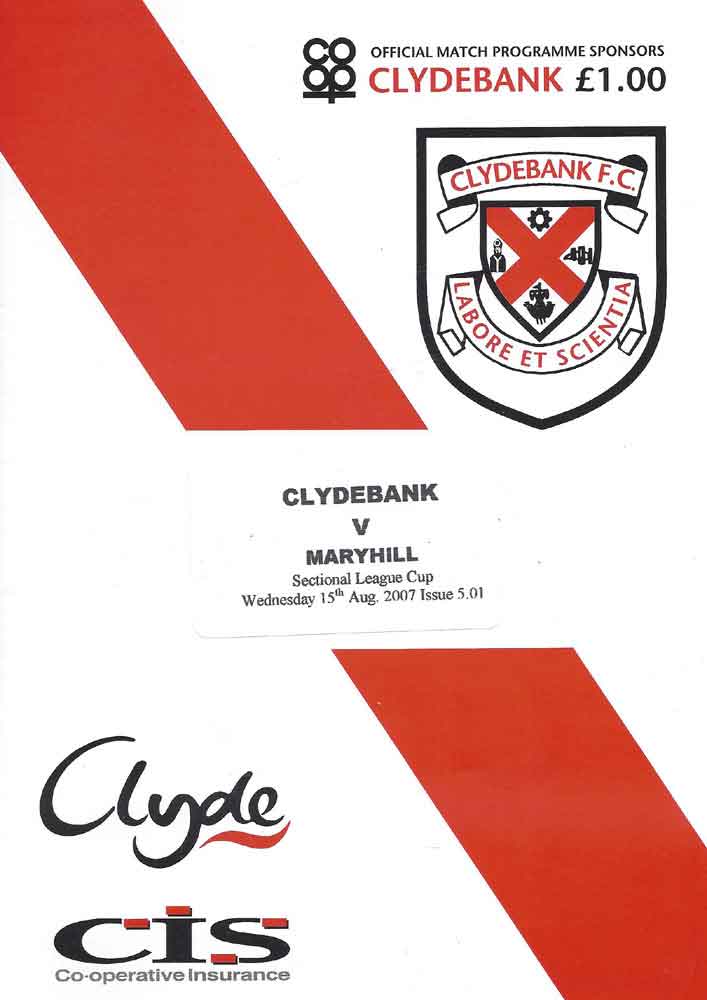 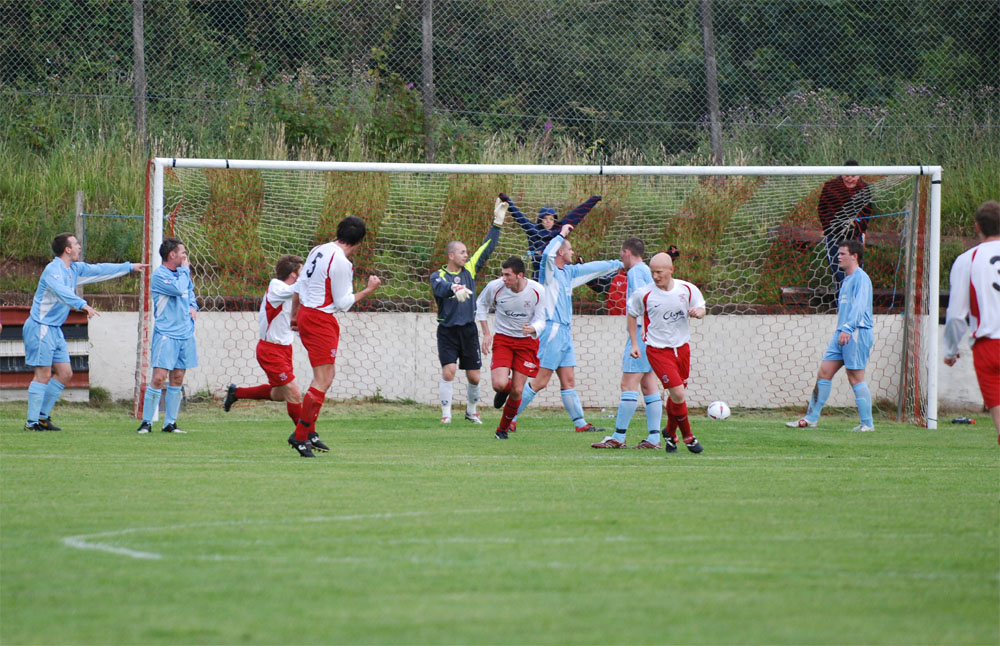 A combination of missed chances and defensive mistakes saw Maryhill snatch a last minute draw at Glenhead Park, in a match that Clydebank should have put to bed long before then.

Clydebank kept virtually the same side that defeated Cambuslang on Saturday. Home debuts were given to Lennox, Sichi and Craig with Chris Prior continuing in goals for the injured Stefan Gonet.

The first game of the season at Glenhead began in horrendous circumstances as the Bankies found themselves a goal down within 10 seconds. Straight from kick off, Maryhill lofted a high ball into the penalty box, which Docherty failed to clear properly. The ball was chipped back into the box at waist height from the left hand side for what should have been an elementary catch for Prior. The keeper, in a dreadful gaffe, spilled the ball into the path of the waiting Johnston, who couldn't believe his luck, and the striker made no mistake from 6 yards.

Bankies set about trying to retrieve the situation and within the opening ten minutes had three decent scoring opportunities. From a Hailstones corner to the back post, Paul Craig found himself in space and his header back across goal was narrowly missed by Sichi. Alan Jack saw a 35 yard free kick deflected for a corner, and the best chance fell to Lee Sichi. Hailstones made light work of the defender on the left wing, and swung in a deep cross to the back post. Unfortunately, Sichi could only divert his header over the bar.

Both teams had shouts for penalties in quick succession. Lappin appeared to be upended in the box, but the ref was having none of it, then Maryhill had a claim for handball which would have been a harsh decision if it was given.

Possession wise the opening half hour was relatively even, however the Bankies were showing more of a penetrating edge. Alan Jack had another attempt held by the keeper, before Maryhill had their first real shot since opening the scoring; a drive from 20 yards that was well over the bar.

The Bankies finally got the reward for their endeavours, when a low free kick was missed by everyone. A half hearted clearance was met from 20 yards by John Cunningham first time. His shot went through a ruck of players, where Paul Craig was in great position to deflect the ball into the net from close range.

The game threatened to boil over at this point, mainly due to some strange decisions from the ref. Three players found their way into the ref's book in the closing minutes of the half, including Bankies goalscorer, Craig.

The Bankies made two half time changes with Carr and Fisher replacing Craig and Sichi, and began the second half in determined fashion.

Within a minute, the Maryhill keeper was forced into a great save from an Alan Jack free kick. Jack tried his luck yet again from another free kick, but this time ballooned his effort over the bar. Then, a cute ball rolled into the box was cleverly dummied by Andy Kenna, but Fisher had checked his run at the last minute. The pressure was mounting and Hailstones missed a great opportunity with a scissors kick volley, after great interplay with Carr and McInnes.

The goal finally came with the best move of the game. A sequence of passing on the right flank, saw hailstones get beyond the Maryhill defence and his low ball in was met first time by Gordon Lappin, whose perfectly placed shot nestled into the corner of the net beyond the despairing dive of Montgomery.

The Bankies should have killed the game after this with chances galore coming their way. Fantastic wing play from Carr ended with a McInnes shot being blocked. Then, controversially, the ref over-ruled the linesman's offside flag allowing Fisher a clear run in on goal. Rather than taking it on himself, he elected to play in Hailstones, but he couldn't put the ball away. Two more chances arrived quickly. Firstly, Hailstones and Carr linked up well on the right wing, with the latter playing his cross in perfectly only for Fisher to miss with a header. Then, Carr who was tormenting the 'Hill defence, got by his man again setting up Hailstones, but the striker sent his volley wide of the post.

With 15 minutes remaining Maryhill sensed they were still in the game, and began throwing men forward. They earned a corner which was whipped in at the near post. Mark Hailstones nearly done what he couldn't do at the other end, by steering a header towards his own goal. Luckily, the ball was deflected over for another corner. This was a warning that the Bankies would fail to heed.

Despite still having opportunities to score and finish off the game, it was Maryhill who would snatch a late goal. After a scare, when a back post volley hit the inside of the post, the Bankies paid for their earlier misses. Barry Docherty seemed to get caught in two minds with a clearance, hittng it awkwardly with his thigh. The ball bounced perfectly for the Maryhill winger to fire it hard into the box from the right hand side. Bodies flew everywhere in attempt to connect with the ball, and unfortunately the ball hit off of the inward running James Lennox and crossed the line. There was still time for sub Derek Kennedy to try and hook a shot towards goal, but the ref blew for time up at two apiece.

The Bankies paid the price for missed chances tonight. a one goal lead is always dangerous, and so it proved to be. However, there is much to be positive about. Apart from minute 1 and 90, it was a strong team perfomance. We have looked fitter than every side we have come up against so far and the new signings look like they can take us to a new level. We need fear no one.