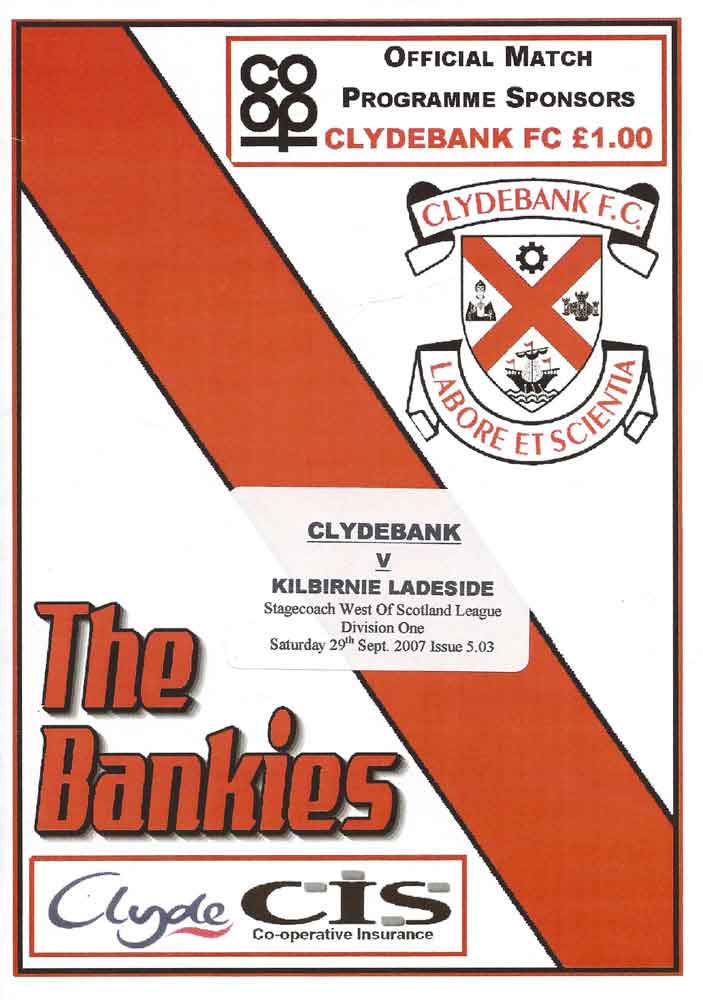 Two stunning Alan Jack goals and a Mark Hailstones thunderbolt gave the Bankies all three points in their first ever home game in the Super League. However, the scoreline tells a different story from the actual match as Kilbirnie's performance belied their bottom of the table position.

With several players missing including the influential figures of Cunningham and Lappin, the Bankies were forced to re-jig the side considerably. Gonet and Soutar came in for their first starts of the season. Mark Hailstones earned a start after his confidence building display at Ashington and Scott Friel made his debut after leaving Albion Rovers.

The Bankies took the lead with the first real chance of the Match. Mark Hailstones, who would go on to have his best performance of the season, stepped inside from the left wing and cracked a low shot into the bottom hand corner giving Ward no chance.

Anyone expecting an avalanche against the league's bottom markers were about to be disappointed as Kilbirnie didn't come to Glenhead to make up the numbers, and soon began to put the homesters on the back foot

After 11 minutes, Fisher had to be lively to nod a goalbound header off the line. Then, Gonet who would be a hero with several important stops, came to the rescue by blocking a shot from Anderson.

Cunningham's commanding prescence was being sorely missed as another free header from a corner was headed wide by Grey. Gonet then had the save of match as he brilliantly touched a Longworth header over the top.

With 20 minutes gone, Gonet was forced to into another blocking stop from Kinney and Longworth sent a diving header just past only a minute later. The Bankies goal could not survive the pressure and after 24 minutes the Blasties were deservedly on terms, as Kinney neatly volleyed in from eight yards.

Kilbirnie continued to look for more goals as Longworth had a header and then a shot on the turn both held easily by Gonet. However, the Bankies were to regain the lead after 34 minutes much to the dismay of Kilbirnie

Clydebank earned a free kick around 20 yards out, but practically on the right hand side throw-in line. Alan Jack, curled in a low cross that was just beyond Andy Kenna. The ball continued untouched and found the keeper's right hand corner who couldn't reach despite a despairing dive.

This knocked the wind out of Ladeside's sails and the Bankies finished the half strongly. Andy Kenna saw a drive go over after great play by Craig and Lennox and then Kilbirnie received a proverbial kick in the teeth as the Bankies increased their lead

Alan Jack picked up the ball just inside Kilbirnie's half and from the edge of the center circle sent a perfect lob over Ward's head and into the net. It was a stunning effort from one of the few players in the Junior game capable of such audacious skill.

Clydebank, unbelievably took a 3-1 lead into the second period, and were determined to keep the scoreline that way. A much improved performance was to follow and Fisher was to show this intent in the opening minute by by sending a first time shot over the bar after a fine knock down by Craig.

Hailstones had a great chance to finish it when Friel lofted the ball beyond the Ladeside defence. The Bankies striker beat the keeper to the ball, but slipped at the vital moment and Ward was able to recover.

McGhie made two quickfire changes with Allum replacing Lennox and Carr coming on for Hailstones a few minutes later which was met with some boos from the crowd.

As the game entered the last quarter the Bankies were in control. Kilbirnie did not have the same incisiveness as they had in the first period and could only muster a couple of long range efforts. Clydebank looked dangerous on the break as Hoey spurned a great opportunity from 25 yards after great work by Carr.

The Blasties did manage to pull a goal back however, and a fine effort it was too. Four first time passes saw the ball laid off to Longworth who sent an unstoppable shot past Gonet from 10 yards.

With twenty minutes still remaining, Kilbirnie went all out for a point. Substitute, Davidson fired in an angled drive only a minute later that Gonet did well to parry away.

However, the Bankies were still creating chances too. Carr had two long range shots, one which was nearly fumbled into his own net by Ward. Then Craig had a golden opportunity to seal the points

A long ball over the top saw Rosenthal give Craig a dunt in the back. The defender was handed a second yellow card and ordered from the field. It could easily have been a straight red as Craig was denied a clear scoring opportunity. Craig took the free kick himself, which was centre of the goal and on the 18 yard line. Unfortunately, he shot tamely at the wall and Alan Jack shot well over from the rebound.

Budgie mcGhie brought on Duncan for Craig in the closing stages as the Bankies tried to use his pace to exploit the spaces left by Kilbirnie as they came forward in search of an equaliser.

This seemed to be an effective tactic as Carr saw a shot deflected for a corner, then Hoey sent a shot well wide, and then came a controversial penalty incident. From a breakaway, Fisher found himself one on one with Ward. As he cut inside and tried to skip over the keeper, he appeared to be brought down. The ref blew his whistle and the Glenhead crowd cheered as it seemed the inevitable spot kick had been given. It seemed inconceivable that Fisher would dive given that he had done the hard work and would have had a simple tap in. Unbelievably though, the ref awarded Kilbirnie a free kick and booked Fisher for diving.

Fisher was involved in another penalty claim two minutes later at the other end of the pitch. the ball bounced up and clearly struck him on the arm. The decision was given, but you could hear the collective sigh of relief from the home crowd as the ref pointed just outside the box.

With only five minutes remaining, Jimmy Duncan suffered a serious injury, and play was held up for several minutes as the young winger was strretched from the field. As the Bankies had used all three subs, the sides were level again at ten men each

The Blasties sensed this was their chance and piled forward as the clydebank defence fell back deeper and deeper. Longworth and Anderson passed up decent chances, however gaps were opening up and Hoey exploited this and send Carr free on the right hand side. The striker should have ended the match, but he sent his shot wide of the post

Ladeside should have got their equaliser in the third minute of injury time. A cross ball evaded Hoey and he fell over leaving a striker free only a few yards out, but he blew it with a mixture of hesitation and poor finishing and the chance was gone, as was time and the Bankies held on to win 3-2.

Nobody expected Kilbinie to be pushovers and they proved to be anything but as they played with great flair. Easily the best side the Bankies have faced this season, Budgie McGhie will be pleased his side have prevailed. This was a hugely entertaining game of football and with vital players missing another test has been passed and the fans can look to next weeks cup game happy at still being unbeaten in the league.