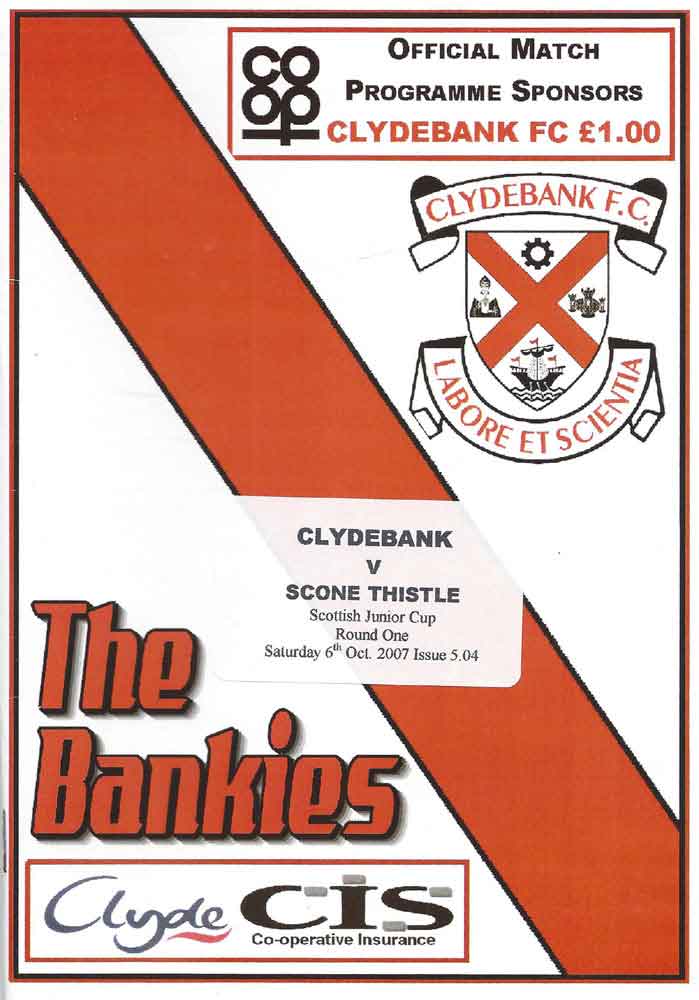 Clydebank eased past Scone Thistle in a high scoring match to secure a spot in the second round of the Scottish Cup. Despite a mini revival from Scone that threatened to turn into a fully fledged comeback, the ten men Bankies came through comfortably in the end.

The Bankies were again hindered with suspensions, injuries and holidays as Lappin, Bowie, Sichi, wilson and Docherty were all posted missing, however good news came in the shape of Paul Allum, who was back in the starting eleven

Two goals in the opening five minutes gave the Bankies a dream start, and gave Scone a mountain to climb. Alan Jack opened the scoring in the first minute with a forty yard effort. Although the ball swerved significantly as it headed goalward, goalkeeper Anderson who was poorly positioned, should really have saved it. After five minutes David Fisher made it two with a brave diving header from a Paul Allum cross.

Only minutes later Thistle thought they had reduced the deficit when the imposing figure of Simpson powered a header in from close range, however the linesman adjudged the defender to be offside. The Scone players were enraged as the decision was marginal at best.

Clydebank came forward in search of the killer third, and Andy Kenna came close when Alan Jack found the midfield dynamo in the six yard box with a free kick. Unfortunately, he was off balance as he shot and the ball deflected off a defender for a corner.

Scone were still in the game, and Simpson made a nuisance of himself again in the box. The ball fell to Jack and his shot was blocked, only for Anderson to send his follow up only inches past the post.

The Bankies created a series of opportunities leading up to the half hour. A long ball over the top saw Hailstones try to prod the ball past Anderson, but the keeper did well to save with his legs. Then a quick throw in to Fisher, saw the winger fire in a shot that was blocked. Hailstones, again showed smart skills to shoot first time on the turn only to see the keeper retrieve the ball at the second attempt.

The goal that was coming duly arrived after 34 minutes. Hoey put Carr through one on one with Anderson, however the striker hit the ball too far in front of himself and allowed the keeper to block. Thistle's pitiful attempt to clear saw the ball land kindly to Hailstones who struck sweetly into the corner from twenty yards.

Number four followed minutes later when Fisher showed great strength in the box to reach the bye-line. He calmly looked up and slid the ball to the incoming Andy Kenna who gleefully buried the ball into the net to give the Bankies a commanding half time lead. The only sour note of the half was Alan Jack having to retire early due to injury.

Hailstones was in the mood to add to the scoreline as the second period got underway. A defence splitting pass from Lennox, saw the forward strike an angled drive just past, then a minute later he saw a 25 yards effort go wide.

After 51 minutes Andy Kenna sent a header over from Carr. This was his last action as he was replaced with colin Sutherland, as the manager seemed to have his eye on next weeks game. On the hour, the Bankies added a fifth when Fisher fed the ball through cleverly to Davie Carr. The Keeper was out sharply and managed to tackle the striker. Unfortunately for him, the ball broke to Hailstones who had the simple task of tapping into the empty net.

This was the cue for the Clydebank team to collectively fall asleep, as Gardner headed what seemed like a consolation goal into the net off of Gonet's left hand post.

Remarkably, this sparked the visitors into life. Craig replaced Friel and the positional changes seemed to unsettle the Bankies as Scone began to dominate. A quick throw in gave Caldow a clear shot on goal from the edge of the box. Gonet saved his low shot well, but Gardner should have scored his second from the rebound as he had the whole goal to aim for. Somehow, he contrived to hit the ball at Gonet who again did well to block with his feet

Gardner did get his second however, as he nodded home a far post cross to cut the deficit to three. The comeback looked on, as Sutherland foolishly gave away a penalty by pulling down Cameron in the box with quarter of an hour left. The spot kick, unusually, was to be taken by Anderson, Scone's keeper. He smashed the ball as hard as he could and it rattled off the crossbar. He finished off the rebound clinically, but the goal was chopped off as the keeper touched the ball a second time in succession.

Scone were to pay for this miss as a minute later Paul Allum, who looked sharp all day, played a precise pass across the six yard box which Paul Craig netted from close range.

The action wasn't finished as Sinky Soutar received a straight red card for a reckless challenge on the right wing. On another day the ref may well have only given a yellow card, however, with the Bankies four goals to the good it was a crazy challenge to make

Budgie mcGhie will be pleased with the first hour of this match, but disappointed with the last third. Had Scone scored their penalty it could have been a nervous ending. However, the score is all that matters in cup games and the Bankies are in the hat for the next round.