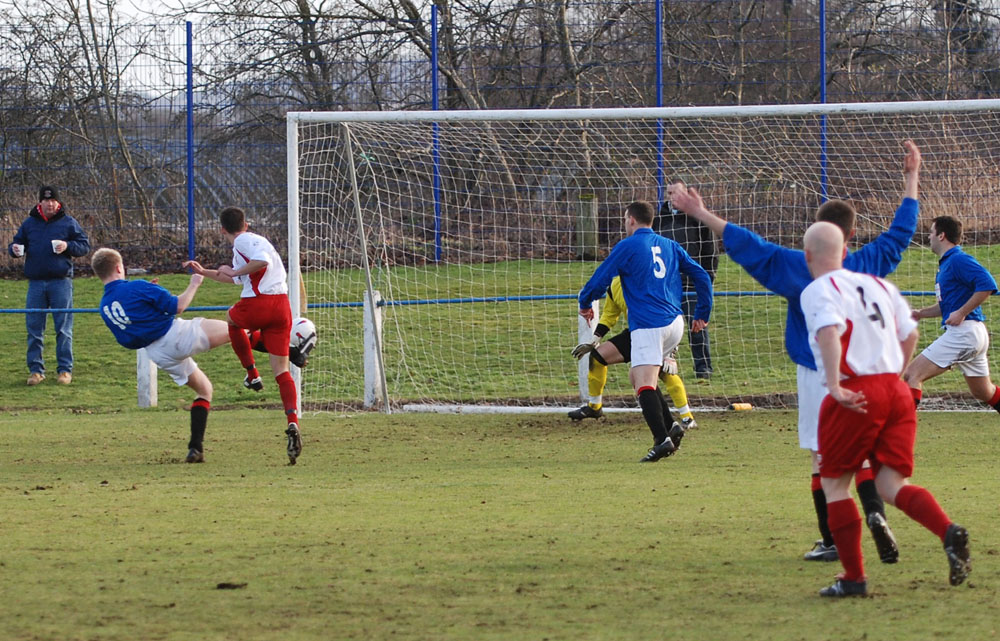 Clydebank booked their place in the fifth round of the Scottish Cup today in a five goal thriller that was decided with a quite stunning injury time winner from Mark Hailstones.

With a five week weather enforced lay off, Budgie McGhie was looking for his side to quickly blow off the cobwebs against a Blairgowrie side that are unbeaten at home in the league and have been in great form all season.

And that is exactly what he got, as Mark Bowie fired the Bankies into the lead after only two minutes. A fantastic tackle from recent signing Brian Miller on the right hand side of the pitch found Bowie on the edge of the penalty area. The in form striker skipped past one defender, and deftly touched the ball past another before slamming the ball home with his left foot from ten yards.

The Bankies threatened to over run the home side in the early stages, as Mark Bowie burst through again after 5 minutes. This time, a moments indecisiveness cost the front man a second goal.

Minutes later, Clydebank earned the first of many corners in the match. Hailstones flighted a deep ball over that found Paul Craig unmarked at the back post, but his header was poor and was cleared for another corner

Blairgowrie didn't learn their lesson as another back post corner after nine minutes came to the unmarked Paul craig, however the big striker was stretching and skied the ball over the top

The match began to settle down, and Blairgowrie had their first real opportunity after 19 minutes, when a short headed clearance from Lennox fell to the No8 25yards out, however he blasted his shot well over the top.

Midway through the half both sides had a goal chopped off. Firstly, John Cunningham was harshly adjudged to have fouled the keeper after heading home a Hailstones free kick, however the big defender did not complain against the decision. Down at the other end there was a much more contentious decision as the Bankies failure to clear a cross ball allowed the homesters Neave to crack the ball into the corner of the net. The gesturing to the away support was brought to an abrupt end as the linesman had his flag up for a less than obvious offside.

Just before the half hour mark, Paul Craig made a great run down the left flank that committed the Blairgowrie keeper. The ball finally made it's way to Lennox whose 25 yard strike was superbly turned round the post by the keeper who had managed to recover his position between the sticks.

Lennox had another shot go wide after 32 minutes, and shortly after Bowie brought out a fine stop from the home keeper with a snapshot from 25 yards, as the Bankies kept up the pressure. Blairgowrie had their best spell prior to the interval, but still hadn't created a chance of note. In fact, it was Lennox again who shot over after good work by Allum and Bowie.

Clydebank were to rue not killing the game off in the first period as Blairgowrie equalised within two minutes of the restart. A deep cross from Neave was just a little too high for McInnes, and the slightest touch he did make played the ball into the path of Farquharson who nodded past Corr from close range.

It was a diffrent game now, as suddenly the roles were reversed. On the 50 minute mark, the dangerous Neave hit the byeline and only a great diving stop by Corr stopped the crossball from giving an incoming striker an easy tap in.

Sensing the danger, Budgie McGhie immediately made two changes, bringing on Club captain Gordon Lappin and midfield maestro Alan Jack for Lennox and Miller. This decision immediately paid dividends as the Bankies regained the lead after 59 minutes. Martin McInnes started off a great move on the left wing, and Paul Craig raced clear of the defence. He slid the ball across the six yard box where Gordon Lappin had the simplest task to tap into the empty net.

The lead lasted only two minutes as disaster struck in multiple fashion. The no8 for Blairgowrie crashed a header off the crossbar, that rebounded off Corr's back. In the ensuing stramash the ref awarded a penalty kick as Cunningham was alleged to have handled the ball on the line preventing a goal. The big centre received his marching orders for his troubles, and to make matters worse as Ireland stroked the ball home to make it all square again.

Blairgowrie must have fancied their chances now, however the home side still struggled to create any real chances as the ten man Bankies were steadfast in defence. Budgie McGhie obviously felt this tie was still winnable as he kept his attacking formation intact and continued to play with three at the back.

This was borne out as the visitors were still creating the better chances, as a decent penalty shout was turned down after a defender charged down an Allum cross with raised hands. Then, Allum sent a long range drive over the top after the home defence backed away from him.

With 15 minutes remaining Paul Craig earned himself a booking, even though he appeared to be the victim of an off the ball push. This booking would prove disastrous for the big striker as he was sent to the stand with only 5 minutes remaining, for a silly trip.

Blairgowrie piled forward as they sensed victory with the visitors down to 9 men. In a moment reminiscent of the Bankies last minute loss to Troon earlier in the season, Blairgowrie got their chance in the dying minutes. The No 12 raced clear on the left hand side with only Corr to beat. He chipped the keeper beautifully and it looked a certain goal all the way, but it crept wide by what could only have been millimetres to the relief of the large Bankies support.

In a most incredible ending the Bankies earned a free kick on the left wing that was flighted in by Gordon Lappin. Mark Hailstones connected with an outstanding acrobatic overhead kick that sailed into the net far beyond the keeper. This cued an ecstatic response both on and off the pitch as the Bankies played out the remaining moments of the 6 minutes of injury time to record a highly memorable victory.

A cracking cup tie, that even Blairgowrie fans must have enjoyed (apart from the last minute), with the Bankies just deserving the victory overall. Considering the lengthy lay off the players worked their socks off and got their reward in the end. Without doubt, one of the most exciting games since the club's return to the Juniors and a response from the stands that only comes along once in a while. The smiles on the faces of each and every Bankies fan said it all.