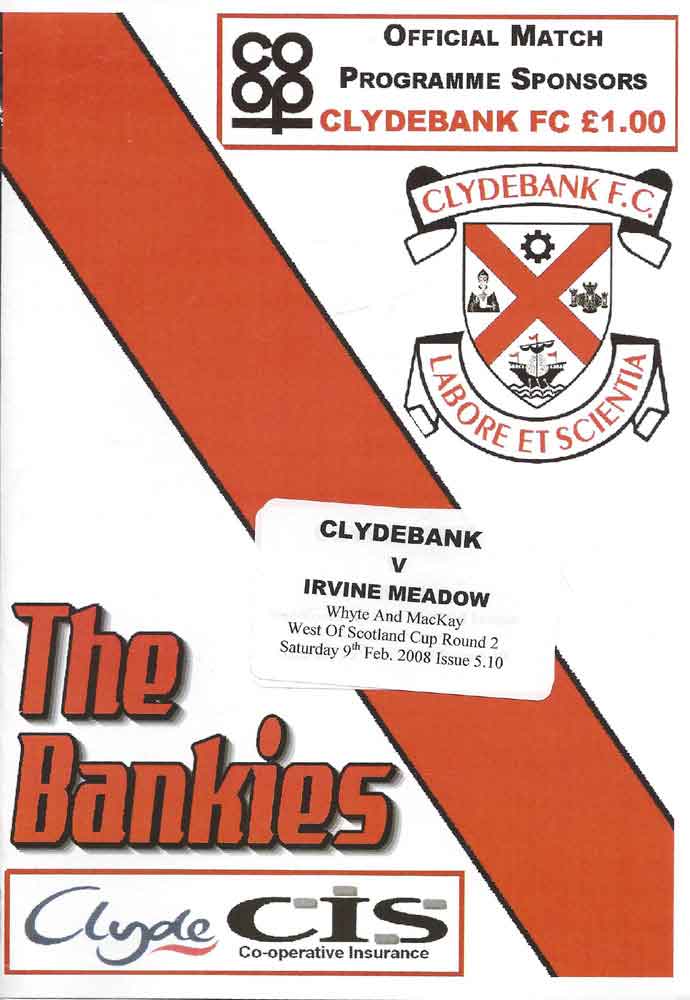 Clydebank claimed their biggest scalp to date by knocking out Super Premier League leaders Irvine Meadow in a frantic West of Scotland Cup Second Round Tie. A result that did not seem likely with the Bankies seeing competitive action only once in the past eight weeks.

There were a few raised eyebrows as Sinky Soutar made a rare start in place of midfield stalwart Andy Kenna who only found a place on a strong bench that included Alan Jack and Davie Fisher who is returning from injury.

Big spending Meadow are packed with ex-seniors in their squad, and it was ex Queen of the South striker Emilio Jaconelli who missed a sitter after only 2 minutes. A flighted free kick from the left was deflected into his path, but he volleyed wide from only a few yards out with the goal at his mercy.

The Bankies were looking a little nervous early on, but still managed to force a couple of corner kicks, with Soutar wasting an opportunity by mis-controlling the ball.

Medda continued to force the pace, as Crilly had a free kick deflected over the top after Mark Hailstones gave away a silly foul. Hilland delivered the resultant corner like a missile and Corr superbly turned the ball over the bar. After 18 minutes Strain turned inside from the left but his long range effort was easily saved by Corr.

A minute later, Gordon Lappin delivered a deep corner kick that was met by Paul Craig at the back post, however the big stiker could not direct his header on target.

Confidence was starting to grow in the home side, and the ever impressive Mark Bowie showed great tenacity by dispossessing Hilland on the edge of the box. The Bankies front man slid the ball across to Soutar, but his strike did not have enough power to trouble Wardrope in the Meadow goal.

It was a real blood and thunder clash now as both teams battled for superiority. Jaconelli shot weakly past after half an hour after the ball spun through to him fortuitously.Two minutes later and the Bankies took the lead. Gordon Lappin whipped in a vicious free kick from the left flank, and Paul Craig stole in at the near post to volley the ball goalbound. Wardrope made a real hash of his save and pushed the ball in to the net to give the striker his 10th goal of the season.

Meadow tried to step up a gear, but were matched at every turn by the buoyant Bankies. Hamilton saw a header go over the top after being well marshalled by John Cunningham.

Clydebank were making great use of the breakaway, and Lennox fed the ball to Bowie whose dangerous cross forced McLaughlin to clear over his own bar. From the corner Cunningham's hook shot was well held by Wardrope.

After 40 minutes Jaconelli missed his second sitter of the day. He was put clean though, although he looked decidedly offside,one on one with Corr, however the Bankies stopper saved superbly as Jaconelli tried to slide the ball past him.

Paul Craig had a great chance to double the Bankies lead just before the break, after Wardrope's poor clearance landed straight at his feet. With the crowd shouting from him to lob the keeper from 45 yards, he elcted to drive forward, and blast the ball from 25 yards, however the Meadow keeper had regained his position just in time to save the ball.

Jaconelli was not to be denied and he finally found his mark on the stroke of half time. Great play on the right wing by Turner, saw the wide man deliver a perfect cross that Jaconelli headed into the net from Close range giving Corr no chance.

Both sides came out with all guns blazing at the start of the second half. McGinty had an attempt for the visitors and Paul Craig replied with a 25 yarder that didn't overly concern Wardrope. The best chance came to Hilland whose low drive forced Corr into a last minute save to concede a corner.

It was a real end to end encounter, and after 54 minutes Craig nodded the ball through to Lappin. Wardrope was quick off his line, and the ball spun out to Bowie, however he hurried his shot from 25 yards and it cleared the bar by several feet.

Strain brought out another fine save from Corr on 57 minutes, however it was the Bankies who were to get their nose in front a minute later. Paul Craig controlled the ball in the middle of the park and hooked it wide to Mark Bowie. The front man curled in a first time cross, that was crashed in by Gordon Lappin leaving the keeper with no chance.

The Bankies lack of games was starting to show as one or two players were starting to wilt as Miller replaced Craig, and Meadow began to put the home side under pressure. It was no surprise that the lead only lasted five minutes. THe Bankies defence failed to clear the ball despite having many oportunities to do so, and Turner took full advantage by nicely controlling a cross ball and slotting it past the stranded Corr.

Meadow would have been most people favourites now, but incredibly the home players summoned up the strength to take the lead for the third time. Last man Wingate was too casual, and was promptly dispossessed by Brian Miller. He bore down on goal and calmly slipped the ball under Wardrope to make it 3-2.

With eleven minutes left the Bankies suffered a serious blow as John Cunningham landed awkwardly on his ankle and had to helped from the field. This moment may have severe repercussions for the rest of the season as the big centre has been outstanding.

Meadow really began to turn the screw in search of a late equaliser, however the Bankies should have finished the game after 82 minutes when Miller put Bowie straight through on goal. Similar to Jacconelli's first half miss, Bowie's side footed effort was well saved by Wardrope.

Three minutes later and the Bankies were 3 on 2 but the passing was not incisive enough and Jack was forced to shoot early and his effort was blocked.

Time seemed to last forever, as the last few minutes involved several desperate clearances in the home penalty area, however Meadow weren't able to create a clear cut oportunity and the Bankies held on for a great victory

The cups have produced many memorable matches this season, and this was as good as any. Budgie McGhie's selection and tactics were sound, and it was a tremendous effort given the lack of activity in the last months. With a mountain of league cames still to get through, The cups may prove to be the club's best chance of success this season, and with performances like this you can't write off the Bankies easily.