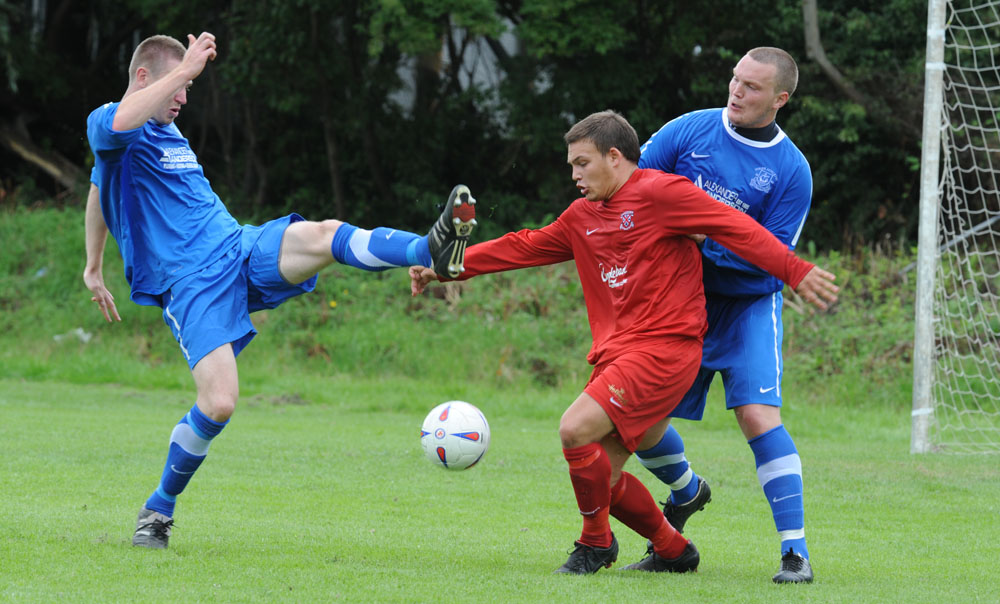 A horror show second half display by Clydebank gifted local rivals Yoker Athletic all three points as they went down by two goals to one in this crucial league cup match. It means that the “hoodoo” continues as the Bankies have now failed to win at Holm Park against their landlords in all eight fixtures since 2003. More seriously, this defeat has all but ended Clydebank’s interest in the sectional league cup. Only victory by four clear goals against Ashfield on Wednesday will give the club passage to the quarter final stage. On the evidence of this performance, it doesn’t seem likely.

It was a rather inauspicious start to proceedings with neither team looking to put the other under any pressure. However, just as they done against Glasgow Perthshire earlier in the week, the Bankies scored with their first shot on goal. Nikky Cairney was bundled to the ground just outside the box, and Gary Lynn crashed home a long overdue free kick effort to put the Bankies in front.

Clydebank had never opened the scoring at Holm Park against the Whe-ho and with that barrier breached and the two-division difference between the clubs it seemed likely that the Bankies would push on from here. The evidence thereafter appeared to support this as Mark Hailstones tested Clark with a shot from 20 yards, then star performer on the day, Ross Campbell, was unlucky to see his headed effort come off the crossbar.

The Bankies continued to dominate and should have doubled the lead on twenty minutes. Nikky Cairney received a short corner, and drilled his way to the bye line before neatly cutting back to MacKinnon. The Bankies midfield powerhouse tried to curl it in with the outside of his foot, but the ball was deflected away.

It took Yoker 32 minutes before registering an effort on goal, when Murray got his head to a cross from the left, but the ball drifted harmlessly wide. A minute later and Dymock missed the clearest opportunity yet. MacKinnon showed great industry to win the ball on the edge of the box and prod it through to Dymock, but he thrashed the ball over the bar when he really should have burst the net.

Despite being the better side, the Bankies didn’t seem to have a great energy and zip about their play, preferring to pass the ball about when perhaps a little more direct and incisive play was required. As the half drew to a close Yoker were beginning to get a handle on this and started to play further up the field. This growing confidence almost saw McManus grab the equaliser when he stabbed the ball over the bar from eight yards after a knock down by Murray.

Yoker continued their ascendancy in the second half. Just a few minutes in, and McKellar tested Gonet with a low shot. The after 50 minutes, a careless cross-field pass by Cairney was intercepted, and the ball was immediately slipped through to Murray, but luckily Gonet read the situation well and collected the ball.

Clydebank were now struggling to put any kind of coherent move together and Yoker were almost on terms after 62 minutes. A Whe-ho free kick was allowed to squirm through the defensive wall, and only a desperate clearance by Campbell prevented an easy finish. From the resultant throw in, Rooney looked to have scored the elusive goal for the hosts, but bad fortune saw the ball ricochet off a team-mate and go clear.

With 69 minutes on the clock Clydebank finally carved out a decent chance when a surging run by Darian MacKinnon, that is fast becoming his trademark, ended with a pass to Ross McPherson whose shot was parried over the bar by Clark. This was only a respite as three minutes later Yoker finally got the goal that they deserved. A fine move and cross down the right wing was finished off by Murray who volleyed high into the net giving Gonet no chance.

With Clydebank now severely on the back foot, Yoker’s Matthews almost scored the goal of this, or any other season when he smashed in a first time shot from fully forty yards that just about uprooted the goalposts when it crashed of the crossbar. Finally, the Bankies woke up and for the remaining quarter of an hour showed a bit of urgency and began to take the game to the Whe-ho.

However, the Bankies did not make any real dents in the Yoker rearguard. McPherson had a tame header easily saved, Tommy Martin made an opening for himself but Clark had a comfortable save to his left. The pick of the late Bankies chances came from MacKinnon when he drove a low shot goalward, and this time Clark had to work to turn the ball around for a corner.

The match had a sting in the tail for the Bankies support, however. Already disappointed at not managing to earn a first victory at Holm Park, the fans were stunned to see the result turn into a defeat when an awful attempt at a clearance by Moffat broke into the path of Murray. Yoker’s number nine accepted the ball gleefully and despatched it into the net to claim an extra time winner for the homesters.

The Bankies hopes of going any further in this tournament are slim now, and the promising pre-season form has not transferred to the competitive arena, where the performances – all against lower league opposition –have got progressively worse. With same league rivals Ashfield to come, an improved performance is required to give the club the best launch point into the start of the crucial league campaign.