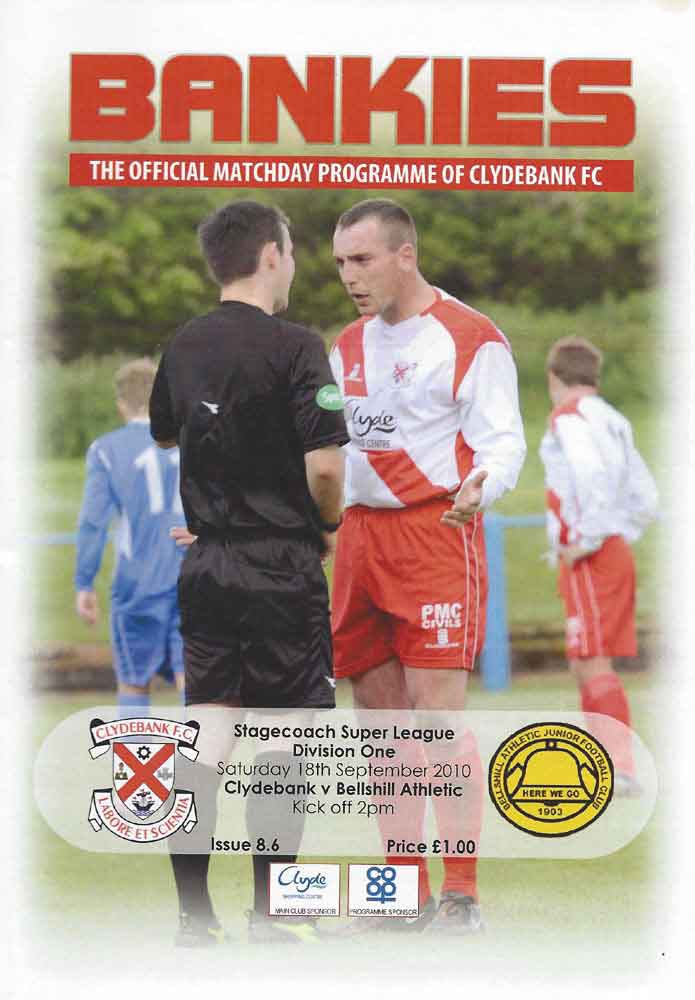 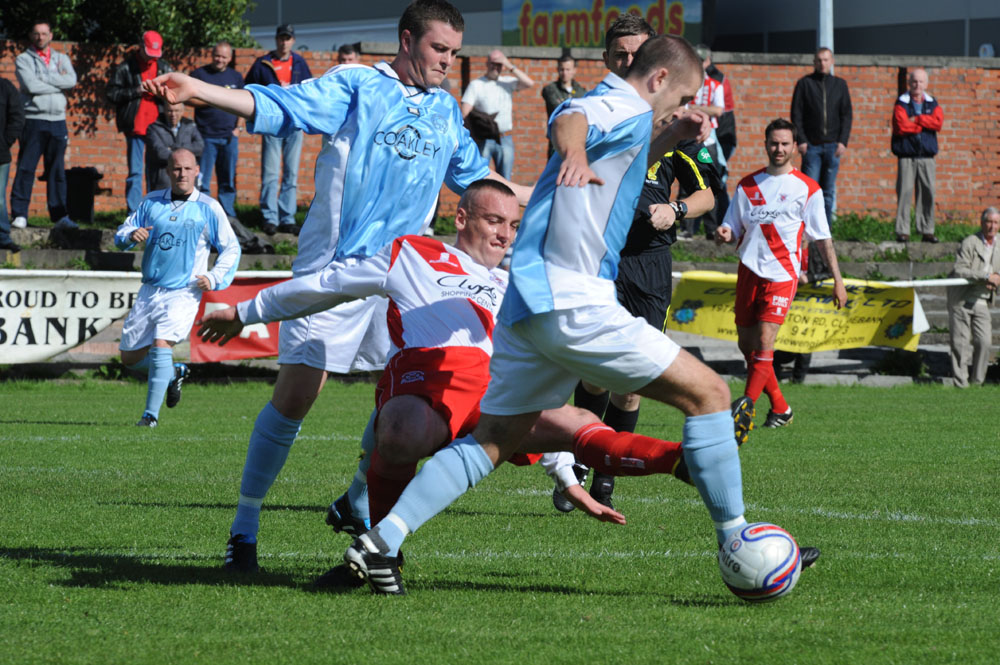 Clydebank cruised to victory over Bellshill at Holm Park in possibly the best performance the players have produced this season. There are definite signs that the side is starting to gel, and the margin of the scoreline could easily have been more than two.

Budgie McGhie made two changes to the side that drew at Shotts last week with Stevie Dallas coming in for his first start of the season and Martin McComish starting on the left side of midfield. The casualties were Stevie Dymock and Ryan Holmes. In the Bellshill side and facing the Bankies for the first time, was striker Andy Selkirk. The phrase, “I bet he scores a hat trick” seemed to come out of every mouth before kick off, but thankfully the Bankies defence were in no mood to let that happen in a hurry.

The opening twenty minutes of the match were fairly even, with the visitors perhaps having the bulk of the possession. However, the goal attempts during that period all came at the Bellshill end. The first to have a shot at goal was Tommy Martin whose daisycutter went wide of the post after a lay off from McComish. Then, after 10 minutes Paul Allum should have done better than prod the ball wide of the post from 10 yards after working a fine 1-2 with MacKinnon.

Just after the quarter hour mark and Tommy Martin made a fine bursting run from his own half, and he played in Hailstones at the edge of the box. The Bankies front man slipped, but still was able to get a shot away only for it to be deflected out for a corner kick. Bellshill did not make much headway at the other end with the only dangerous moment coming when Selkirk narrowly missed getting his head onto a Crozier cross. There was also a handball claim for the visitors in the box, but neither the ref nor the linesman was interested.

The opening goal arrived after the match had hit a bit of a lull, and it was the perfect way to break it. A long ball found Mark Hailstones on the right hand channel, and as he entered the box he shot diagonally towards the goal. Although, the goalkeeper had to dive to save, he really should have done better than just push the ball out in front of himself, where Stevie Dallas said thank you very much and pushed the ball into the net to open his account for the season.

Five minutes later and it was two nil. From a Bellshill corner, Gonet threw the ball out to Allum. The versatile Bankies midfielder making his 100th start for the club virtually ran the length of the field, before pushing the ball infield at the edge of the box. A Bellshill defender made a hash of cutting the ball out, and it allowed MacKinnon the opportunity to prod the ball forward to McComish who expertly finished to score his first goal for the club.

Bellshill looked extremely fragile as half time approached as the Bankies looked for a killer third, and had a possible shout for a penalty themselves when Hailstones appeared to be held back after a mis-hit McComish overhead kick went into his path. Again the ref would not entertain the claims.

Bellshill made a change at the break and they did noticeably raise their game, and McKenna gave the visitors their first real shot at goal, but Gonet saved easily. It was the Bankies who came close again, however. Allum Lifted the ball over the Bellshill defence, and MacKinnon sent in a superb shot from an acute angle, but Calder parried it away past the far post only for Hailstones to head the rebound just over from another tight angle.

McKenna gave Bellshill another sight of goal moments later when he set a chance up for Dolan, but he could only toe the ball wide of the post under pressure from the Bankies defence. Before long the play was back at the other end, as Barry Crawford tried to penetrate the opposition rearguard. He was tackled at the edge of the box, and the ball broke fortuitously for Hailstones inside the box. From his position on the left hand side he should have shot across the goalkeeper, but he went near post and the goalkeeper was positioned well to turn the powerful shot around the post.

Midway through the second half, Bellshill went three up from to try and get back into the game but it made little difference to the flow of play, and Clydebank should really have added a third when Hailstones missed a great chance. Tommy Martin showed great skill at the edge of the box and played the ball to MacKinnon who powered to the bye line. He rolled the ball into the six-yard box, where Hailstones had made a fantastic near post run, but he just couldn’t get a solid enough touch on the ball, and it skidded off his foot and went past the far post.

After this, Bellshill had their one real opportunity to score when Livingston his head on the end of a corner kick. Gonet was beaten, but Moffat was in the right place to head off the line. With time running out, the Bankies tried but couldn’t get a third goal. McPherson missed a similar chance to Hailstones’ angled shot when he went for the near post instead of across the goal, and in injury time a penetrating run and shot was saved by Calder denying MacKinnon the goal his performance deserved.

A great result and performance today. Dallas certainly gives the front line something it has been missing in recent weeks. MacKinnon and Martin look strong in midfield, and with the defence handing Budgie McGhie a third consecutive clean sheet, the spine of the side is now taking shape. They have laid down a marker this afternoon, and this is the standard that will need to be produced consistently if the club are to challenge for promotion.