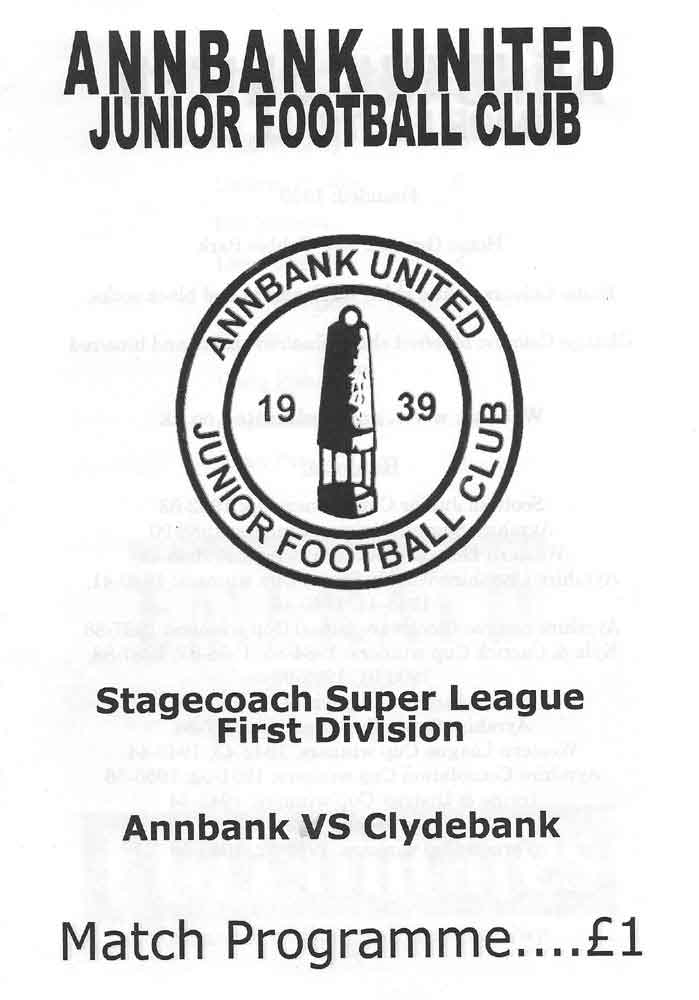 Clydebank recorded a straightforward win over relegated Annbank United at New Pebble Park. With an uneven pitch accompanied by long grass there was never going to be an abundance of silky football played.

Clydebank completely dominated the first half with a flying Hailstones volley from the edge of the box that McGarrity turned round his left hand post the pick of the early chances. The opening goal came on the half hour through Stevie Dymock. Hobbs crossed the ball from the left and Dymock and Allum were caught in a melee. It was Allum who touched the ball goalward, but Dymock made sure by stabbing the ball into the net from 3 inches.

Annbank gave a much better account of themselves in the second half, and with a strengthening wind behind them they grabbed the equaliser after 53 minutes Paterson cut inside from the left wing and whether he was shooting or crossing could be debated. However, as the ball passed the man running to the near post and flew into the other corner, Stefan Gonet could do little to keep it out despite a despairing dive.

You can tell by luck which team is top of the league and which is bottom, as no sooner had Annbank got on terms, that they went behind in unfortunate circumstances. Charlie Hobbs tried to wriggle past a defender in the box, and he took a tumble. The ref duly awarded a spot kick, although I doubt he would want to view an action replay of the incident. Godon Moffat who has become the Bankies main man when it comes to penalties did a professional job in despatching the ball into the net sending McGarrity the wrong way into the bargain.

The result was never really in doubt as Annbank didn’t really test Gonet again in the Bankies goal whilst goals could easily have been scored at the other end. Hobbs had a bad miss when he and Dymock had a two on one situation, and then Mark Hailstones had an incredible miss from two feet out when he connected with a MacKinnon cross only to see the ball shoot up over the bar. In fairness, he was under severe pressure from a defender, but it was amazing that the ball did not cross the line.

With eleven minutes remaining the Bankies could have been made to sweat when Kevin Murray was ordered off after picking up a second yellow card in the space of a few minutes. Not the most deserved sending off the world has ever seen, but presumably correct by the strictest letter of the law.

However, the Bankies made sure of all three points in the final minute, when McGarrity left his goal to aid the Annbank attack when they were awarded a corner kick. Nothing came of it, and Gonet cleared the ball upfield. Amazingly, McGarrity made no real effort to return to his goal. After Dymock had received the ball, lost it, and Tommy Martin won it again, the keeper had not even reached the halfway line. Tommy Martin pushed the ball clear to his left and calmly stroked the ball into the empty net from 30 yards.

Another vital three points, and amazingly with three games remaining the Bankies haven’t even secured the play off spot. However, it should all come into focus within the next week as games start to run out for the chasing clubs. The Bankies just need to make sure they can keep up their levels and continue to pick up points to see them over the finishing line.