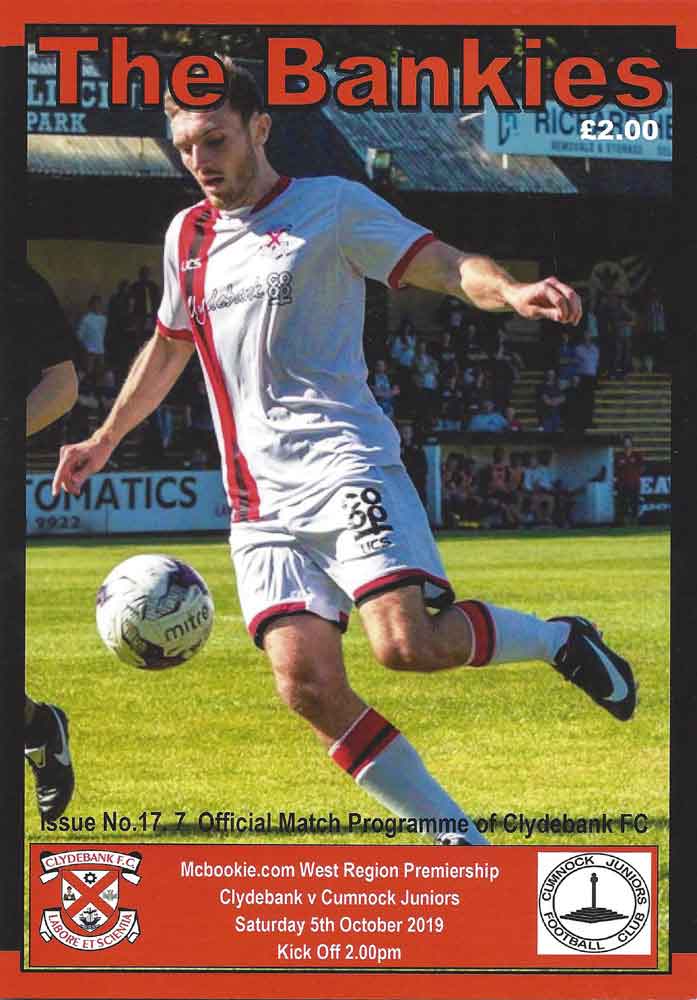 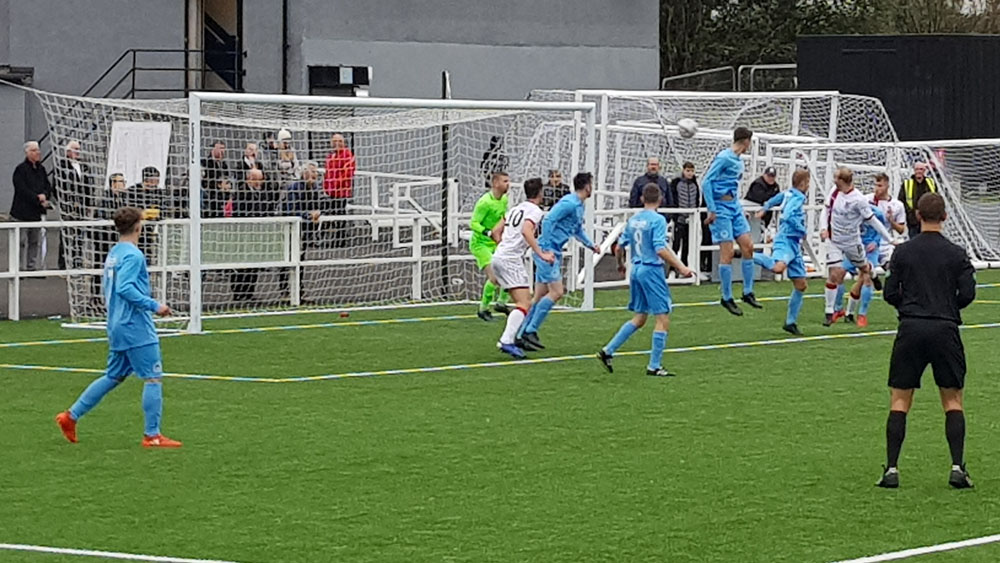 Don’t be fooled by the scoreline! Clydebank won this game much more comfortably than the result suggests. As well as scoring three times the Bankies hit the woodwork three more and Semple had several good saves in the Cumnock goal. An injury time goal for the visitors from yet another goalkeeping error took the shine off the score and made the whole thing look closer than it actually was.

The Bankies took to the field with the same line up as last week with Darroch and Shelvey both still missing. Cumnock who have been on a bad run recently started the match in a positive frame of mind with McLaughlin having a shot at goal within the first 60 seconds. A better chance arrived from a free kick practically on the corner flag just six minutes later. An in-swinging cross from the right was deflected goalward by Crawford at the near post, but Waters got down well to save,

Just like last week the Bankies opened the scoring with their first real chance of the match, A harmless enough looking pass was made by Byrne to Lynass on the left hand side of the penalty box. Suddenly, finding himself with unexpected time and space Lynass beautifully curled the ball low into the goalkeeper’s far post for a real goal out of nothing.

This brought the Bankies to life, and Nicky Little was soon brought down a good 25 yard from goal. It was in a nice position for a left footer and Kyle Munro obliged by thumping a powerful drive off the crossbar with Semple beaten.

Just after that Cumnock should have equalised. A cross from the right should have been Water’s ball all day long but he hesitated allowing Miller to nick in ahead of him. However, the striker mis-judged his header and it luckily hit Waters and the keeper claimed it at the second attempt.

The Bankies extended their lead after 22 minutes and it was a screamer of a goal. Kyle Munro obviously feeling he had his eye in after hitting the bar, picked up the ball on the right wing. He cut inside and bent in a wicked curling shot that went straight in the top corner at the far post. He’s tried this a few times this season, and he caught this one perfectly for a brilliant goal.

Again, Cumnock could have got themselves on the scoresheet after 24 minutes. Intricate passing put Campbell through on goal, but the winger seemed undecided on what to do and simply prodded the ball into the air and that turned out to be an even simpler save for Waters.

The Bankies were looking to kill the match off with a third goal and they nearly got it just 4 minutes later. Rowan played a fine through ball releasing McClair on the left channel. The winger composed himself and hit a low shot, but Semple dived full length to his right to turn the ball away for a corner.

There was a little bit of flaring of tempers just after the half hour that saw Bankies assistant boss Gary McMenamin and Ryan Caddis Both yellow carded. McMenamin should have known better to have gotten involved with his experience and it was to cost him dear later in the match.

The game became scrappy after this with Cumnock getting a bit more of a foothold in proceedings. This continued into the second half with the Bankies looking a bit flat, although they hit the crossbar for a second time after 52 minutes. A free kick taken by Lynass was met by McMenamin, but his luck was out as his header crashed off the woodwork.

As it goes sometimes, Cumnock pulled a goal back just two minutes later. The ball was played across the box low and hard from the right hand side. A couple of mis-cued attempts at clearances saw the ball fall for Burns at the back post and he steered it home to cut the deficit.

Cumnock were buoyed by this and were the better team for some after this but really didn’t look like they had another goal in them. Eventually the Bankies made a clear cut opening themselves after 69 minutes when good work by Cammy McClair saw the winger knock the ball beyond the Cumnock defence for Nicky Little. The Bankies striker won the race with Semple for the ball but his stretched effort saw the ball sneak past the wrong side of the post.

Suddenly. Clydebank seemed to wake up and 60 seconds later they restored the two goal advantage. The ball was played forward to Nicky Little who sold pretty much the whole Cumnock defence a wonderful dummy putting himself clear on goal. As he hared towards goal, he was being closed down but he selflessly squared the ball to McClair who stroked it home with his side foot.

The Bankies were on fire now as Little chased down a lost cause on the left wing. He knocked the ball to Lynass who whipped a cross into the box for the Unmarked Munro whose misjudged header beat Semple but ricocheted off the post.

The Bankies made their fourth clear cut opportunity in as many minutes when a great run by McClair was blocked on the left wing, however the ball broke to Byrne who played a pinpoint pass to Lynass. The forward moved the ball onto his left foot and lashed in a tremendous drive that was beaten away by the Cumnock keeper,

With the game pretty much won the Bankies received a triple blow in the closing stages. Aaron Millar who had literally just been on the pitch for a few minutes landed awkwardly after winning a header, and looks like he may have done himself some serious damage.

Then, Gary McMenamin was red carded for hand ball. It looked pretty deliberate from my angle and was foolish as he will now miss next weeks game against Hurlford due to suspension which causes a problem with Darroch still out.

From that resultant free kick the Bankies gave away a needless goal. The kick must have been around 35-40 yards out and although hit hard enough it should have been dealt with easily enough but Waters palmed the ball out in front of himself allowing an easy finish for Burns.

The last ten minutes took the shine off another decent performance for the Bankies. The first half was entertaining with both sides having chances, and the second was a bit more dull with Clydebank having a real purple patch in the middle before it went a bit dull again. Overall, there are no real grounds for complaint as Clydebank were undoubtedly the better side, but McMenamin getting himself sent off wasn’t great and it gives Moffat a bit of a problem for next week with Vezza the only real option to take over in the centre of defence.