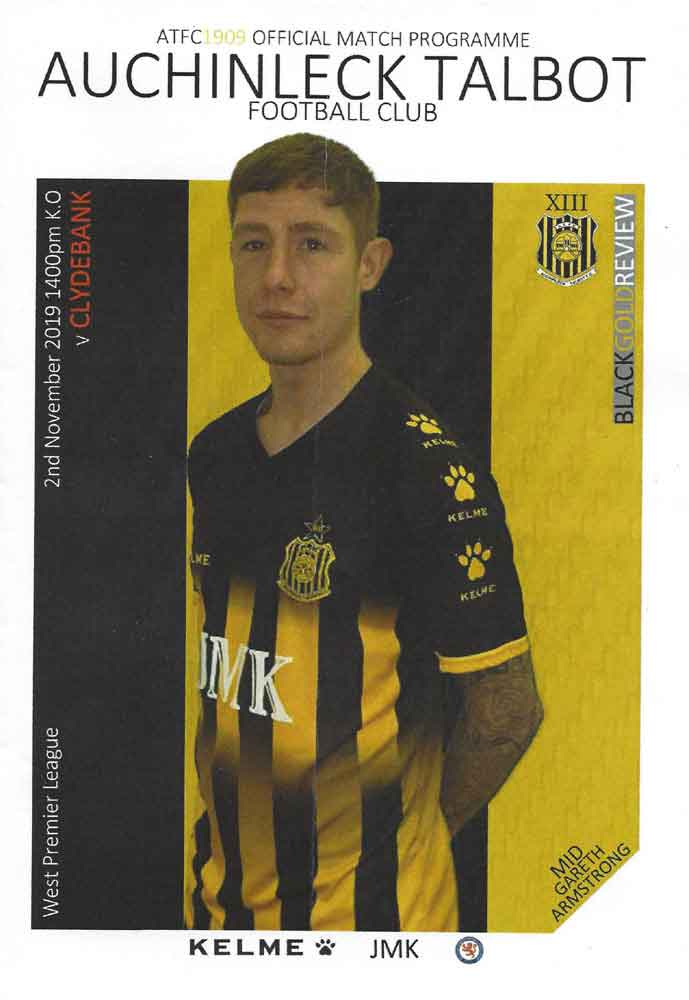 Clydebank can have no complaints after being defeated by Auchinleck Talbot at Beechwood Park this afternoon, however they will be disappointed by losing two late goals which made the scoreline look much worse.

Let’s make no bones about it, Auchinleck are a superior team to Clydebank in almost every department and the game plan today was definitely to try and take the sting out of Talbot’s attack and try and sneak a goal at the other end. The team selection backed that up with Vezza and McMenamin put in the midfield to try and beef up the defensive side of things.

Clydebank were under almost incessant pressure for the half hour in this match. Something seems to come over Clydebank players when they go to Beechwood. The ball gets the hot potato treatment and any shot in front of goal is snatched at. The tentativeness that seems to affect a number of them is bewildering. Talbot are a good side and you expect to be on the back foot, but Barcelona they are not.

The one area that the Bankies struggled with all day was the high ball. Every single one of the Talbot players can challenge for the ball in the air. McLean and Byrne hardly won their aerial battles all day and they are two of the Bankies better players in the air. Numerous home attacks came from this direct style of play and it works because of their physicality and desire to win the ball.

Prior to opening the scoring just after half an hour, Talbot made several good openings but failed to hit the target with any of them, though there were a couple of narrow squeaks from long range efforts by Armstrong.

It seemed a goal would come eventually but it seemed a bit on the lucky side when it arrived. It looked like there might have been an infringement in the build up as the ball broke to Pope on the left hand side at the edge of the box. He struck the ball well but it took a deflection that made it unstoppable and it soared into the top corner.

The goal seemed to relax the home side a little too much and this allowed the Bankies their first sight on goal. Nicky Little had a reverse shot, but he hurried his effort and made a poor connection. Just before the break Lynass did well to hold off a challenge to get a shot away but again it wasn’t the best of efforts and the ball dribbled wide.

The second half was rather strange in that Talbot were playing within themselves and did not have the same vigour as they had earlier in the game, although they did look like an extra gear could be found if necessary.

After the hour mark passed, Clydebank had a decent spell on attack and could easily have grabbed an equaliser with a bit more belief. Nicky Little was the creator as he whipped in a fantastic low cross beyond the Talbot defence. Jordan Shelvey’s pace took him beyond his markers, and he met the ball first time, but he will be disappointed that all he could do was steer it into Leishman’s arms.

There were more chances at either end with Hepburn testing the home goal with a low shot from his weaker tight foot and Waters twice had to make saves from Shankland and Hyslop to keep the score to one.

Talbot were obviously concerned enough to make all three of their substitutes in quick succession with twenty minutes to go, and this did seem to stymie the Clydebank attack. Other than one more off target shot by Hepburn following good play by Alexander, it looked like Auchinleck would be seeing out a comfortable single goal victory, until a disastrous end to the match.

With two minutes to go Talbot got a second caused by mis-communication between Byrne and Waters. A nothing ball through the centre of the Bankies’ defence was being shepherded by Byrne for Waters to collect. The keeper inexplicably decided to retreat when he appeared favourite to clear. This caught Byrne out, but he still had time to clear which he failed to do, and Boylan nipped in to prod the ball into the net.

With the heads undoubtedly down, Alexander was carelessly dispossessed and Talbot raced up the park again in stoppage time where Jamie Glasgow met a cross ball from the right flank with his head and steered it into the net for the home side’s third of the day.

I don’t think anyone travelling to Beechwood today thought that the Bankies were likely to win and in many ways the game panned out as expected. Clydebank need an injection of belief when they play the likes of Auchinleck. They are such a strong, physical, disciplined side that they can over-run you if you allow them. In saying that, in patches, the Bankies did give Talbot some problems and probably a 1-0 defeat would have been fair, but the two late goals show how better teams can punish you if you are not on it for the whole match. Next week The Bankies are at home to Annbank in the West of Scotland Cup and will be looking to return to winning ways in the last competition of the season that the club have a real interest in.