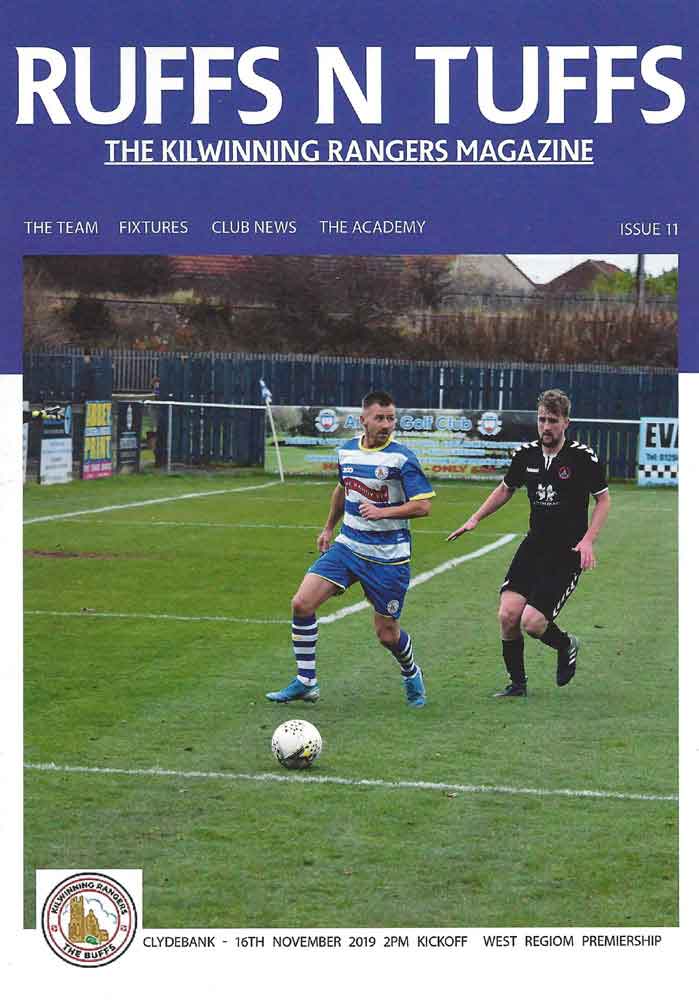 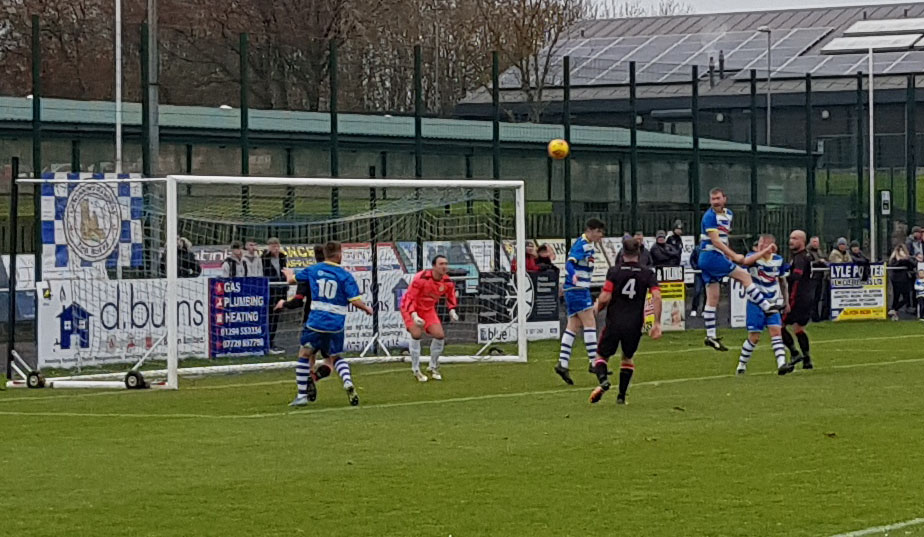 Clydebank can count themselves unlucky not to take a point from league leaders Kilwinning Rangers at the Buffs Park after a spirited second half display. The goal that separated the two sides over the 90 minutes was as good as you are likely to see as veteran Carlo Monti smashed an unstoppable shot into the top corner of the goal clipping the underside of the bar as it went in.

Clydebank, minus the now departed Jordan Shelvey, stuck with the same eleven who disposed of Annbank United last week. Both the returning Liam Rowan and Matt McLean found spaces on the substitute’s bench.

The score at the interval was one goal each, but really the Bankies were lucky to be in that position. Right from the off Kilwinning showed why they are top of the league as they were out of the blocks at lightning speed. This was no surprise to anyone who was at the earlier meeting between the sides at Holm Park, as the Buffs aimed to set the tempo and have their opponents on the back foot.

The Buffs seem to be following Auchinleck’s blueprint by filling their team with guys who can first and foremost compete. They are big, strong and physical, but don’t be fooled as they can move the ball quickly too, and with no little skill.

It is to Clydebank’s credit that they braved this early onslaught with Marc Waters having not one save to make. Unfortunately, when the home side did get a shot on target it went in. It was just after quarter of an hour had gone when a cleared header found McWaters at the edge of the box. He turned on to his right foot and hit a thunderous shot through a ruck of players and into the net giving Waters absolutely no chance.

Clydebank repsonded and had a first shot at goal minutes later when Little hit a low shot past the post from 25 yards out. In truth, the Bankies were struggling to make any inroads, as the age old problem of not being able to win the ball in the air in middle to front positions meant we could not retain possession up the field and were constantly coming under pressure.

However, the Bankies surprisingly equalised just before the half hour. A forward ball was nudged into the box by Little and found Hepburn in a great position in front of goal. The winger took the ball on and lashed it past Markey to draw the sides level.

Kilwinning saw the half out by continually putting the Bankies under pressure without creating too many chances. The credit must go to the Bankies back four who were immense all afternoon. We haven’t seen Gordon Moffat make too many early substitutes in his tenure as Bankies manager yet, but he evidently need more energy from his midfield.

To that end he took off the labouring Vezza and despite his goal the ineffective Hepburn at the interval. He introduced Black and Munro and obviously asked for more from his players and to get the ball moving quicker, and the players responded.

The second half was like a cup tie with both teams going at it hammer and tongs. It wasn’t as if there were a lot of goalmouth incidents to report, but the drive from both sides was impressive. The Bankies gave as good as they got and could easily have gained the lead.

Nicky Little got on the end of a Munro corner but his well directed header was saved by Markey on his left. The same combination from another corner saw Little turn two defenders but could only stab the ball straight at Markey as he came under pressure.

Kilwinning had their chances too as Monti hit a powerful angled shot straight at Waters then the Bankies keeper made the best stop of the day as he pushed a 25 yard piledriver away from the boot of McWaters.

The game could have gone either way, and two chances probably showed how thin the margins can be sometimes. Clydebank had their best move of the match with fifteen minutes to go as Nicky Little broke down the right wing. He was fouled but he still managed to release McClair down the channel. The Bankies winger delivered a superb cross to the back post for Munro. The youngster rose magnificently but the response from Markey was equally as good as he made a great save on his left hand side.

Had this gone in then the Bankies could have taken all three points but just minutes later Kilwinning got the winning goal from Monti and the visitors left with nothing. His run and shot were right out of the top drawer and it was a worthy winning goal of any game. The Bankies were crestfallen and the game limped to the end as Clydebank didn’t have the energy to find their way back into the game and Kilwinning managed the remaining time expertly.

Clydebank shouldn’t be too discouraged after today’s game. Defensively, the players were excellent. It took two superb strikes to beat them. Personally, I thought Michael Bailey was man of the match but the rest of the back four and the goalkeeper can be proud of their efforts today. It should be becoming clearer to the management where the squad needs strengthening. Nicky Little is not an out and out striker and a replacement for Jordan Shelvey will need to be found. The middle of the park is the other area of contention as we can be found wanting in there. Lynass wasn’t particularly involved today and Vezza looked off the pace. It was good to see Kyle Munro back involved as he has the physicality to compete in a way that our other wide players just don’t do. Our league position shows a fair reflection of where we are in relation to the other clubs at the moment, but I don’t think we are a million miles away from being a challenging team. Next week, it’s down to Cumnock who are hoping for a revival under new Manager Tony McInally and one the Bankies could do with winning to get back on track.