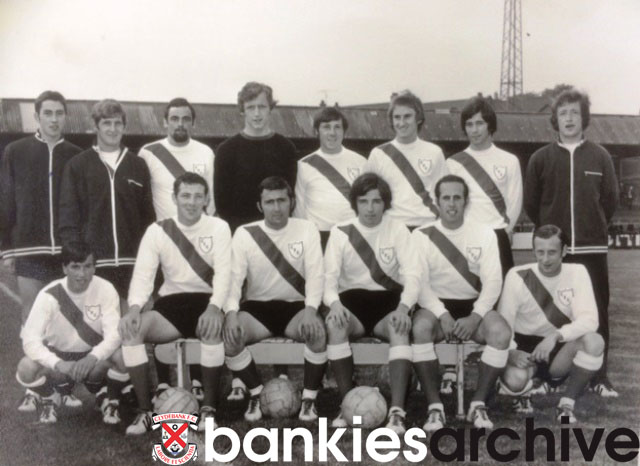 Villa left back Charlie Aitken and Clydebank forward Alan Munro were sent off by Glasgow referee Ian Foote in the 75th minute of this “friendly” at Kilbowie Park last night.

They went off after a clash on the wing during a period when the game was becoming littered with heavy tackling.

Mr Foote had warned player earlier and the incident seemed no worse than many before.

There was considerable confusion before it became apparent that the two players were leaving the field.

It seemed at first that Mr Foote was going to book them.

With players from both sides crowding round, Aitken and Munro emerged from the ruck and headed across the field towards the dressing rooms.

So it was an unhappy ending to Villa’s pre-season tour, Clydebank handing then their second defeat in three days north of the border.

And Villa had George Curtis off the field in the second half because of a leg injured in the last seconds of the first half.

He was hurt trying to prevent Jim Caskie scoring Clydebank’s equaliser in the 44th minute.

Curtis limped off the field and was replaced by young Jimmy Brown in the second half.

The match did little to act as a morale booster for Villa in the build up towards their third division debut.

They were obviously rattled and unprepared for the eagerness of this Scottish second Division side.

From the start Clydebank set about the match as though it was a cup tie and Villa were on a good hiding to nothing.

As the match wore on, the tackling became keener and Villa lot most of their rhythm, being gradually dragged down to a low quality of football.

They were in trouble in the opening minutes of the match with Caskie proving the main source of danger with his darting runs down the left.

In the second minute he shot wide after a fine run, and four minutes later another move split the Villa defence only for full back Danny Gray to roll the shot wide as goalkeeper John Phillips narrowed the angle.

The first Villa effort at goal came in the tenth minute with Bruce Rioch lashing a shot into the side netting.

They still lacked sharpness near goal, but in the 38th minute Willie Anderson hit the post with a shot.

Two minutes later Villa scored first as Rioch broke clear on the left to centre low and hard for Pat McMahon to score from close in.

Villa seemed to be on their way to a comfortable win, but instead they conceded the equaliser a minute from half time. Caskie rounded Curtis and Phillips before scoring.

Both sides stepped up the pace in the second half – and the strength of the tackling.

In the 65th minute Villa almost went ahead again when McMahon flashed in a header that was cleared off the line by Fallon.

Then out of the blue, came a second goal for Clydebank in the 71st minute. From a left wing corner, Phillips dropped the ball under a heavy challenge from Munro and Donnie Wilson pounced to head in.

Two minutes later Munro was warned for a bad challenge on Phillips.

The final part of the match played out desperately with Rioch hitting a post and Anderson firing just wide as Villa searched for an equaliser.

Instead they conceded a penalty a minute from the end when Tiler handled. Fallon scored from the spot.

Clydebank and their opponents from the south came out as two entirely different teams in the second half of this challenge game at Kilbowie on Monday night to provide some non-stop action.

And as the tension rose, with the tempers, along came the black spot of the match when big Alan Munro, who had been harrying the Brum defenders all night, and under-23 Scottish cap Charlie Aitken were sent off after a flare-up near the corner flag at the clubhouse end.

It was all Bankies in the opening minutes. Ex-Celt Mike Jackson, making his burgh debut from Dumfries, slid a pass to Bobby Love, who almost netted in under 60 seconds.

Next to have a go was Danny Gray, who rampaged on to a terrific Munro dummy in the box only to blast wide as Phillips dived in despair.

Next came a couple of warm-up efforts at Mick McDonald's end, culminating in a Tommy Gemmell impersonation by Aitken, whose parting shot was disappointing.

On the 15-minute mark, Jimmy Caskie put an over-head kick to Munro, who cleverly back-heeled to the wee winger. As the ball bounced high in the box, the crowd's claims for a penalty were ignored by Glasgow referee Ian Foote.

The tale of missed chances at either end went on until almost half time, when £100,000 buy from Luton, Bruce Rioch - darling of the few supporters Villa had with them - crossed for ex-Celtic and Dunbartonshire boy Pat McMahon to blast home from the spot.

With five minutes left until half time, the Bankies pushed forward. Caskie saw his point-blank effort saved by Phillips after a mix up between Wright and Chatterley.

But away came the wee man again - how often he had to fight on his own against four defenders -and this time he rounded Curtis and Phillips to smack the ball into the empty goal.

So we had two goals. But the happenings of the second half still did not seem all too obvious.

The first incident came along in 57 minutes, with left-halves Chatterley and Dougie Hay having a confrontation. This ended with the Villa man standing on the home defender's back and a free-kick being awarded to the visitors.

Hay, playing for the first time since his cartilage operation, was taken off and replaced by Bobby Doyle, a high scoring Junior of last term.

Next, came a Rioch-Ruddy feud. The free again went to Aston Villa.

McMahon had another chance when he walloped the ball at the empty goal, only to see Gray pop up to clear.

The men from the land of the Golden Shot weren't landing on target.

Old favourite Andy Lochhead, looking uncannily like Bobby Charlton from the back, managed to escape the clutches of Ruddy and Fallon in the 72nd minute, but his headed try failed to live up to the standard we have come to expect from this high-flying centre.

Donnie Wilson, end-of-season signing from Vale of Leven, made it a personal dream debut when he smacked home No. 2 for the Bankies in the 71st minute.

Munro had headed the ball on to the inside-man's foot from a Caskie curling corner.

The 2,000 crowd - a third of those who turned up to see Villa at Motherwell on Saturday - were roaring on their youngsters now.

And the excitement crept on to the pitch. For seven minutes later came the Aitken-Munro bout.

Ten minutes from the close, Rioch hit a post, the ball rebounded from Gray from a corner and nothing came of the move.

Clydebank slowed the pace to some inter-passing around the Villa box. But as the Kilbowie fans shouted for No. 3, their wish was granted when the Bankies were awarded a penalty for handball.

Jim Fallon stepped up to make no mistake with the 90th minute spot kick.