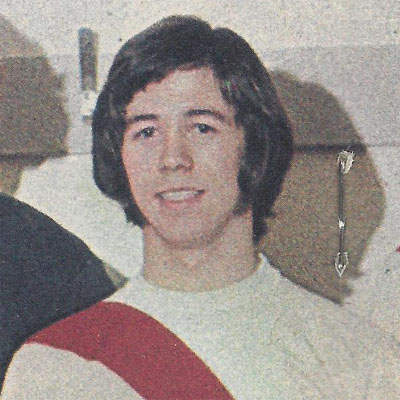 Dougie Hay had the most marvellous football career at Clydebank Football Club. He was one of the original “ Bankies Babes “ signed at 17 years old from Partick Athletic. He was club captain, he won a Scottish League Second Division winners medal when Clydebank finished champions in 1975/76. He picked up a runners up medal when Clydebank lost the Spring Cup Final 4-2 to Airdrieonians after extra time in the same season. The following season he picked up another medal when Clydebank finished runners up to St. Mirren in the Scottish League First Division and won promotion to the Premier League for the first time. He took part in many memorable Clydebank matches through the years, The Battle of Methil when Clydebank lost 6-0, conceded a penalty, had three men sent off, two in the first half, and lost their goalkeeper to injury. He was in the squad (substitute) that beat Arbroath 8-1 on 3 January 1977 or “Adidas Samba” day as it is known in some quarters. And who can ever forget the four game marathon League Cup Quarter Final epics against the mighty Glasgow Rangers. He has the distinction of being the only Clydebank player to score two goals in the same match against Celtic (excluding friendlies). He is also an exclusive member of the “300 club” having played over three hundred times for The Bankies. Amazingly he has yet to be inducted into the Clydebank Hall of Fame.

Fate can play a hand in a players career and in Dougie Hay fate gave him a kindly hand. Dougie had made his debut back in 1968 against Stenhousemuir. He was only a young boy but was pitched in at the deep end to see if he could swim. Well, he swam fine and became a permanent fixture in the side. Early in the 1972/73 season Dougie was involved in a shock transfer to St. Mirren but Dougie wasn’t finished with Clydebank and Clydebank wasn’t finished with Dougie. Things didn’t work out for him at St. Mirren and he returned “home” to Kilbowie and a golden age was soon to open up for him and Clydebank.

Dougie Hay was a competitive, combative midfielder who supported both attack and defence. He had a solid engine, had a bit of dig, could sneak a goal now and then and had a good free-kick. When Clydebank lost the Spring Cup Final at Firhill, it has to be remembered they were a second division team, although champions, Airdrieonians were a division above them. Clydebank had been leading 1-0 through a Mike Larnach goal, and Davie Cooper had missed a penalty, but Clydebank had suffered a bigger blow when Dougie Hay had to go off injured after 30 minutes. Clydebank missed his competitive spirit in the midfield. Ian Browning came on as sub and he himself was subbed off with an injury within another half hour, Bobby Provan replacing him.

He played against Aberdeen in the Scottish Cup at Pittodrie when despite being the better team, Clydebank went down 2-1 to a team who would actually lift the trophy that year. The most memorable matches would have to be those four games against the Rangers, Clydebank were every bit as good if not better than their illustrious opponents and probably lost as a result of fitness. They had played and beat Dundee 2-1 in the league on Saturday, they then played Rangers in the first replay at Ibrox on the Monday night and drew 0-0 after going to extra time. Astonishingly they had to play the next night at Firhill and went down gallantly 2-1, three games in four days was too much for The Bankies. Incredible as it seems now, on the Saturday they played a 0-0 draw away to St. Mirren whom they were battling with for the title. So in one week they played the top two contenders for the First Division title Dundee and St. Mirren and two games with Glasgow Rangers including one match going to extra time. The Fixture man could have been kinder.

Dougie was injured and missed two/three months of the season after this last match with Rangers, in a season Clydebank were going for their second successive promotion. Games he missed, Clydebank dropped valuable points, however Clydebank got over the line and won promotion to the Premier League. The sale of Davie Cooper saw the end of the dream, Dougie Hay scored his only Premier League goal against Motherwell in a 2-1 win, as Clydebank struggled in the top league. Dougie played his last Clydebank match ironically on Christmas Eve 1977 in a 2-0 defeat to St. Mirren at Love Street, he was injured and replaced by Gerry Ronald. He was released at the end of the year and joined Alloa, he later went to Australia joining Fitzroy United. Dougie lives in Australia today and occasionally returns home for a visit.