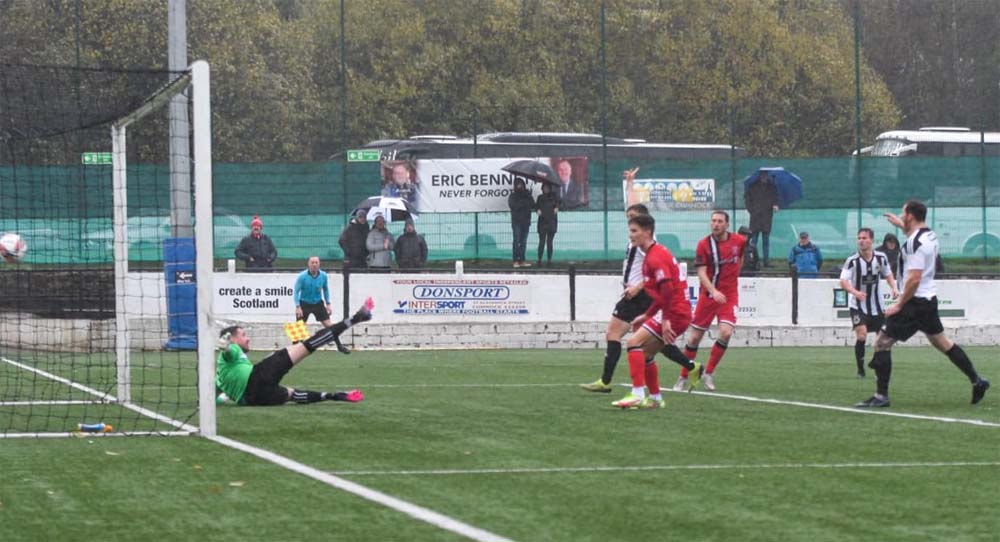 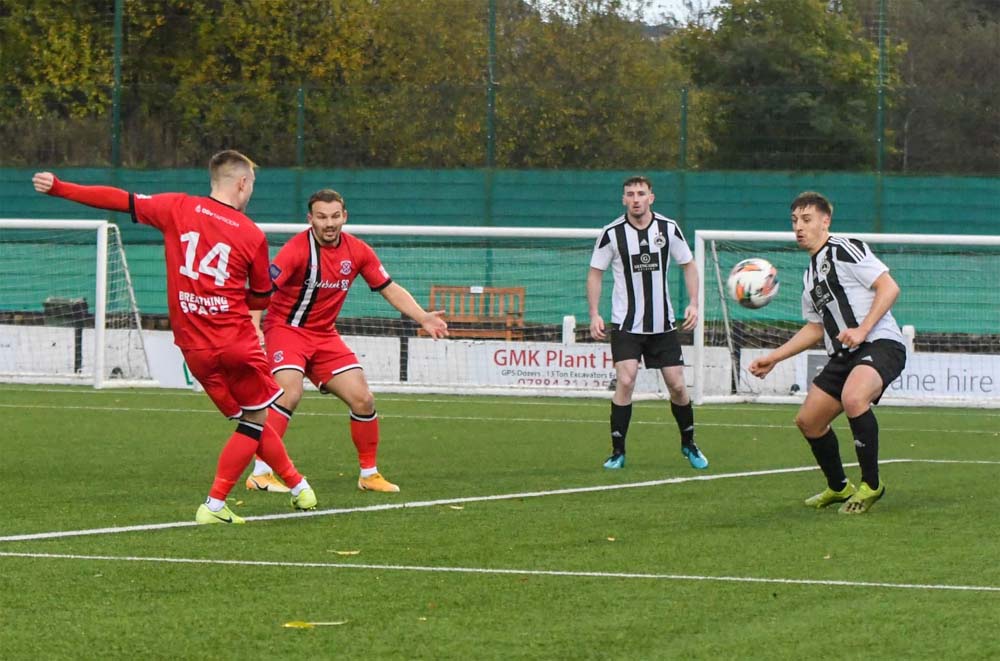 Clydebank successfully fended off the challenge of Cumnock at Townhead Park in a highly competitive match to deservedly claim the three points. A goal in each half from Joe Slattery and Conor Lynass did the damage to give the Bankies a quite unprecedented run, for the club, of 20 consecutive away matches without defeat. So impressive is this streak that only three of these matches have been draws, the rest all being wins. No wonder the travelling support has been getting larger in recent times.

After the cup win at Elgin last week, Gordon Moffat just tweaked the line up with Byrne and McKinlay returning in place of McLean and McPherson respectively. Craig Holmes made his first start since September as Chris Black was unfit after limping off at Borough Briggs.

Today showed the usefulness of the artificial surface at Townhead Park as the wind was blowing a gale and the rain pounded down for much of the first half. Had this been a grass pitch it would have been kick and rush, but instead the players could get the ball down and pass it around fairly effectively.

The game kicked off at a fair old lick with both sides looking to make an early breakthrough. The Bankies forced some early corners and Cumnock pressurising the visitors into a couple of last ditch tackles.

It was Clydebank, however, who started to look the more threatening side. McKinlay hit a reflexive first time shot from the edge of the box that deflected out for a corner. Gallacher took the flag kick and it resulted in a major stramash in the six yard box. It was finally cleared out to Little on the penalty spot. He tried to scoop the ball into the top of the goal above all the bodies in front of him, but it drifted over the crossbar.

Next up was a great move as McKinlay sent a reverse kick down the left wing to McGonigle. The winger cleverly slid the ball just outside the penalty area for the inrushing Hodge, but his low drive was blocked.

The opening goal arrived in the 16th minute. Again, it was Nicky Little getting on the end of cleared header. This time he showed great technique to keep his first time volley down. Cumnock keeper Hughes must have seen the ball late, but he did well to beat it away on his left hand side. However, he had no luck as the ball dropped perfectly for Joe Slattery who clipped it into the net.

It was about this time that the rain intensified making it difficult for the players. Owen Bell tried to respond for Cumnock by working a nice one-two, but his shot was blocked by Byrne for a corner. The Bankies defence have really stepped up in recent weeks and this was exemplified by a superb tackle by Byrne, again, just before the break. Bell was sent through on goal by Conn, but just as he was about to pull the trigger, the Bankies defender threw himself into the challenge and cleared the ball for a corner.

In between those moments for Cumnock, the Bankies best effort came from Lee Gallacher who was set up by Hamish McKinlay. The Bankies trickster hit a whipped shot at the goal but Hughes was equal to the task.

Unfortunately, for Cumnock the rain more or less stopped and the wind was less of an issue just in time for the restart. Nevertheless, the home side almost drew level after 50 minutes. Niven was outpaced by Conn on the left hand side, however Donnelly reacted quickly to close the striker down and he done enough to block the shot which deflected over the bar.

The Bankies seemed to have success with the second ball from half clearances in this match and McKinlay was the next to benefit from this, but his shot was deflected away for a corner. Clydebank seem to have an overall better balance (and threat) with McGonigle and Gallacher in the wide areas. McGonigle appears to be finding his feet in the team and one mazy run saw him waltz down the left wing. He probably should have laid the ball of in the end, but he tried an awkward stab shot instead which Hughes saved easily.

Cumnock were never out of it, and certainly were putting plenty of effort into it. Substitute McIntyre got on the end of a corner, but his volley went straight at Donnelly.

Clydebank finally put the game out of Cumnock’s reach with quarter of an hour to go. Lee Gallacher turned McIntyre inside out on the left hand bye-line before sending the ball low across the box for Lynass. The Bankies substitute rattled the ball off the underside of the bar down onto the line and back up into the roof of the net.

Despite the game now won, Clydebank were to play the final few minutes with ten men as Adam Hodge was red carded. A Cumnock forward was played through on goal, and the full back wrestled him to the ground making him the fourth Bankie to see red this season. The resultant free kick was comfortably defended by Donnelly in the Bankies goal.

This was a great result for the Bankies. There could easily have been a come down after the high of Elgin last week, but the players stuck to their task throughout against a competent opposition. The club are still in the running and remain in third place just five points behind Pollok. The hard games keep on coming as second placed Auchinleck Talbot visit Holm Park next week. The Ayrshire side have only been defeated once this season, but the Bankies draw down at Beechwood Park on the opening day of the season should give them every hope of collecting all three points this time.