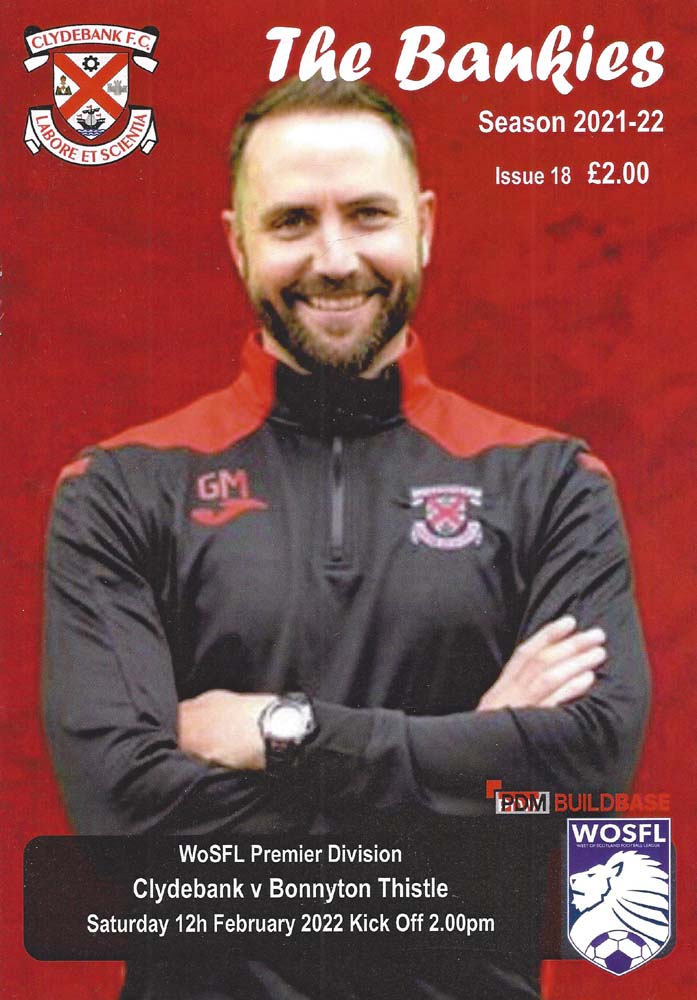 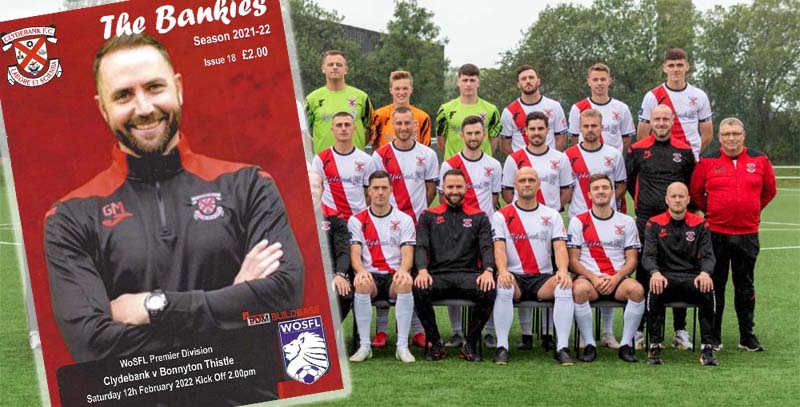 Despite recording their first win of 2022 by defeating bottom club Bonnyton Thistle by the odd goal in three, the Bankies were rather poor and look like a side who have lost their way in recent times. Had Bonnyton brought their shooting boots to Holm Park, the Bankies could easily have been staring down the barrel of a fifth consecutive defeat. The only bright spark was the introduction of Under-20s forward Martin Smith from the bench who looked lively and scored the winning goal with eight minutes to go.

As always seems the case, the Bankies are juggling a few injury issues and a couple of new faces were in the side for the visit of Bonnyton. Kyle Munro returned for a second loan spell at the club and was straight in the side as was Dom Slattery (brother of Joe) who replaced the absent Adam Hodge.

The first half was played in horrible wet and windy conditions, and the Bankies controlled the game in the main without putting Bonnyton under any particular pressure. It never looked at any stage that Clydebank were going to run up any kind of score against the club who are bottom of the table with 90 goals conceded in 29 games, including recent fives (twice), a six and an eight against Largs Thistle just last week.

Both teams could have scored early on as Lee Gallacher hit a sweet volley from the edge of the box after four minutes but the ball was just a little high and wide. Just five minutes later Stevenson had a clear opening when he ran onto a flick on, and found himself with just his namesake to beat, but Bankies Jamie, won the battle as he dived to his right to block the shot.

The Bankies had a few threatening moments after this, the best of which was a great cross from McKinlay on the right wing which was nodded towards goal by Mulcahy. The ball bounced off the ground and struck the outside of the post which keeper Leitch strangely didn’t seem to be all that troubled by.

With the rain teeming down, the play became quite scrappy for a period and was broken by the Bankies taking the lead after 37 minutes. It was good work by McKinlay on the right wing and he sent in a low curling cross which Mulcahy got the faintest of touches to, as it went past the keeper at the far post. McKinlay quite rightly asked Mulcahy if he actually touched the ball, and he said he did but it looked a bit iffy whether he actually did. For a while afterwards, the Bankies kept Bonnyton pegged back without any end product.

The weather cleared up for the second half, and for the most part Bonnyton were the better of the two sides. McColm had a shot from the edge of the box which had the sting taken out of it thanks to a defensive block allowing Stevenson to gather. At the other end Munro could have scored on his first match back as he got on the end of a Gallacher free kick at the back post but he could only steer the ball into the side netting.

Bonnyton then had another gilt edged opportunity after 57 minutes when a long ball on the left hand side beat trialist Slattery who seemed to touch the ball directly into Gilroy’s path. For the second time Bankies keeper came to the rescue by leaving his line quickly and beating away the strikers shot.

With the visitors looking the more likely Gordon Moffat used all three substitutions in quick succession, but just minutes later Bonnyton were back on level terms. A mis-judged back header to the keeper by Niven started it, as Gilroy intercepted and once again Stevenston saved the Bankies by blocking the ball for a corner kick.

From the corner kick, however, Davidson netted from close range as the deep in-swinger to the back post was headed back into the danger area by McColm, and gratefully put away.

The game could have gone either way in the final quarter, as Clydebank’s substitutions finally started to make a difference. With 75 minutes on the clock Chris Black raced down the right wing and quite cleverly cut the ball back across the 18-yard line for Martin Smith. The youngster had plenty of time to control the ball and get his shot away but went for just too much power and rifled the ball over the bar.

Bonnyton were, however, to get the kind of luck only teams at the bottom of the table get as they could have scored only to lose one down the other end. With just ten minutes remaining they had a double chance to take the lead as a shot crashed off the crossbar, and the following scramble saw another effort that was pushed away by Stevenson diving full length to his left hand side.

Almost immediately the play switched down the other end, and Martin Smith found himself in possession on the left wing. He skilfully skipped between two defenders and sent in a curling shot. It looked like the keeper was going to make a save but for a vital deflection that did enough to divert the ball into the net.

It was a bit of a sight at the end watching the Bankies waste time down at the corner flag against a team who had only won twice all season, but it was a relief to get a win after a bad run of defeats.

It was good to see Martin Smith finally get his chance. He has been scoring a lot for the under-20s and was long overdue his opportunity. Say what you like about Jack Steedman in the past but he had a sink or swim attitude with young players. He was never worried about throwing a player in at the deep end, and you soon found out if he was up to it or not. Smith should start against Rossvale next week as there is now a bit of an opportunity to try a few things out in the league with an eye to next season. This is probably the most difficult period in Gordon Moffat’s managerial career at Clydebank when things aren’t going quite as well. This was another performance way below standard – a standard which he set by doing so well earlier in the season. It is clear that to reach that standard on a more consistent basis that changes will need to be made, and the upcoming recruitment for next season will be his most crucial decisions yet. Bonnyton were as good as relegated today but they deserve most of the plaudits as they were unlucky to leave Holm Park with nothing.