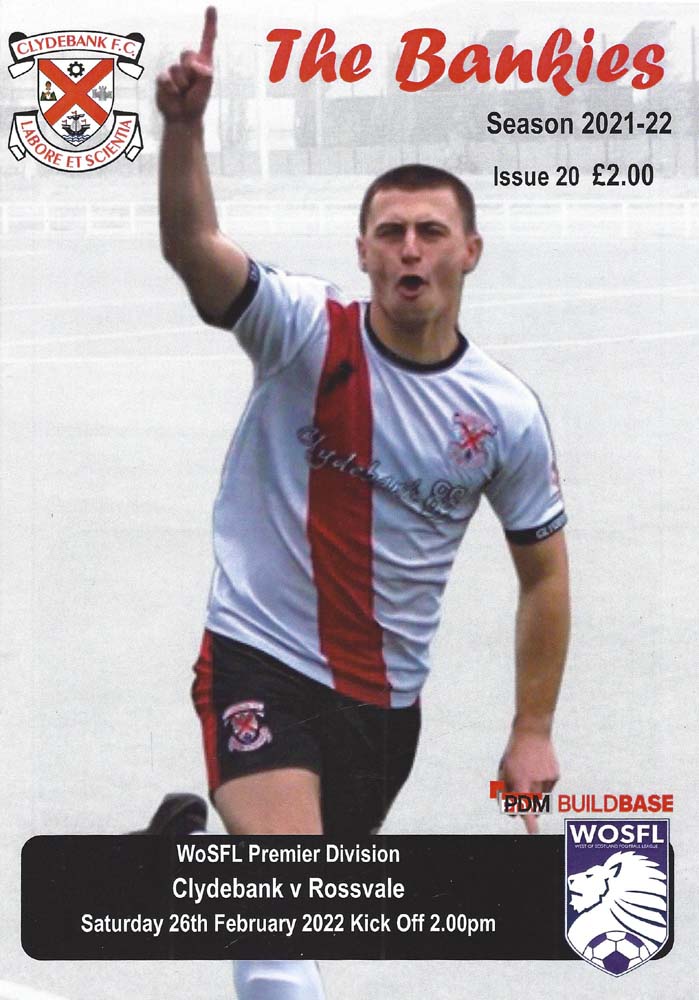 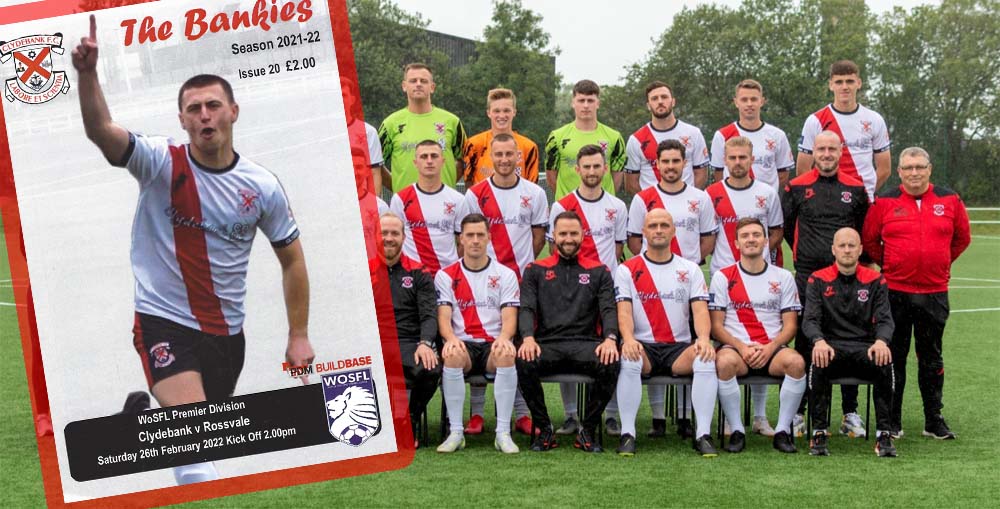 Clydebank defeated Rossvale by two goals to one at Holm Park in the West of Scotland League this afternoon thus completing a run of consecutive home games against the three bottom teams in the division. The fact that the Bankies won all of these games by the same narrow scoreline speaks more to the character in the team rather than any great displays on show. This run of games has been fairly grim viewing and nobody could have complained much if points had been dropped in any of them. However, the points are on the board and that first and foremost means the objectives have been met, and maybe in the past the Bankies wouldn’t have ground out these results.

The Bankies were still missing a number of regular starters from the side and Adam Hodge’s suspension made matters worse. Liam Harris was drafted in to take his place. Jamie Stevenson continued in goals and Martin Smith and Evan Dunne from the 20s were on the subs bench.

It was a typical slow start from the Bankies as Rossvale had the better of the possession gaining a couple of corner kicks without threatening the Clydebank goal. For their part, the Bankies looked fairly clueless going forward, resorting to the long ball more often than not.

Clydebank, however, did take the lead after quarter of an hour with the first real shot on goal from either side. It came from a free kick around 22 yards out after Nicky Little was fouled. It was in a great spot for a left footer, and Lee Gallacher obliged curling the ball over the wall and into keeper Gordon’s left hand corner. It was a good strike but Gordon looked slow moving across his line.

Despite taking the lead the Bankies were finding it hard to make any in-roads into the visitor’s backline. A snapshot from Munro from 25 yards and a header from Mulcahy that was a little too high for him was the best the Bankies could muster.

After half an hour, there was a chance for Rossvale to equalise. Bankies keeper Stevenson came a long way off his line to win the ball, and it spilled free for Urquhart but his shot towards the unguarded goal was deflected for a corner.

Rossvale were to draw level seven minutes before the interval. A foul was given wide on the right wing maybe around eight yards from the bye-line. The free kick was smacked directly into the net by Rodden for a really poor goal for the Bankies to lose. Whether the defence weren’t set correctly or Stevenson was expecting a cross and not a shot, Rodden was clever enough to spot the gap and execute the free kick perfectly.

Ross McPherson replaced Liam Harris at the break, who was finding it difficult in the unfamiliar right back spot. This gave the Bankies the look of a more attacking formation but the game was just as lifeless as the first half with nothing to choose between the sides.

At least any goalscoring chances that came along were at the Rossvale goal. With 53 minutes gone Byrne and Munro combined well, and the latter made space for a long range shot that went wide by a yard or so. A few minutes later the same duo created another chance with Munro crossing low in to the box. Both McPherson and Little had attempts at getting a foot on the ball, but it just wouldn’t fall for them.

Just after the hour Rossvale could have taken the lead with a tremendous effort from the left hand channel around 30 yards out. Unfortunately, I didn’t catch who struck the ball, but it was a stunning effort and only the crossbar stopped the ball going into the top corner.

The left wing was Bankies best avenue to goal and just a couple of minutes later a Munro cross was met by the head of Mulcahy, but it was just a little too high for him and he could only direct the ball past the post. This was to be Mulcahy’s last action as he was substituted. Unless he was injured he should have remained on the pitch, and Nicky Little should have been replaced. Little has been off form recently, and this was another under par performance from the Bankies forward.

With the game still in the balance, Rossvale had the ball in the net after 72 minute when Torrance hooked the ball home from close range following a corner. Luckily, the linesman had spotted an offside and the goal was disallowed.

The Bankies were to get their noses in front less than five minutes afterwards. Dunne sent a terrific through ball for Nicky Little. Normally the striker would have burst the net with the ball but he hit it straight at the keeper. However if made no difference, as straight after Ross McPherson picked up the ball at the edge of the box barely 30 seconds later. McPherson has a great strike on him and he rattled the ball past Gordon who got a good hand on the ball but couldn’t keep it out.

The last fifteen minutes saw much huffing and puffing from both sides and neither looked like adding to their tallies, though the Bankies looked a little more comfortable towards the end.

As stated earlier the Bankies have taken maximum points, which they were expected to, against the three worst teams in the league. However, the heaviest of weather has been made in the process. There just seems to be a lack of spark and creativity in the side at the moment. It is all a bit too laboured and everything just looks difficult. Byrne and Munro fed off each other quite well at times in the second half but the dynamism that this team had earlier in the season seems to have dried up.

The Bankies have a really difficult run of games coming up now with Irvine Meadow, Kilwinning Rangers and Hurlford United all away from Holm Park with Beith being the only home game in the next four weeks. The results have been better than the form, but the displays will have to better against this higher standard of opposition.