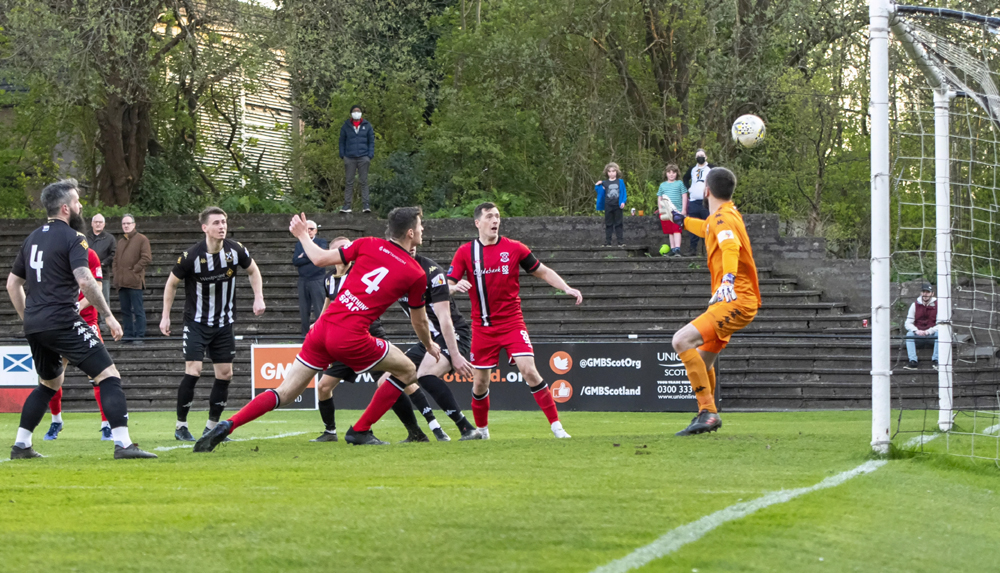 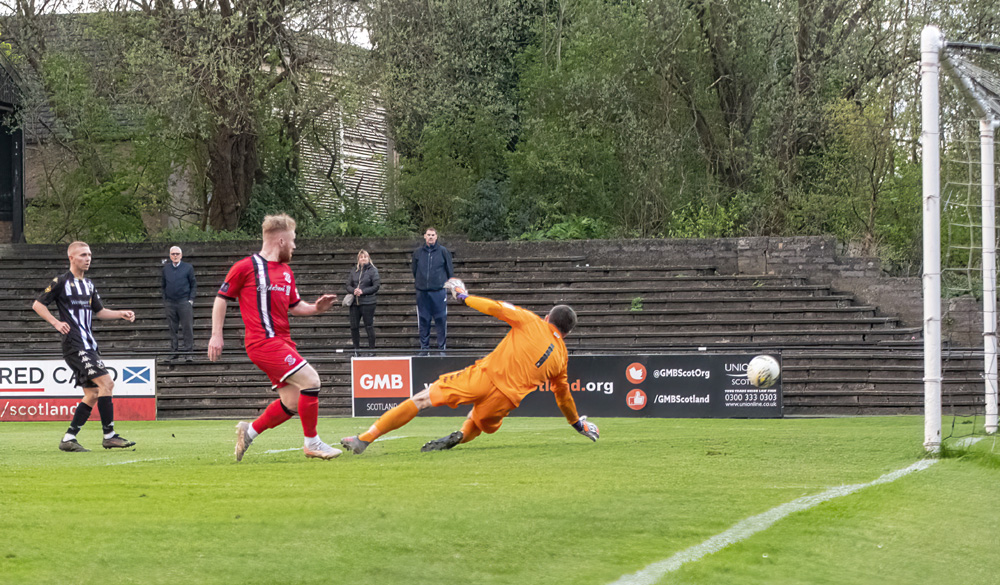 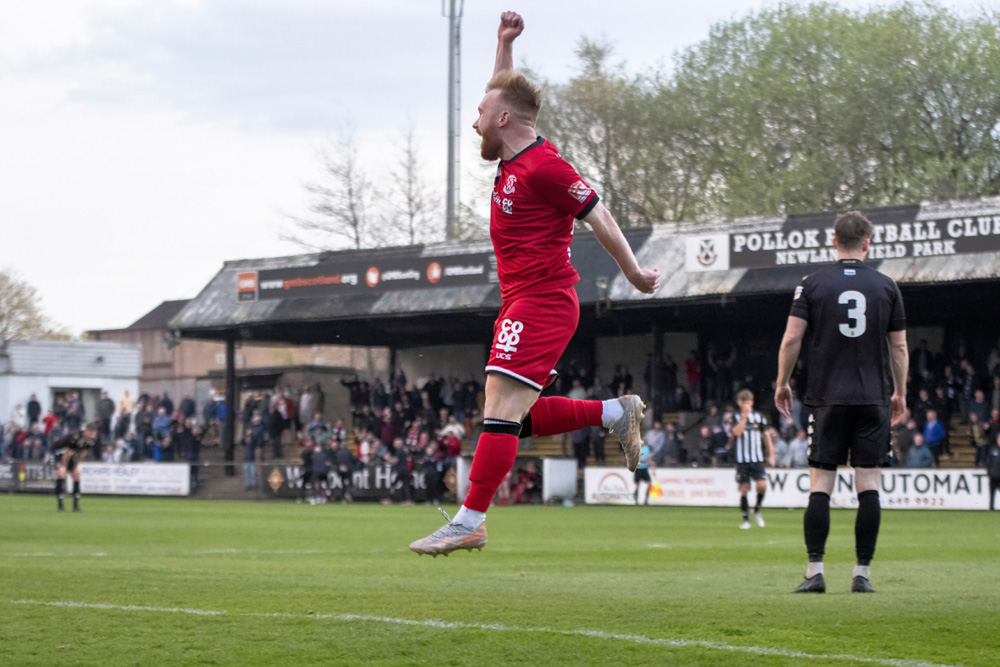 Clydebank racked up another superb away win, this time at Pollok, following on from the 3-0 thrashing of title challengers Darvel ten days ago. And they didn’t half have to battle for it against quite possibly the most aggressive Pollok side in living memory. If you don’t work against this team they will blow you away, however the Bankies were more than a match for them in this department and were good value for this win. This result ended a run of eight straight defeats against the Newlandsfield Park club and gives the Bankies an outside chance of leapfrogging Pollok and finishing third in the table, which would be a great achievement by the management and players.

The Bankies are running with a relatively small core squad as the season comes to an end, and with Hodge, Johnstone, Munro and Byrne all missing the options were limited for Bankies boss Gordon Moffat. He was however, able to keep the same eleven on the field who started against Darvel, though the bench was a little padded out with youngsters.

The first half was played in a ferocious manner, and Pollok were probably the better of the two sides, mainly due to their intimidating style. There were a couple of times where it looked that their overall greater strength could over-run the Bankies, but the players defended admirably and withstood the best that Pollok could throw at them, and goal-scoring opportunities were kept to a minimum.

Grant had the first chance of the match after four minutes when he turned McHugh inside the box. His left footed shot was tipped over the bar by Donnelly, though it looked like it was going over anyway.

Other than that, a wayward attempt at an overhead kick by Fraser was about the best the home side could manage in the opening twenty minutes. After that, the Bankies had their first effort on goal from a free kick following a handball. Nicky Little took it, and he was just a tad deliberate with his shot as he tried to make sure he got it on target, and this allowed Longmuir a comfortable save.

Shortly afterwards Gary McCann had Pollok’s best effort to date, when he skipped inside Kevin Green from the left wing and sent in a low shot to the near post which went just wide, with Donnelly well positioned to save in any event. Down the other end Nicky Little slipped the ball inside to Hamish McKinlay on the right hand side of the box, but his cross/shot was beaten away by Longmuir.

As half time was approaching Pollok were in the ascendancy and gave the Bankies goal some anxious moments. A low cross from the left was met by Dykes, and his shot was well saved by Donnelly, however the ball spun up and over him and was heading for the net, only for Jamie Darroch to acrobatically clear the ball to safety. Another attempt from Dykes just after from the edge of the box was well saved by Donnelly on his right hand side.

The Bankies were a danger on the break, and could have taken the lead in first half stoppage time. Mulcahy side-footed the ball low into the six yard area from the right, and it looked like a simple clearance for Brownlie, but the ball inexplicably went through his legs straight to Nicky Little who unfortunately wasn’t expecting this lucky break. He did still manage to get a shot on goal but Longmuir was all over it and closed it down quickly to make a great blocking save.

They may not have scored before the break, but the Bankies did just that within 60 seconds of the restart. McKinlay was fouled on the left hand side and the ball was crossed into the box by McGonigle to the back post. A Bankies head won the ball sending it back across the box where McKinlay was positioned. Rather than try to head goal ward he cleverly nodded the ball back across the goal, and in a nice bit of head tennis it found Niven who glanced the ball beyond Longmuir.

Pollok huffed and puffed after this, and the Bankies were happy to hold on to their lead and attack as and when they could. It did look for a long spell that it might be the away team who would score again on the break. From one such break a corner was won, and the ball fired across the goal with real pace. Jamie Darroch did well to get a boot on the ball, but it flew across the face of the goal from a tight angle.

Then a clever free kick followed from Gallacher. Rather than cross into the box he sent Slattery free down the right hand channel inside the area, and he swiveled and hit the ball first time sending it just past the far post by a whisker.

Pollok had their moments, mainly from set pieces, as the Bankies gobbled up most of the home side’s direct play. Gary McCann came fairly cross with a close range header that was slightly too high for him and the ball skidded off his head and wide.

Unfortunately, for Clydebank, Pollok managed to get back on level terms with just ten minutes remaining. Slattery fouled Grant needlessly at the edge of box giving Pollok a free pop at goal. Adam Forde strode up and he really couldn’t have hit the ball any better as it flew into Donnelly’s top right hand corner giving him no chance.

For about the only time in the game it looked like Pollok might go on and take all three points. They had a five minute spell when their tails were up, and they almost did snatch it. The Bankies were loose with possession with the ball in the middle of the park and it was fed to Duff on the right hand side. He turned McHugh one way then the other and unleashed a great shot that almost went in the same top corner as their goal.

The wind was to be taken from Pollok’s sails as the Bankies grabbed a dramatic winner. It all started with a superb sliding tackle by McKinlay putting the Bankies on the front foot. Gallacher drove forward and picked out Nicky Little on the right wing. The Bankies captain had a quiet game, but he chose this moment to deliver a quite sublime pass across the six yard box, completely taking out the home goalkeeper and defence. The ball went straight into the path of the in-rushing Lee Gallacher who first timed the ball into the net.

The ref played almost five minutes of stoppage time giving Pollok one last chance when a poor headed clearance by Green was volley sweetly by Duff, but thankfully the ball went wide of the goal.

The Bankies away form this season has been quite sensational, and amongst the best in the league and it has been great following the team around the country. The club were always regarded as the bridesmaid and never the bride back in the day when promotion to the Premier League was missed by the narrowest of margins time and again, and it is a bit like that this season. There are two exceptional clubs in the league, and it was always going to be incredibly difficult to keep pace with them. It has been a fine effort, and with the odd blip here and there, this squad of players probably couldn’t have done much more.

The Bankies have three league games left, starting with the last home match of the season against relegation threatened Glenafton. The Glens are desperate for the points but Clydebank now have a target of third place to try and aim for and can hopefully finish the home games in style.