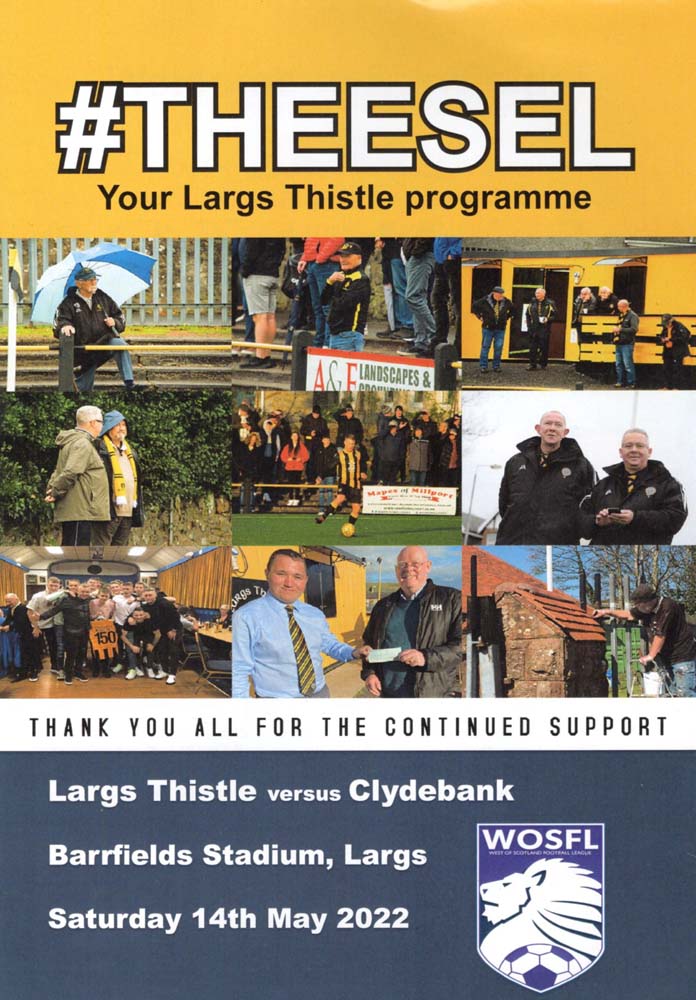 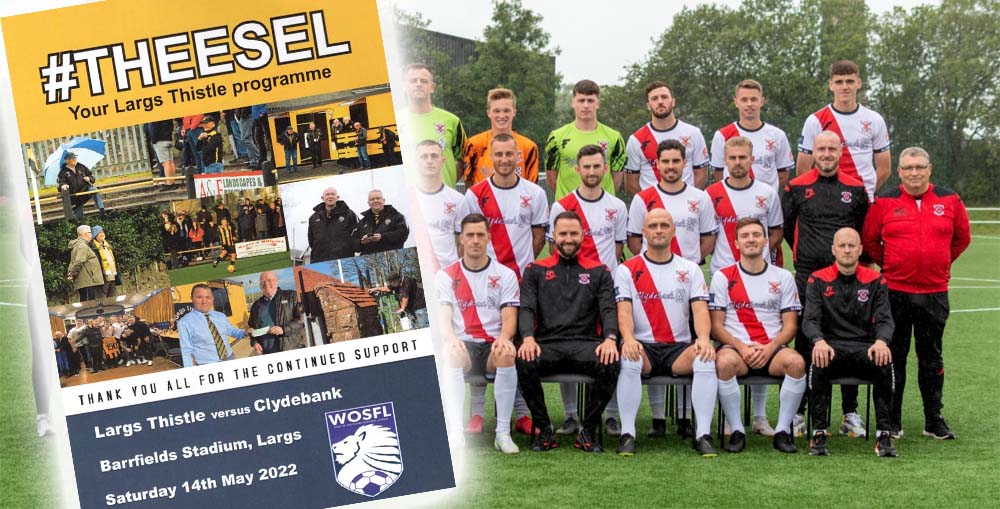 Clydebank’s final league game of the season ended in a 3-0 defeat at Largs Thistle which on the face of it looks like a bad result, but it needs some context to put it into perspective. The Bankies have a quarter final tie at Pollok in the West of Scotland cup tie in just 48 hours after this match, and with the league position settled Gordon Moffat had a decision to make and he wisely chose to make seven changes to the side bringing in a number of fringe and youth players.

This situation was coupled with an in-form Largs side that desperately needed a win to escape relegation and secure Premier League football next season. Despite the scoreline, there was not an awful lot between the sides, particularly in the first half when the makeshift Bankies side acquitted themselves very well, and were unfortunate to be a goal behind at the interval.

The worst thing about it was that it was a self-inflicted wound. Young Adam Smith slipped in the middle of the centre circle and lost possession leaving the Bankies defence short-handed at the back. Simon McBryde raced forward and pushed the ball out left to the prolific Willie Sewell. The Bankies luck was well and truly out as the striker’s shot took a wicked deflection off Adam Hodge’s shin and flew into the top corner giving Donnelly no chance.

There was to be a theme of self-imposed damage throughout this match for the Bankies as they had already made a lucky escape after just three minutes when 17 year old debutant Calum McEwan was woefully short with a pass-back which was intercepted by Faulds. Luckily the midfielder made a poor job of his shot at goal, and Donnelly turned the ball round the post for a corner kick.

With the predicament Largs were in, it was no surprise that they were chasing everything down. However, the two aforementioned chances were about all they mustered in the first half and the Bankies had pretty much handed them to Largs on a plate.

Clydebank captain for the day Ross McPherson led the forward line, but he was to find no luck in the first half as he hit the frame of the goal twice. The first was from a free kick around 25 yards from goal, McPherson has made a name for himself over his career with his powerful free kicks and this one was no different as he sent in a ferocious shot. The ball smashed off the junction of the bar and post and near uprooted the goal. McPherson was convinced that the ball had actually gone into the goal and rebounded out from the rear stanchion, but the ref was having none of it and ended up booking the striker for complaining too much.

The second effort followed from a lovely move at the edge of the box on the left hand side. The ball was rolled inside to McPherson who shot first time with his left foot, but the keeper was rescued by the woodwork for the second time; the ball rattling the outside of the post and bouncing away to safety.

The second half began with the Bankies shooting themselves in the foot again. Sewell began the move from a breakaway and sent his brother George away down the right wing. He sent in a low cross into the box which should have been easily mopped up by Adam Hodge. The defender made a real pigs ear of it as he tragically booted the ball off his own player and it landed right in front of Willie Sewell who couldn’t miss – and he didn’t.

This pretty much killed the game off for the inexperienced Bankies side, and they never really recovered from this blow. Largs had the upper hand without really threatening, as it appeared that they need the Clydebank players to set up all their chances for them.

It was to be another incident of self-harm that finally put the game to bed after 69 minutes when young Calum McEwan was sent off in his first game for the club. Having already been booked he unadvisedly made a rash challenge on McMaster. There have been worse tackles, but any kind of aggressive challenge nowadays sees the ref reaching for his cards, and this was no different.

With the Bankies down to ten men, Largs proceeded to dominate the remainder of the match, and were rewarded with a third goal when Hughes headed home at the near post from a corner kick.

This wasn’t the end to the league season that anybody would have hoped for, but in the circumstances it was understandable. The history books will record the result as a 3-0 loss but anyone looking any deeper will see it was not that straight-forward.

The Bankies can now look forward to their quarter final tie in the West of Scotland Cup against Pollok on Monday night. We should be back at full strength, and hopefully we will see a performance that can extend the season and take us into the semi-final.