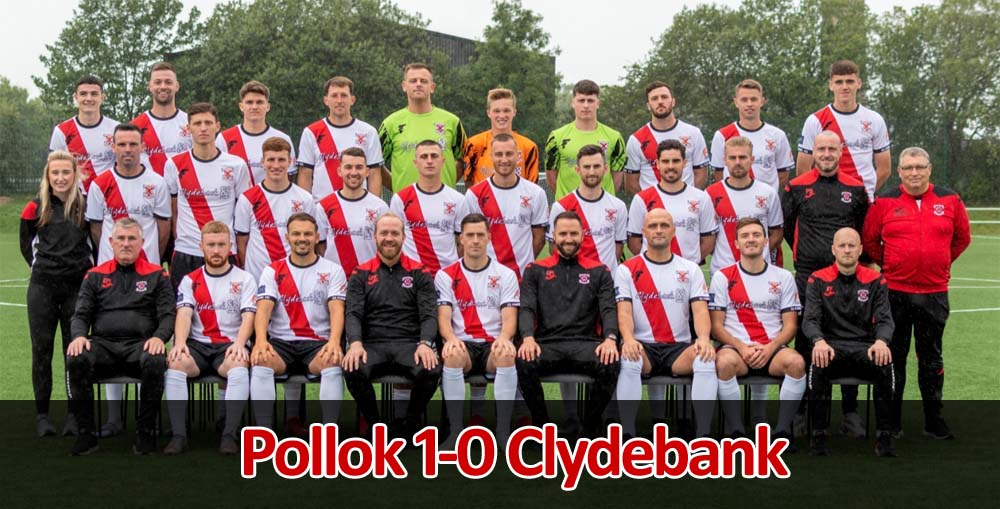 The curtain came down on Clydebank’s season after they were knocked out of the West of Scotland Cup by Pollok in the first ever floodlit match at Newlandsfield Park. It took a Stuart McCann header ten minutes from time to separate the sides, and it was just about deserved as the home side had looked the more likely in the second half.

The Bankies were excellent for the first twenty minutes of the match, but were unable to make the crucial breakthrough, and as the players visibly tired, Pollok began to turn things around. Possibly the key moment for Clydebank was losing Joe Slattery to injury six minutes before the break. It meant Nicky Little who was having a great start to the game had to play deeper and this gave Pollok the edge in the middle of the park.

Games between these two sides have gone up a notch this season, with competitiveness and intensity going off the scale. The first half was a tremendous cup tie with chances at both ends. It was no surprise that the second half was much more laboured, and the home side just seemed to have a wee bit more in their locker.

The Bankies were on their game right from the start, with McGonigle seeing his goal bound shot deflected over the bar for a corner. From the resultant flag kick Clydebank should have had a penalty when Brownlie brought Niven crashing to the ground. It took the ref until the second half to notice his Brownlie’s bear hugging marking on the Bankies defender.

After eight minutes the Bankies should have opened the scoring when Hodge sent in a high looping cross ball that deceived Longmuir. It was hard to tell if the keepers flapping attempt put off Ciaran Mulcahy but his header bounced just wide of the empty goal.

The next close thing for the Bankies came when another dangerous cross from the right was almost put into his own net by Wharton, but the defenders shanked clearance went over the bar for a corner.

It looked at this stage that it would be just a matter of time before the Bankies took the lead. From the corner kick, Nicky Little met the ball with his head at the near post, but somehow the keeper managed to get a glove on it and keep it out of the goal. In the melee that followed Pollok managed to clear the ball to safety.

With 18 minutes gone, Lyon gave Pollok their first shot on goal when he cut inside Hodge, but his low shot was easily dealt with by Donnelly. A period of relative calm followed before the home side began to make an impression on the Bankies defence.

Twice Donnelly saved the visitors with fine diving saves. The first came after 27 minutes when McGonigle was held off the ball far too easily and it led to Duff crossing from the left. The ball was met by the head of McCann, but Donnelly produced a top quality save throwing himself to his left and touching the ball away.

It was at this point that it was becoming noticeable that some of the players were starting to feel the pace of the game. Chris Black, in particular, looked done. He has had a tremendous season for the Bankies and he has run himself into the ground for the cause. One of the few in the side to have played just 48 hours earlier, he just wasn’t able to get up to the levels we have seen from him earlier in the year.

With the Bankies losing a bit of their defensive discipline, Pollok carved out another chance just after the half hour. A great cross-field pass found Fraser on the left wing, and he took care of Adam Hodge before coming infield onto his right foot and curling a shot towards the right hand corner of the goal. However, Donnelly was there again with a second top drawer save tipping the ball out for a corner.

The Bankies looked like they needed half time to regroup, and the injury to Slattery didn’t help matters. This injury was probably the telling moment as Clydebank never really gained any control of the game after that, however had they scored their best opportunity of the match just minutes after the restart then it could have been a different game.

The ball was played out wide to Gallacher on the right wing just four minutes into the second period. He made light work of the defender and hit a great shot across Longmuir, who spilled it straight to Mulcahy. With an empty goal in front of him from just six yards, he somehow missed the target completely.

This was the Bankies last good chance of the match, as Pollok controlled possession thereafter. The intensity levels dropped dramatically as both sides had a weary look about them, though it looked more of a struggle for the Bankies to keep it going.

Pollok didn’t really create an awful lot, though substitute Krol was giving Hodge a bit of a hard time with his pace down the left flank. Pollok had a couple of near things before they got the winner. Lyon waltzed past McGonigle before hitting a near post shot which Donnelly beat away. Then, Lyon again gave McHugh the slip on the right hand touchline and he drew the ball back for Fraser. From a good position in the middle of the box he mis-kicked and the ball bobbled into the arms of Donnelly.

The goal finally came after 79 minutes. A needless free kick was given away by Black, I believe. Pollok’s deliveries into the box had been quite good all night and this in-swinger was met by the in-rushing McCann whose header went in the top corner of the goal.

The Bankies didn’t look like they had it in them to mount any kind of comeback, and despite throwing a number of bodies forward Pollok saw time out comfortably.

So that’s it for another season. This was Gordon Moffat’s first real full season in charge and he along with his coaching staff of Gary McMenamin, Kirk Forbes and Drew Marshall have done a grand job. They have taken the club to a fourth placed finish which has not been achieved since Moffat was a player at the club himself. The Scottish Cup run will live long in the memory, coming so close to knocking out three SPFL clubs and firmly putting the club back onto the footballing map of Scotland. There have been a few moans along the way, but by and large all the arrows are pointing up the way.

With a dozen or so players re-signed for next season there is probably room for another half dozen new bodies. The wishlist includes a few more goals upfront, and a bit more steel in the middle of the park and we won’t be too far away again. I’m sure the manager is already on it!