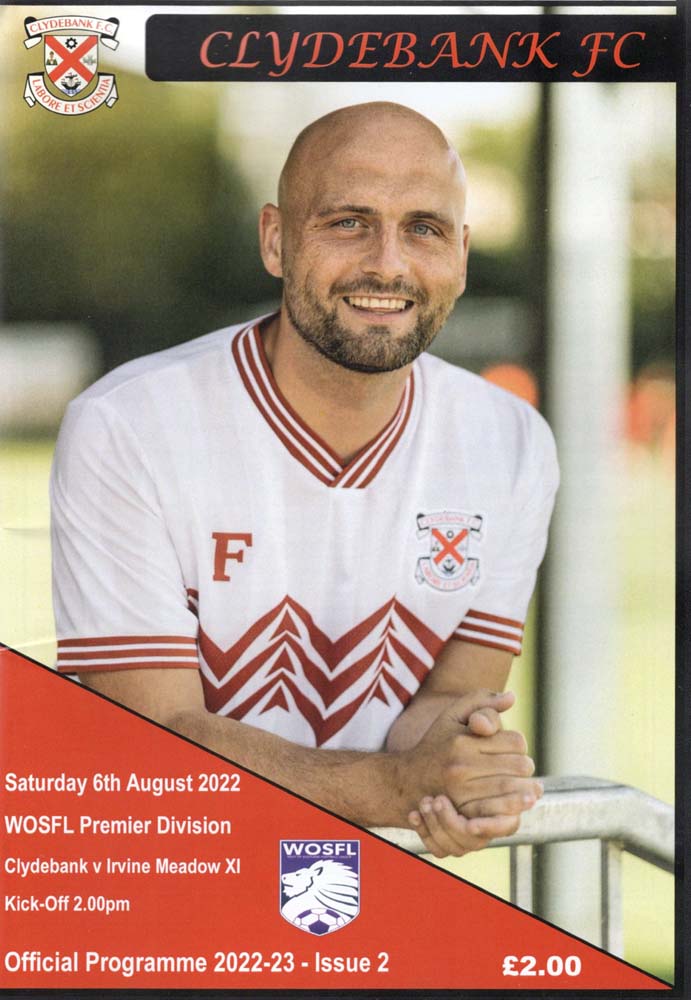 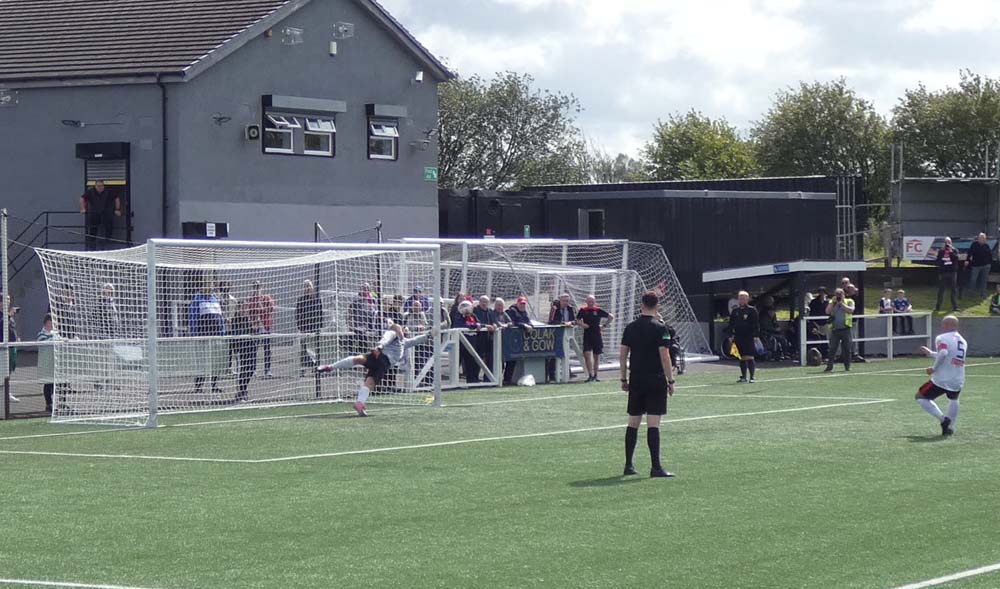 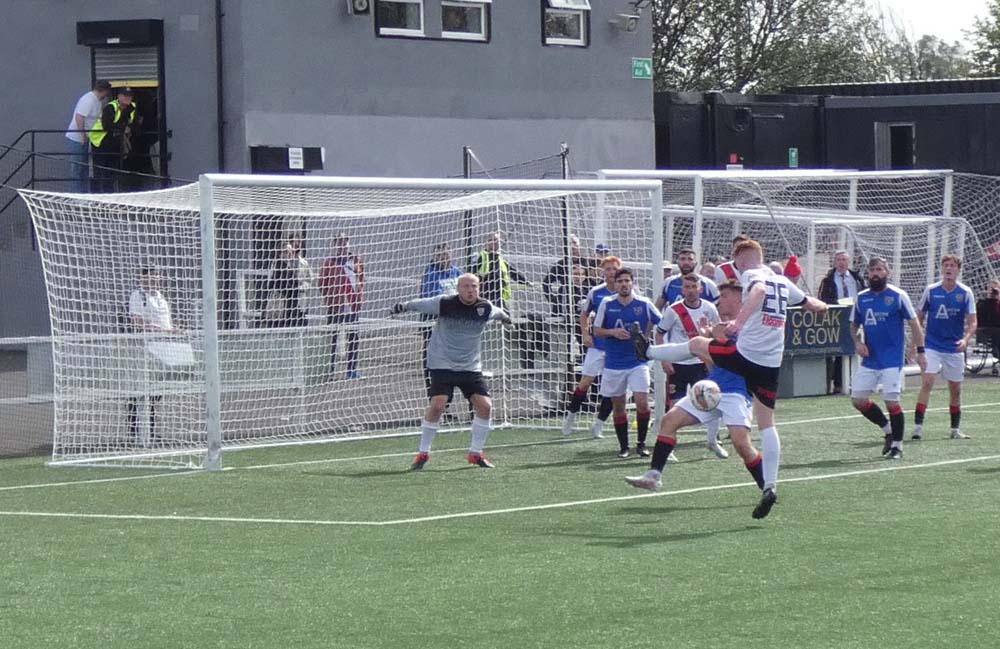 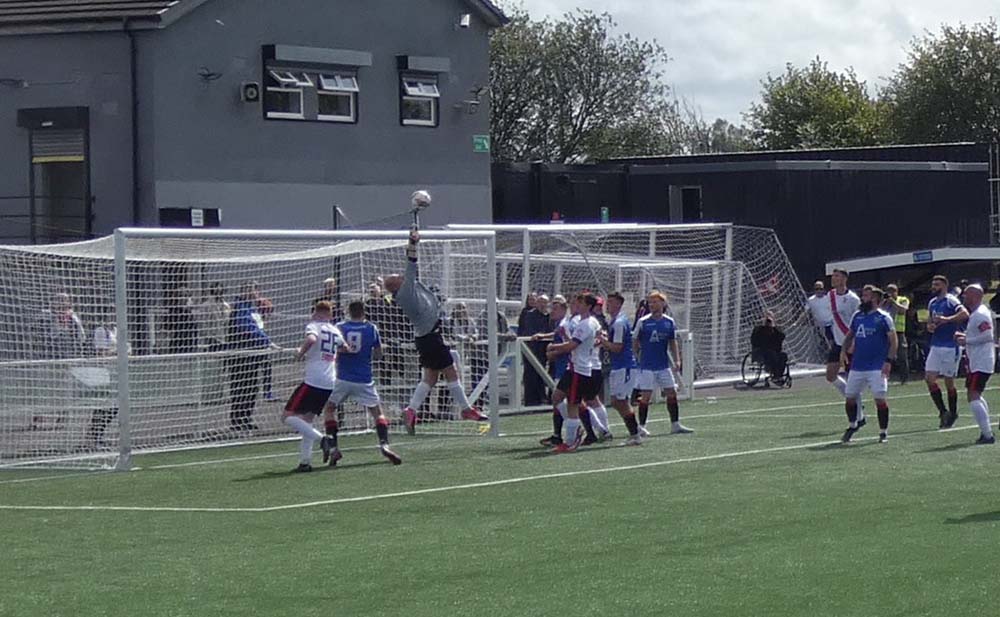 Clydebank almost staged a second half comeback against Irvine Meadow in this opening home match of the league campaign at Holm Park losing in the end by three goals to two after being three down at the interval.

It would not be an overstatement to say that the first half performance was the single worst since Gordon Moffat took charge of the club. It wasn’t just the individual mistakes that cost all three of the goals, but the lack of any coherent build up play, the constant giving the ball away, and the general lack of desire which the opposition showed in spades.

In truth, had Meadow scored another couple of goals before half time, no one could have complained. It seemed oddly strange that the management didn’t take a more pro-active stance and make a change to the disaster that was unfolding before our eyes during that first period, especially after the second goal. A third would have made the second half task almost impossible and with the side ploughing on regardless the visitors duly scored it.

It was even more of a surprise when the same eleven took to the field for the second half, though in fairness they made a better fist of it.

After last week’s win at Arthurlie, Moffat promoted the three substitutes – Mulcahy, Kelly, and McGonigle - who positively affected the game with starting slots, and handed a debut to East Kilbride loanee Aiden McDonald for the absent Oisin McHugh.

As has been the way recently, Clydebank started the game on the front foot forcing a couple of corners. A goal was almost forthcoming in the 5th minute when Mulcahy sent in a great back post cross which Kelly volley narrowly past.

After that initial spell, the game settled down to a one way procession towards the Clydebank goal. All the threat was coming down Clydebank’s right side, as Hodge had possibly his worst game in Bankies colours.

After 10 minutes, Boyd cut inside Hodge, but dribbled a shot that didn’t trouble Donnelly. Then the same player was allowed to get to the byeline and hit a low cross which Graham couldn’t steer on target simply because the pass had just too much power on it.

It wasn’t long before another break on the left, saw the Bankies have their luckiest escape yet when Graham burst through and tried an unorthodox shot with his right foot. Fortunately the ball hit the inside of the post and Donnelly recovered the ball.

It was no surprise when the opener came after 25 minutes, and it came directly from Hodge passing the ball straight to Boubekri. The forward drove into the empty space and crossed into the box. It was a double disaster as Donnelly fumbled the ball, and it dropped straight at Graham’s feet for the easiest of tap-ins.

Just three minutes later and the lead was doubled and it was another shocker. Matt Niven stood on the ball in the middle of his own half and it broke to the opposition. The ball was immediately fed to Graham who poked it beyond Donnelly.

The Bankies were all over the place at this point, as there seemed to be huge gaps for the Meadow players to run into. Ramsay should have scored the third when he was sent clean through, but Donnelly made a great stop redeeming his earlier mistake.

It didn’t look like the Bankies were going to make it to the interval - and giving themselves a chance to regroup - without losing another goal and so it proved. Jamie Darroch’s Achilles heel made an appearance when he was left one on one with Graham. A ball over the top saw the striker easily stride away from the Bankies captain and slot the ball home.

With no changes made at the break, it wasn’t clear how these same players were going to get themselves back into the game. However, they started brightly once again forcing a few corners one of which resulted in McGonigle shooting a foot over the bar from a half clearance.

Meadow were happier to try and pick the Bankies off, and almost did so after 50 minutes when Graham was clear on goal again, but his fourth goal was prevented with a routine save from Donnelly.

The Bankies earned a lifeline when they were awarded a penalty after 54 minutes. A fine through ball saw Kelly up-ended by Waters as he tried to take the ball round the keeper. Jamie Darroch took the kick and powerfully guided it into the net.

For a period afterwards, Meadow were a bit rattled and a second goal at this stage could have put the cat among the pigeons. However, the goal never came.

Lee Gallacher forced a fantastic save by Waters at his near post, then Ciaran Mulcahy was out of luck as his volley cannoned of the crossbar.

The Bankies finally made some changes just after the hour, and whilst holding the upper hand now, the game was mainly being played in the middle third.

There was a re-doubling of efforts in the last ten minutes, and a second goal was finally scored with just over five minutes remaining. Prior to the goal, Waters made an outstanding one handed save from a first time Higgins rocket following a through ball from Gallacher.

The goal just after was a fine finish from Josh Weir. He looked like he might have touched the ball too far away from his self, but he stretched and slashed the ball into the net from ten yards.

There was to be no fairy tale as Meadow successfully ran down the clock in the most cynical way possible, but that’s what happens when you give the other side three goals of a start.

There was a bit of booing today from the terraces, particularly at half time, which we haven’t heard before during Moffat’s tenure. You can’t legislate for individual mistakes that sometimes happen, but the first half was a mile off from where we need to be.

I'm not saying it was responsible for the score today, but I had a couple of issues with the line up today. I think Lee Gallacher is wasted in the middle of the park. The hustle and bustle in that area just seems to make the game pass him by. He is so creative in the wide position and we had nothing from these areas today. I would have rather saw us play two up front instead. We now have three strikers in the squad, and there is a case for that other than what we did. Nicky Little returning next week should resolve that however.

We also seem to have given ourselves a self inflicted wound at left back. We had a pretty solid, reliable full back who went to today’s opposition and did a decent job for them. He might not have been the answer long term but we are definitely now much weaker in that position as things stand.

Next week there is a difficult trip to Portland Park to face Troon. The Seasiders look to be in good form, so we can’t afford to see a repeat of today’s performance.