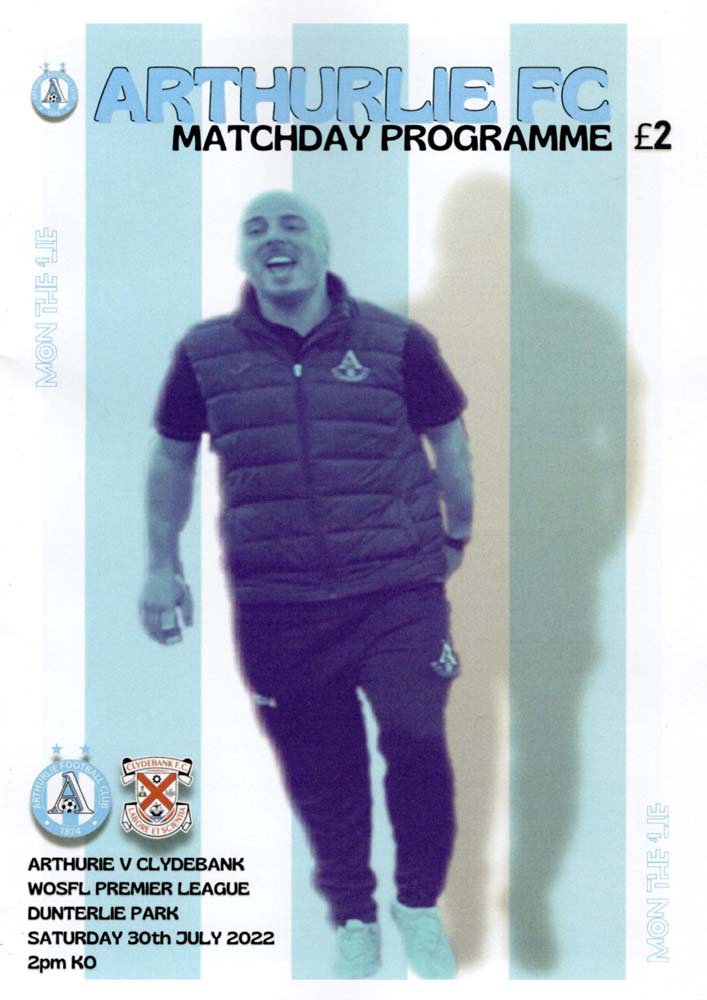 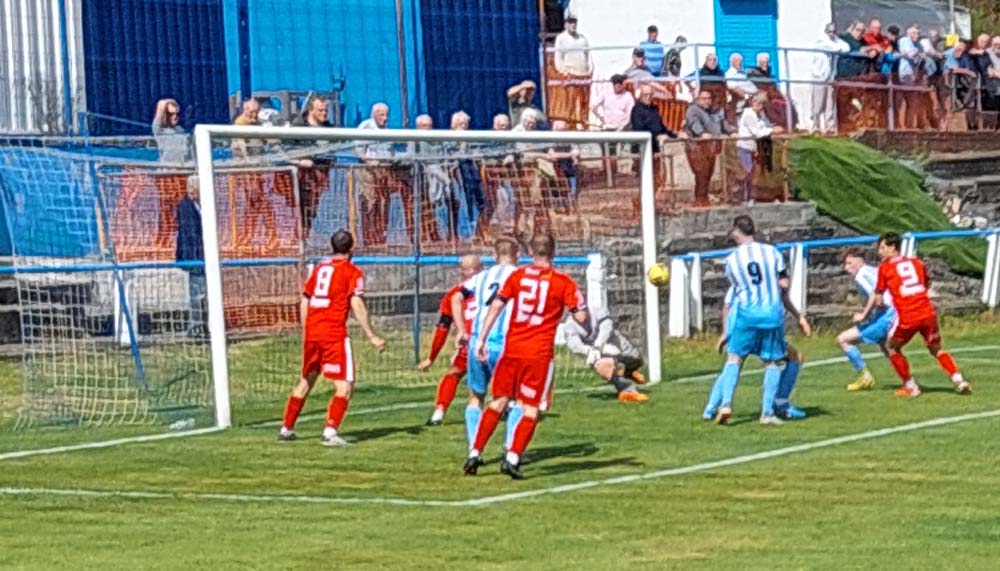 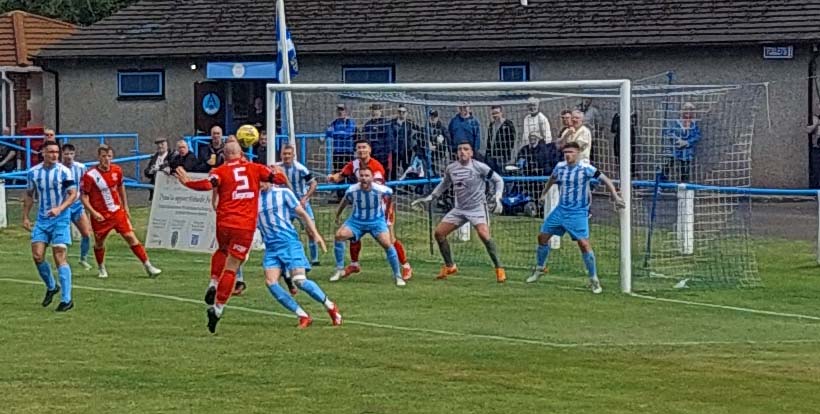 Clydebank got the competitive season off to a fine start with a well deserved 3-1 victory over promoted Arthurlie at Dunterlie Park in a very well attended match. The Bankies travelling contingent was very impressive making up a fair proportion of the crowd.

Facing a promoted side on the first day of the season away from home is hard enough, never mind one who hadn't lost a single league game all of last season. However, the Bankies subdued the home side’s early enthusiasm and ran out clear winners in the end, mainly thanks to Gordon Moffat’s triple substitution on the hour.

The contributions of Kelly, McGonigle and particularly Ciaran Mulcahy were the vital factor in gaining the three points with the latter two also getting on the scoresheet.

It is always interesting to see how the team will line up at the start of a new season, but with Little, McMahon and Green all suspended then maybe Moffat was a little constrained as to the side he may have had in mind. Weir and Higgins were both given debuts whilst McGonigle and Mulcahy had to settle for spots on the bench.

As expected, the game kicked off at a frantic pace and Arthurlie should have taken the lead after just two minutes. A cross from the right deflected straight into the path of Simeon. Had he been blessed with a left foot a goal would surely have been scored, but he went for an awkward right foot type of thing and missed the target completely.

The Bankies first real shot at goal came after ten minutes when a Higgins effort was blocked, and the ball spun out to the unmarked Lee Gallacher. He tried to curl the ball into the keeper’s bottom right corner, but he made a remarkable fingertip save for a corner.

For the most part, the Bankies were the better side in terms of territory, and during the game racked up an incredible number of corner kicks, but nothing was to come from any of them much to the frustration of the bench.

The Bankies dominated the middle part of the first half, but were struggling to get past the home defence. On 20 minutes, Gallacher sent a lovely through pass to Higgins, but he maybe took a step too many allowing Shields to get a blocking tackle in.

Arthurlie were getting these challenges in well, and twice Weir had shots that were charged down, leading to more fruitless corners.

The ‘Lie had a reasonable chance when a ball over the top saw a collision between Donnelly and MacNeil. The Bankies keeper won the race, but the ball spun out wide to Simeon. It was a difficult, but scoreable opportunity from a tight angle, but he blasted the ball way off target.

The half was extended to 51 minutes after MacNeil suffered a head knock and subsequently had to retire from the match. The Bankies almost capitalised on this extra time, when a solid near post header from McKinley just failed to find the target.

On the resumption, the Bankies were kicking up the hill, and were taking a stronger grip on the game as time wore on. However, the opening fifteen minutes hardly brought a shot on goal and it was evident that a spark was needed from somewhere.

Gordon Moffat brought that spark with a triple substitution. Taking advantage of the new five man substitution rule, he allowed himself to make a bold change replacing the front line almost entirely with Weir, Higgins and McKinlay making way for Mulcahy, Kelly, and McGonigle. The result was almost instantaneous.

A Lee Gallacher free kick from the right was met by Mulcahy, but Black reacted quickly to block the ball on the line. Fortunately, the ball spun up to head height, and from no more than a few feet Mulcahy nodded home.

The Bankies were well in control now as Arthurlie started to look weary in the legs, however a one goal lead is always a precarious situation, and it proved to be.

With just fifteen minutes remaining, Hodge cleared poorly, and the ball was picked up by Aaron Healey. The winger mazed his way cross field from left to right. As he turned back on himself in the box, he lost his footing under the challenge from Slattery. The ref pointed to the spot for what looked to be a fairly soft penalty. Gary Carroll executed the spot kick by sending the ball down the middle out of reach of the diving Donnelly.

One of the most pleasing aspects of this game was the Bankies response to losing this goal with not a lot of time left on the clock. Within five minutes the Bankies scored twice and sealed the three points.

Just minutes after the equaliser, the lead was restored. A long free kick just to the left of the goal saw an Arthurlie defender all at sea as Mulcahy ran round his blind side and nodded the ball back across goal for Matt Niven to prod in from close range.

The other two substitutes were involved in the third just a couple more minutes on. Alan Kelly has a considerable amount of skill in his locker, and he used it to full effect skinning the home full back and driving the ball across the goal for the unmarked Liam McGonigle at the back post to first time high into the rigging giving Black no chance.

Arthurlie looked short on ideas, and started to throw in some reckless tackles. They were lucky not to have a man sent off, though manager Palmer did see red. They are a team used to winning and maybe this was a reality check for them. It is not difficult to see why they seem to have stuck with much of the squad from last season who won their conference division. However, the Premier League is a considerable step up in quality and they will have to adapt quickly.

As for the Bankies, well you couldn’t have asked for more. Pre-season may have cast some doubts, but the players stepped up today. I think most would have been happy with a narrow victory in a difficult fixture, but this exceeded those expectations and then some.

The three substitutions were vital. Ciaran Mulcahy may have been disappointed not to have started, but on that showing it will be difficult to keep him out of the side. It was also good to see Frazer Johnstone play in the manner that he did when he first joined the club. He has a wee bit more competition in his area of the field and this will hopefully bring out the best in him. Finally, I thought Jamie Darroch was outstanding. No offence to Nicky Little but this guy is the real leader of that team. He is the voice in the side, and his organisation is just top notch for this level of football.

Next week the Bankies host their first league game of the season with Irvine Meadow being the visitors. Meadow had a bad result at home today, and this may be due to the huge amount of close season signings they have made. Clydebank will be looking to improve on last season’s poor home form and will hopefully start as they mean to go on.