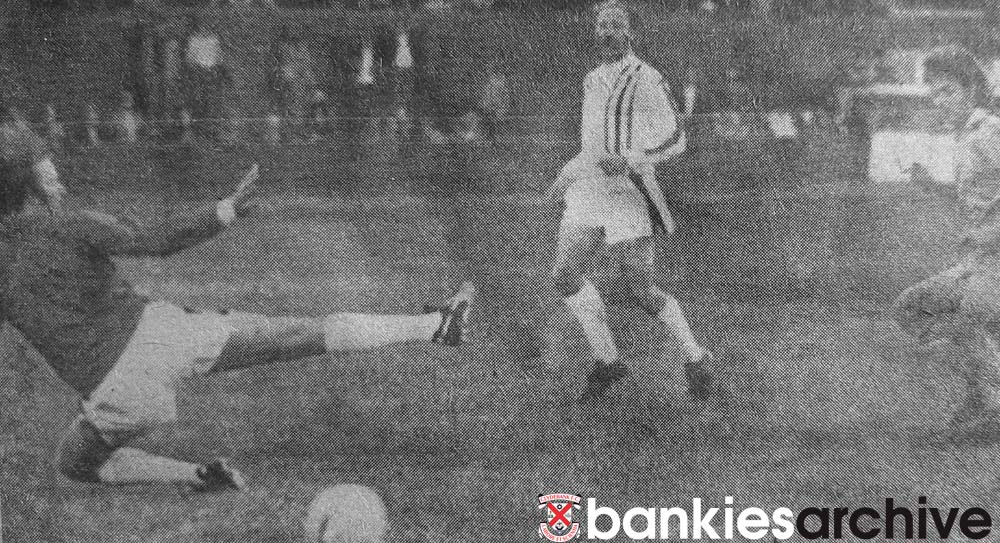 An amazing half-hour surge of power by Thistle gave them a flattering three goal lead at the half way stage of the tie.

The leeway was not at all deserved for Clydebank had been far and away the better side in the opening half when only a mixture of bad fortune and heroics by Alan Rough prevented them from turning round two or three goals to the good.

After a nervous start by both sides Bankies were first to settle with O’Brien showing some deft touches out on the right flank.

Indeed it was O'Brien, who set up the first chance of the match for Mike Larnach whose spontaneous shot from, 12 yards was superbly palmed way by Rough.

Then it was Jim Gallacher's turn to show off when he flew through the air to tum away a curling Gibson free kick. The rebound came to Thistle's top man Houston who shot harmlessly wide.

In the 36th minute Rough again came to Thistle's rescue and again it was Mike Larnach who provided the reasoning. He was sent through by Lumsden but the shot was too near the Scotland keeper.

Five, minutes before the interval Joe McCallan gave an object of how not to score with a simple header. Larnach head flicked the ball across goal and Joe was unmarked in the middle, but he nodded with the ball straight into Rough’s arms. Nine times out of 10 he would have scored.

On the half-time whistle Gallacher had to dive at Somner's feet when the big striker was put through after a Houston run.

Thistle were a completely changed side after the interval and Clydebank looked a trifle jaded, although they still pieced together some enthralling moves, most of which stemmed from Lumsden.

Thistle went ahead in the 51st minute when Norrie Hall kneed the ball into his own net after Melrose had shot aimlessly. Norrie was blameless.

They went two up in the 70th minute with a fine Gibson goal. He picked up the ball outside the area, ambled past McLachlan and Abel and poked the ball past Gallacher.

One sensed that Clydebank could contend with a two goal deficit for Kilbowie but any more and things would become well-nigh impossible.

But alas, a third goal did come when nine minutes before time Melrose finished off an untidy move.
---
Report 2
-----------
A combination of determination and drive took Thistle through the first leg of this Anglo-Scottish Cup tie at Firhill with a comfortable lead, but they left both qualities in the dressing room until after the interval when they scored all their goals and generally overwhelmed Clydebank.

Perhaps it took them some time to get accustomed to the pale-blue shirts they sported for the night. Certainly in the first half they played like the strangers they looked and Clydebank should have punished them.

The Kilbowie team had three great chances to spoil Firhill's seasonal opening. In 28 minutes Rough had a smart save from Larnach, who was again clean through seven minutes later. This time Rough came out to block his shot with a foot. And in 39 minutes McCallan headed straight into the keeper's arms when it seemed easier to score.

Thistle accepted these lapses gratefully and in the second half hit Clydebank hard. Ian Gibson was their biggest asset. He was involved in all three goals. The first came in 51 minutes when his cross was half hit towards goal by Melrose, cannoned off the Clydebank full back, Norrie Hall, and went past Gallagher.

Eighteen minutes later Gibson scored a second, winning the ball inside the box, rounding a defender, and shooting past the 'keeper. With nine minutes left he was back in action again, hitting a shot which was blocked but broke to Melrose, who lobbed it over Gallagher and into the net.
-
Report 3
-----------
Partick Thistle staged a not unfamiliar Jekyll and Hyde act to take a comfortable lead in their Anglo-Scottish Cup-tie.

At Firhill last night, the Jags staggered and stumbled in a depressing first-half.

Clydebank, however, were cool and played polished football, their neat moves inspired mainly by the brainy Gerry O'Brien.

Indeed if it hadn't been for Alan Rough and bad luck near goal, the new Premier League babes would have turned round at the break well ahead.

But what a difference in the second-half! Here was a new Thistle and, their fans hoped, the real Thistle.

They surged ferociously into attack and gave Bankies a lesson in the art of goal-snatching.

Certainly, Thistle in the second-half looked a competent side indeed.

Nevertheless, Clydebank were out of luck. Take the first goal for instance. A shrewd cross from Ian Gibson seemed to have been lost when Jim Melrose could only half control the ball. But it cannoned off poor Norrie Hall to give Thistle the lead they wanted.

There was nothing flukey, however, about Thistle's second goal - a piece of artistry by the tall Ian Gibson, who was in splendid form. He walked casually past two opponents before slipping the ball into the net.

Gibson also had a hand in the third goal scored by Jim Melrose. It was a strange game. The first-half held yawns but the second session was amazing. (***It seems like this reporter can't hide his bias)

It became rugged and Lumsden and Love were booked.