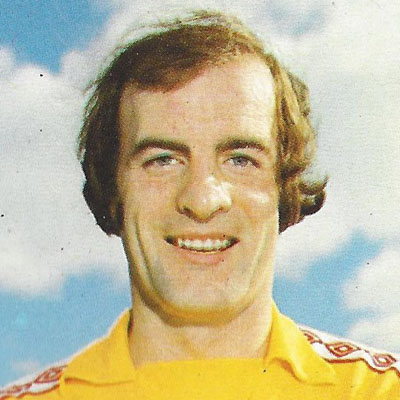 Clydebank have only ever had a handful of players whose names become synonymous with the club. The top two in that very short list are Jim Fallon and the subject of today’s former Bankie and that is legendary goalkeeper, Jim Gallacher. The refrain of “Easy the Gal” echoed around Kilbowie Park for over 20 years, 739 appearances and 187 clean sheets.

Jim’s story starts in 1969, when as a 17 year old he was playing for the Clydebank Boys Guild, he was scouted by Arbroath. He met Red Lichties manager Albert Henderson at Glasgow Central Station to sign for the club.

In his first two seasons at Gayfield, Jim made only a handful of first team appearances, one of which was in a 4-1 defeat by Clydebank at Kilbowie. In what seems like a strange moment now, The Bankies were awarded a penalty and the man to take the spot kick was the other player who was to become a legend for the club, Jim Fallon. On this occasion, Fallon was the winner, though Gal did get a hand to the ball

By 1971-72 Jim was mostly first choice in Arbroath’s promotion winning season, but dreams of top flight football turned sour as he was given a surprise free transfer by the club.

Back in his native Clydebank, Jim started the season playing for local amateur side Municipal. Up at Kilbowie, The Bankies had sold Mike McDonald to Stoke City and were looking for a replacement. Several keepers were tried and were not up to scratch, when ex-referee Gibby Bowman who ran the shop in Whitecrook Street spotted Jim playing for the amateurs.

Bowman alerted Jack Steedman, and after one trial match, terms were offered and accepted immediately. Jim made his debut on the 25th November 1972 in a 2-1 defeat against Queens Park, with his first clean sheet coming a few weeks later in a goalless draw at Brechin.

Just as Jim was establishing himself in the side he broke his toe, leading the club to sign namesake Gerry Gallacher from East Stirlingshire. However, it was clear that Jim was the superior keeper and he was immediately reinstated upon regaining his fitness. By the end of his first season Jim had 16 appearances for the club under his belt.

The next two seasons saw Jack Steedman hand over the managerial reins to Bill Munro and assemble the greatest ever Clydebank side. Jim Gallacher, and his defence of Abel, Hall, Fallon and Fanning were in place and by 1975-76 Clydebank were installed as the bookies favourites for the new Second Division championship.

It was to be one of Clydebank’s best ever seasons, but one of the worst for Jim. In just the second match of the season Jim was injured against Berwick Rangers, and was replaced by Northern Ireland International Roddy McKenzie. Such was McKenzie’s form including a run of nine clean sheets in ten games that Jim was unable to get back in the team.

It was New Year before Jim got a taste of action. However, his appearance at Cowdenbeath was his sole league start. Clydebank duly won the league title, but Jim missed out on a medal in the only major honour the Bankies were to win. The Bankies were also to reach the final of the ill-fated Spring Cup that year, and Jim had been alternating in goal with McKenzie up to the quarter final stage. Munro chose McKenzie for the latter stages and Jim was to miss out on a medal again as the Bankies were defeated 4-2 by Airdrie in the final.

Despite this setback in his career, Jim was about to show what he was made of. With little fanfare he was returned to the starting eleven at the start of the 1976-77 season. Once again, Gal suffered an early season injury missing four matches, but this time he displaced McKenzie immediately.

Jim would recall this year as one of the greatest in his career, as the Bankies were promoted to the Premier League beating a much higher standard of opposition. In the Autumn Jim kept six clean sheets in a row, and ran that total up to a career best of 18 for the season, however it was the four match saga against Rangers in the League Cup Quarter final that would show Gal at his finest.

Davie Cooper inspired the Bankies to a 4-4 aggregate score over two legs, and the replay was to be played at Ibrox giving the Light Blues all the advantage. This was to be Gal’s night with the scores locked at nil-nil, rangers were awarded a penalty after an hour. Alex Miller was shocked to see Jim dive full length to stop the ball on the line to make sure the Bankies earned a second replay. Rangers manager Jock Wallace described Gal’s performance that night as ”heart-breaking.”

Rangers won through in the end, but Clydebank’s momentum towards promotion was unstoppable. Jim gave up his job in the local cash and carry to go full-time joining most of the squad who had already made that jump.

Promotion was won at Dens Park, as the Bankies raced into a three goal lead, against rivals Dundee only to be pegged back to 3-2. Jim had the game of his life with the newspapers reporting that the league should strike Jim a special promotion medal of his own such were his heroics. So much so, that fans and players of both sides gave the keeper an ovation as he left the field. Thanks to Jim, the Bankies prevailed and promotion to the Premier League was achieved.

Clydebank had entered the Premier League for the first time in 1977, and were immediately handicapped by the sale of Davie Cooper to Rangers. This led to the departure of Rikki Agnew from the boardroom meaning the rise of the club would no longer be unsustainable.

Jim had quite possibly his busiest ever season as the Bankies struggled to make an impression at the top level. It took the club eight games to register a victory, and they ended up with only six all season finishing bottom of the table.

For Jim, It meant recognition in the national newspapers and receiving many plaudits for his talents. Jim himself cited the match against Rangers in February as one of his greatest. Despite losing 1-0 to a late Derek Johnstone goal at Ibrox, Jim excelled to the point where Rangers boss Jock Wallace described his performance as world class, and Bill Munro described him as the best goalkeeper in Scotland.

The relegation signalled a return to part time football, and back to a job outside the game for Jim. It might seem strange at this point that Jim never got the move to a bigger club. Jim was never a contract rebel, as was common at Kilbowie amongst ambitious players in the 70s and 80s. He always renewed his contract without any fuss and just let any transfer speculation be just that. All this was to Clydebank’s benefit.

There were repeated noises about Jim being included in the Scotland National Team squad. The oft repeated quote from Jock Stein that Gallacher was “the best uncapped keeper in Scotland” but his position with a part-time club made such a possibility just a pipe dream.

Jim did receive international recognition, however, by representing Scotland in the Summer Semi-pro championships. Scotland and England were joined by other European nations in the tournament that ran from the late 70s to mid-80s. Many future top Scots were in the squad including the likes of Ally McCoist and Maurice Johnson.

The Bankies usually had a decent contingent in the squad, and Gallacher was the keeper when Scotland won the tournament in 1980 and 1982. The 1982 victory was secured at Pittodrie following a 1-1 draw against England with fellow Bankie Jim Fallon notching Scotland’s goal.

Jim also received a couple of winner medals in Clydebank colurs during this period as the Bankies won the Stirlingshire Cup in successive seasons in 1979 and 80.

After several near misses, Clydebank returned to the Premier League in 1985. Jim was now 34 years of age and was at the top of his game. It was an unusually defensive Clydebank side who played with five at the back, and Jim kept an impressive 15 clean sheets during the season, losing less than a goal per game.

This time the Premier League was taken with a dose of reality as the club remained part-time. Once again, despite an impressive start, the Bankies finished bottom of the pile. A victory over Rangers gave Jim the double over the Old Firm in his career which would be of scant consolation as relegation seemed certain.

However, the Bankies were given a reprieve as League reconstruction meant another year in the top flight. With money flushing through the Scottish Game due to a resurgent Rangers side, the Bankies were up against it in a mammoth 44 game league season.

Jim recalls this season as one of the most disappointing in his career. The Bankies were sitting just outside the relegation zone ahead of Falkirk, but a shock was in store as the Bairns defeated Celtic at Parkhead giving the Brockville side the advantage. Clydebank still had opportunities to save themselves, but they couldn’t convert a number of draws into wins and were relegated.

The Bankies would be a First Division side for the rest of Jim’s career and despite a few near misses top flight football would never return to Kilbowie. Jim continued to be amongst the most respected players in the Scottish game and he would find most of his later career successes in Cup football.

The 1988 Scottish Cup win at Love Street would always be one of Jim’s favourite games. The Saints were the holders of the cup, but the Bankies were magnificent on the day and two goals from the newly signed Ken Eadie and a clean sheet from Jim meant a stunning 3-0 victory. 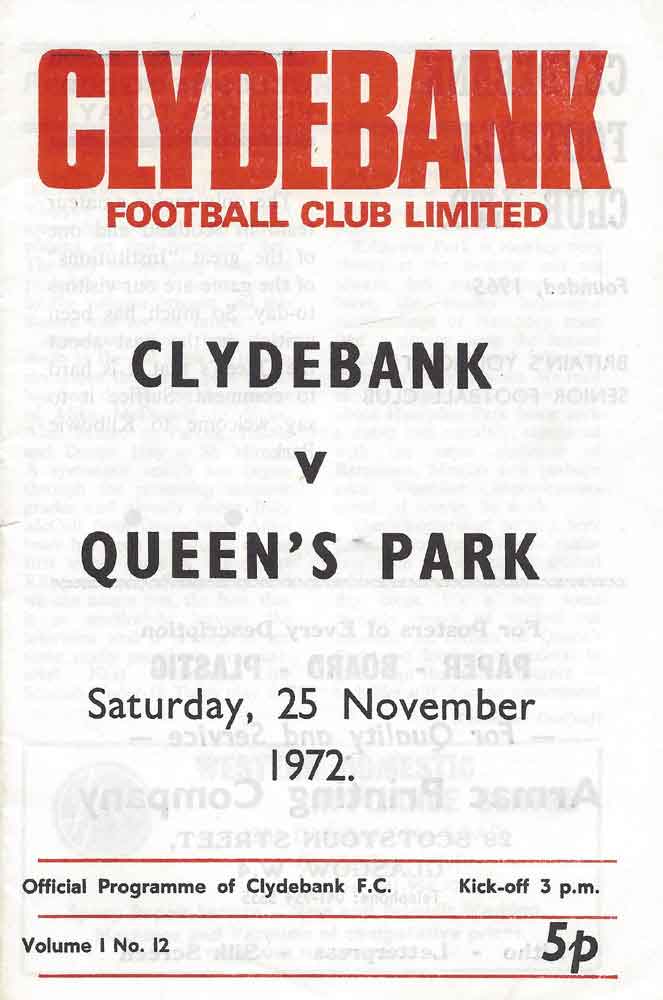