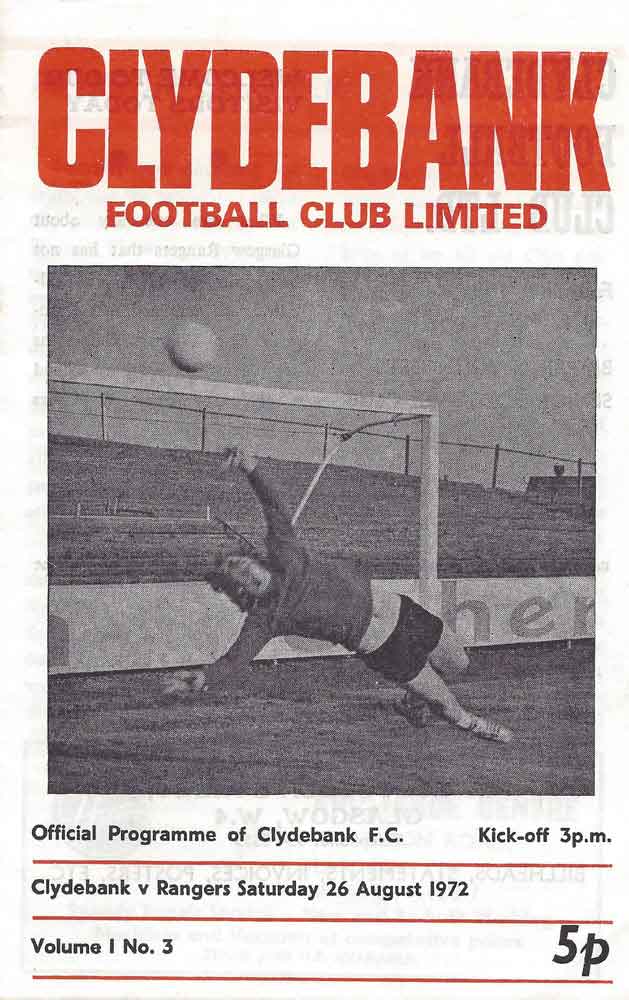 Two 5-0 defeats in a row have rounded off the Bankies participation in the League Cup for the season. Their strong position holding up the rest of Section Three, is in sharp contrast to last year’s when they qualified for the latter stages of the competition, meeting Celtic in home and away ties.

By coincidence, the other half of the Old Firm won 5-0 at Kilbowie in their match. You can draw your own conclusions about that

Despite the apathy in the interest shown in this match highlighted by the disappointing ticket sales, it turned out to be quite enjoyable, providing of course you were not sporting a red, white and black scarf.

Although the Bankies tried hard at times, the power and skill of this determined Rangers side was just too much for them. But give Clydebank their credit. Even when down 5-0 and on the wrong end of relentless pressure, they never once resorted to dirty or unfair play to stop Rangers. They took their defeat like gentlemen.

The whole game was played in a very friendly atmosphere and only two Incidents come to mind which threatened to spoil the amiable relationship between the sides.

Colin Stein took a verbal dressing down from Dougie Hay after something the Rangers' centre did annoyed the Clydebank number six. That was it. It was over as fast as it had started and the game went on. I wonder what Dougie said.

Incident number two came after Bobby Love and Billy Mathieson went down after a tackle in a tangle of arms and legs. Both players were a bit narked at this and squared up to one another ready to have a go when they realised the innocence of the incident and walked away, arms round one another apologetically, the best of friends.

If I tend to get a bit repetitive about the brilliance of Mike McDonald, I make no apologies, Facts are facts and the facts are once more that McDonald had not been in such brilliant form on Saturday the scoreline would have gone into double figures.

If you don't believe me ask Scotland team boss Tommy Docherty who was watching the goalie for the second week running with a view to placing him in the Under-23 pool.

Joining McDonald in the honours were Pat Delaney, Jim Fallon, Dougie Hay and Mike Larnach, Delaney and Fallon (before his injury) were immense in the air and on the ground. Their sound defensive work was a treat to watch. When Fallon was taken off injured Hay moved back to the centre-back position with Delaney and took over where Fallon left off. He had looked unhappy in his midfield beat but when he fell to the back he never put a foot wrong.

Mike Larnach, the 19-year-old, making only his third appearance this season, started off shakily-not surprisingly. But as the game progressed he found a confidence which made one heck of a difference and at the latter stages of the game he was taking on and beating Rangers defenders at will.

One time, he not only took the ball neatly past Dave Smith but just to rub it in swerved brilliantly past the tackling figure of Mathieson. He is definitely one to watch in the future. All too often he was fighting a losing battle. He had little or no support from the rest of the forwards.

Great things were expected from Jimmy Caskie but I'm afraid he had one of his quieter matches,

Andy Roxburgh had a great chance to put the Bankies into the lead in the 7th minute when he found himself with the ball at his feet about five yards from the Rangers goal but his shot was well wide of the target.

The first sign we had that McDonald was once again on top form came in the 13th minute when Ibrox skipper John Greig stormed up the left wing and from an acute angle thundered in a screaming shot which was going in all the way. . . until McDonald miraculously turned the ball round the post for a corner.

Greig had better fortunes seven minutes later, however, when he did score. Stein sent the ball inside to Greig who then played a one-two with Fyfe before knocking the ball past the helpless McDonald

Three minutes later the light blues went two up. Gregor Abel tackled Tommy McLean just inside the box but unfortunately used a hand to knock the ball away from the winger's feet. The referee had no hesitation in awarding the penalty and McLean took the kick sending it just inside the post with a low shot. That was how the score stood at half-time.

The second half was only a couple of minutes old when Fallon had to be substituted after an apparent recurrence of a toe injury. Jim McPaul came on, moving to midfield, while Dougie Hay moved back.

Rangers were really giving the home goal a pasting. An idea of the pressure they put on is given by the fact that their third goal was scored by sweeper Dave Smith.

Smith intercepted a loose Clydebank pass in midfield, strode forward with the ball, and passed it to Stein. He sent it forward to McLean whose centre was picked up by Smith and he cracked the ball into the corner of the net.

Three minutes later Fyfe should have scored number four when he took a rebound from McDonald but sent the ball past the post. As it was, Derek Johnstone was left all on his own by the Clydebank defence and had the easiest of tasks in slamming home a McLean cross for number four.

Five minutes from the final whistle Rangers finished the scoring when Stein neatly head-flicked a McLean cross into the net with McDonald, for once, looking flat-footed.