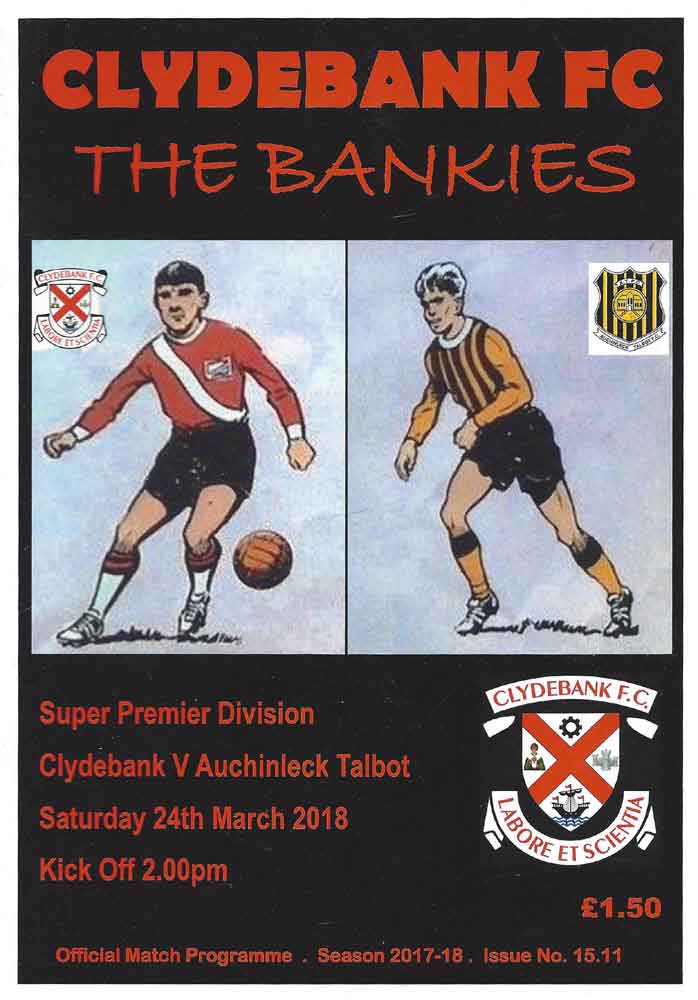 Where to start with this match? Let's get what the outcome means for Clydebank out of the way first. By defeating Auchinleck Talbot by three goals to one the Bankies jump up another league position to 9th, and must fancy themselves now to avoid the relegation play off positions all together. For Talbot, this may well be the blow that puts paid to their title aspirations for this season.

Coming into this match the Bankies have looked a lot stronger with the new signings, but it is always a tall order against Auchinleck. Winners of the Ayrshire Sectional League Cup, into another Scottish Cup Semi Final, second top of the league and won all six of their matches since the turn of the year show the size of the task that Talbot present.

The first half of this match seemed to bear this out as Auchinleck could easily have been four up. The Bankies were all over the place, offering no attacking threat, desperate defending and scenes of pandemonium in our penalty box at every turn. To be only one down at the break was a bit of a relief, a goal that came after only seven minutes from Hyslop who nodded the ball into the net at the back post.

The second half was a completely different story. Talbot did come out strongly to try and kill the match off early on, but a quick goal by Steven Higgins changed everything after 50 minutes. The new signing from Lesmahagow cut inside from the left hand side and curled an absolute beauty into the far top corner from around 20 yards out. This was the first of three top quality goals.

The second came five minutes later courtesy of Ryan Deas whose performances have vastly improved recently. Bursting forward he beat a Talbot defender in the way that makes you chuckle because he just outfoxed him so brilliantly. Still twenty five yards out, he struck a rasping shot low into the bottom corner of the net that Leishman could only wave at on its way past him.

Another five minutes brought goal number three. Sent down the inside left channel, Higgins had both a defender and the goalkeeper bearing down on him. Thinking quickly, he lifted the ball over the top of Leishman with the outside of his right foot. The big keeper could only look on as the ball took one bounce and crossed the line into the goal.

Talbot were still a force coming forward, but as desperate as Clydebank's defending was in the first half, so was the visitors attacking in the second period. The build up play was excellent, but the final effort was usually wayward, or well defended by the Bankies. It was interesting to see a Talbot side wane under the pressure. Already seven points behind Kilwinning before this match, Auchinleck simply have to keep winning to have any chance of the title. The desperation to get back into this match was leaving huge gaps in the defence, and had the Bankies been a bit more canny then they could have added more goals.

This was a great win for the Bankies. I don't think anyone would have given us a chance before the game started. The three points are massive, and really puts the pressure on the clubs below, especially as two of them, Arthurlie and Girvan both lost today. There were several notable players in the team today. Higgins for his two goals, making his tally for the Bankies four in two and a bit games. Ryan Deas had a great game overall today, as did Josh Lumsden who made some vital stops. Andy Paterson, though, was my stand out. I think he cleared the ball off the line at least three times, and as he rapidly approaches his 200th game for the Bankies he looks like he could easily play 100 more.