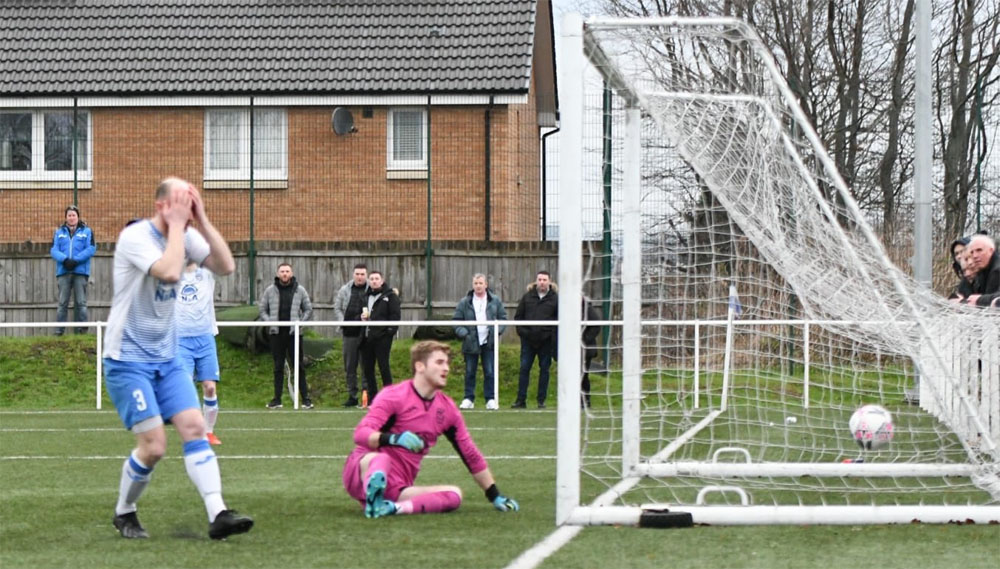 Benburb’s Veteran defender Andy Wright’s moment of madness gave the Bankies the points at New Tinto Park as he swept the ball past his own keeper for the game’s only goal. Clydebank probably just about shaded it over the ninety minutes and certainly created the better chances, so on balance deserved the points that make relegation look that bit more unlikely.

There were a number of changes to the line up from last weeks poor showing at Rutherglen. McMenamin, Rowan, McClair and Lynass all exited the starting line up with Darroch, Holmes, Munro all returning. Aaron Millar also made his comeback from injury with his first game since August.

The game’s only goal was scored after just three when Munro pushed the ball out to Little on the left wing. The Bankies top goalscorer attempted a speculative cross in the box which went between defender and goalkeeper. Andy Wright who has just had 250 games under his belt for the Bens inexplicably drove the ball past Connelly from close range in what would only generously be called an error in judgment.

This was just the tonic the Bankies needed and it spurred them on to be better side in the first half, by and large. It was a bit of a struggle to create anything from open play, but a number of corner kicks from the foot of Craig Holmes almost led to a second goal.

Firstly, a half-hearted clearance from a Holmes flag kick fell to Matt McLean, but his attempted shot on the turn went straight to the goalkeeper. From the same side, Alan Vezza met the ball at the near post with his head, but again Connelly was well positioned to save. The third attempt was a bit lucky for the Benburb keeper as the ball pinballed around his six yard box, before pinging straight at him, though he had to show quick reflexes to hold on to it.

Arguably, the best chance of the half fell to home midfielder Gary Fisher. A cross from the right was allowed to bounce in the box, causing confusion in the Bankies defence. The ball fell kindly to Fisher, but he dragged his left footed shot wide of the post when he should have at least hit the target.

Benburb came out in the second half with renewed vigour, however they failed to threaten the Bankies goal in the opening quarter of an hour with only an off target header from James Marks to show for their efforts.

The Bankies got their act together after the hour mark and had three quick fire efforts that could have killed the game. First off, Aaron Millar did well to beat his man on the left wing and he delivered a fine cross to the back post. Craig Holmes met the ball on the volley, but his attempted scissors kick sailed over the top.

Two minutes later, Alan Vezza chipped the ball over the home defence for Kyle Munro, however Connelly was quickly off his line to block the winger’s shot. The same man had the pick of the chances just a minute later when Nicky Little showed persistence to get a cross in from the right hand side. Munro appeared to have the simplest of tap ins, but somehow a defender managed a great saving block on the line.

The game disintegrated after a series of substitutions failed to turn the tide one way or the other, however there were a clutch of chances near the end. Firstly, we almost had the site of a second own goal when Meechan diverted a cross ball towards his own goal which luckily rebounded off the goalkeepers legs and away to safety.

In injury time, Benburb carved out their best opening of the match when they worked the ball into the box from the right wing. The ball was laid off for Mulcahy, but his side footed shot was well saved by Waters. Finally, at the other end a mis-guided pass by a Bens defender was intercepted by Nicky Little but his similarly side footed shot was gathered by Connelly.

It was a welcome three points, even if a little fortunate. From a team perspective, having Jamie Darroch back in the starting eleven was good, though he looked a little rusty. Also, the return of Aaron Millar would have to be marked down as successful. He definitely needs games to continue his rehabilitation from injury, but he will hopefully get a run to stake his claim for the main strikers spot. Elsewhere, the players stuck to their task and Benburb rarely troubled the Bankies goal. A wee bit more decisiveness at vital moments would be a minor complaint but hopefully that will come as we have not really seen a settled team from Moffat. Next week the Bankies host Beith who have not really performed as well as they can this season. They are on a seven match unbeaten streak against the Bankies so this outlines the difficulty of the task ahead.