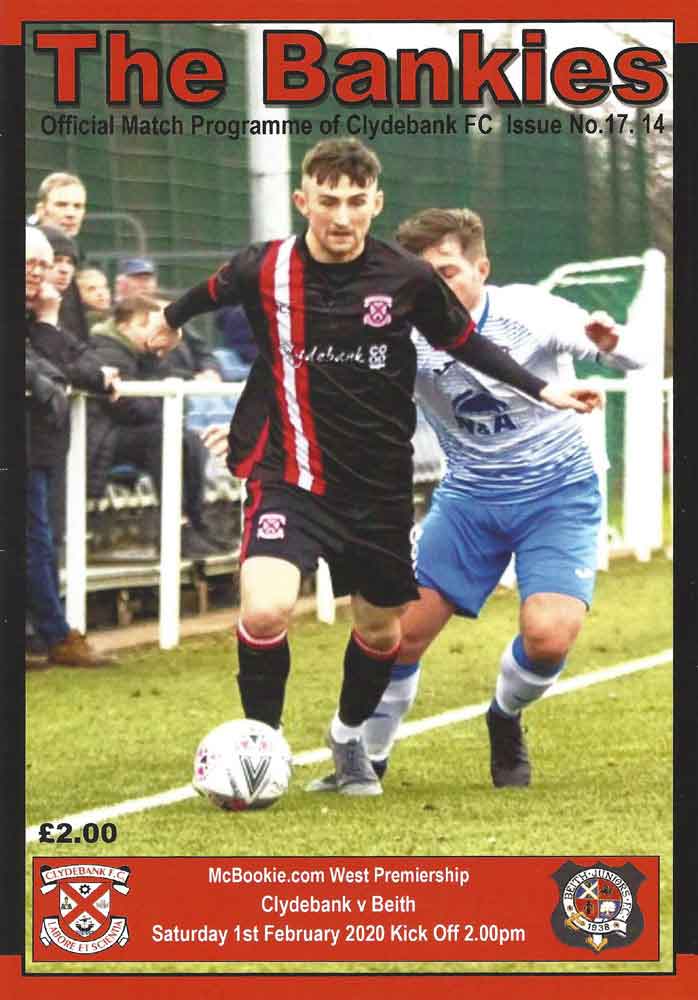 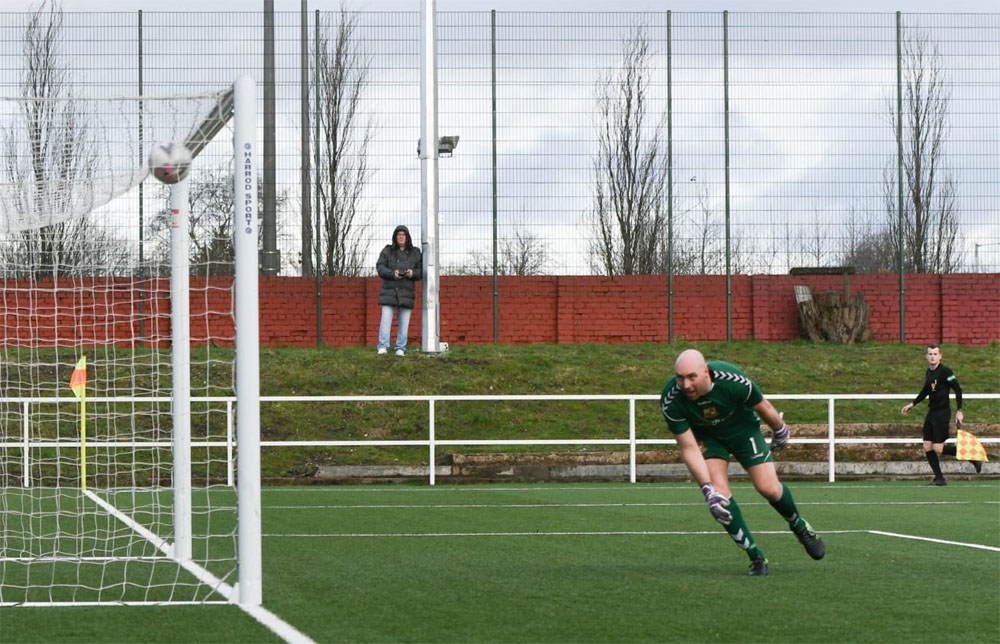 Aaron Millar scored twice in 60 seconds just before half time as Clydebank came from two goals down to earn a share of the points against Beith at Holm Park. The Bankies probably put enough in to the game to deserve a draw, but Beith were the more fluent side from an attacking perspective.

After last week’s win at Benburb, Bankies gaffer Gordon Moffat was able to name an unchanged starting and they almost rewarded him with a goal in the first minute. Nicky Little found himself free on the right wing and delivered an inch perfect cross for Aaron Millar, but the big striker made a complete hash of his header and directed it off target when it looked easier to score.

Beith responded immediately when Paul Frize broke through the home defence and his left footed diagonal shot brought out a fine save by Marc Waters who had to dive full length to his left to push the ball away.

Beith with the wind behind them were causing the most problems and they went close again after 11 minutes when the ball was laid off to Wilson on the right hand side. His powerful shot was always rising, but was only inches over.

Marc Waters saved the Bankies again at the midway point when Matt McLean was robbed of the ball at the corner flag. Wilson immediately whipped a cross into the box which was met by the head of Noble from close range, however Waters pulled off a point blank save to keep the ball out.

The opening goal arrived after 33 minutes and at that stage Beith were worthy of it. It was a poor goal for the Bankies to lose as they were opened up too easily. The ball was played into Frize inside the box, and he had no bother steering it past the exposed Waters.

Six minutes later, and Beith added a second from a simple goal. A free kick from the right hand side was met by John Sheridan who flicked the ball into the net unchallenged. It looked like a familiar road we’ve been on so many times this season, but Clydebank proceeded to score twice in 60 seconds just a few minutes later.

The 42nd minute brought Aaron Millar his first goal since August. It was all about the delivery, as Kyle Munro whipped in a free kick from the left wing that was simply indefensible. Millar did his bit by getting his head to the ball, and directing it on target for an unstoppable goal.

Almost straight from the restart Holmes won the ball and drove forward and pushed it to Millar down the right hand channel. The striker moved the ball inside onto his left foot and let fly from 25 yards. There was a bit of a lucky deflection that made the ball soar past Grindlay into the top corner, The keeper knew he was beat the moment the ball came off his defender and he was rooted to the spot.

Beith couldn’t believe their good work had come undone so quickly, however they set about the second half in a mood to rectify the situation. Five minutes in and Waters made another great stop when he held Wilson’s glancing header from a superb right wing cross.

Clydebank weathered this early storm and the game became a much more even affair. Holmes wasted a free kick from a good position by firing over, then Munro raced into the penalty box and a simple lay off across the six yard box would have resulted in a goal. Instead, he hit the ball high and out of Millar’s reach.

Beith also staked their claim to retake the lead, when Wilson sent in a teasing cross to the near post. It was glanced to the back post, and Docherty slid in at full strength for what looked like a certain goal but somehow the ball squirmed past the upright.

As the game moved back up the other end, Bankies fans thought Nicky Little had got the vital goal. The two subs combined as McClair took a quick free kick for Lynass to run onto down the left wing. Lynass has a great cross in him, and he made good with a terrific ball for Little at the near post. He almost had too much time as he powered in a header that went just the wrong side of the post.

The Bankies almost scored the winner in extra time in what would have been own goal of the season. Beith had just wasted a free kick opportunity that McClinchey had hit off target. Marc Waters struck a long goal kick deep into Beith’s half of the field. John Sheridan rose to meet the ball, but it skidded of the top of his head and looped goalward. Grindlay was off his line and only some dramatic back tracking, followed by a spectacular backwards dive allowed him to get his fingertips to the ball and divert it past the post.

The Bankies move up to the 30 point mark and, although not guaranteed, are getting close to the safety zone from relegation. There are enough games left to pick up the few points that should be sufficient to ensure the club’s position in the top tier. Next week it is a tough trip down to Hurlford United where the Bankies have had a couple of doings in recent seasons. We haven’t won there since 2011 and it would be good time to put that right.