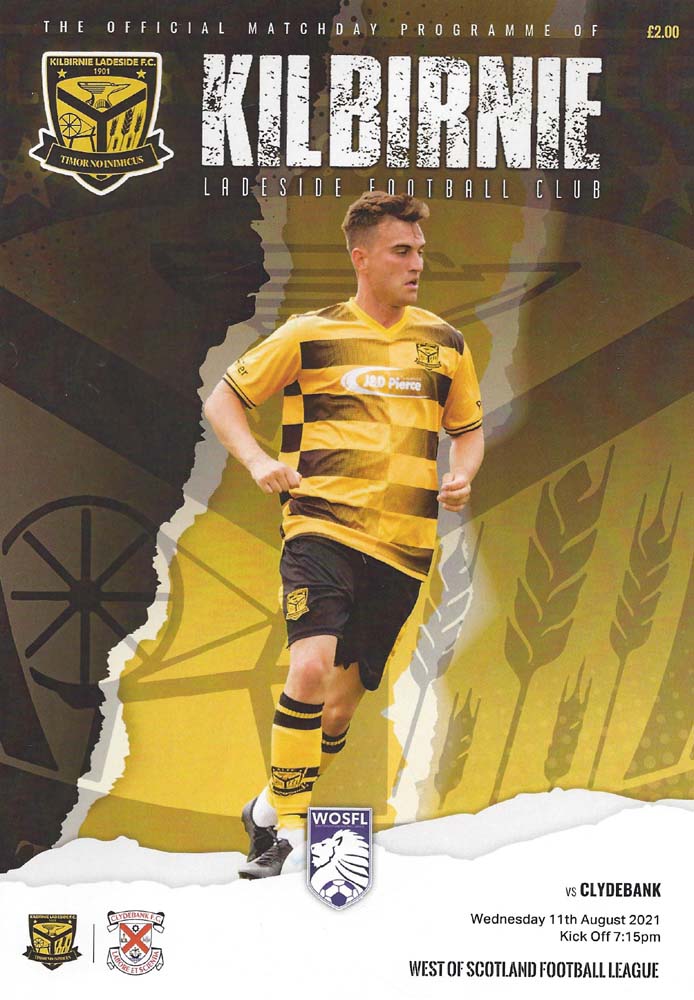 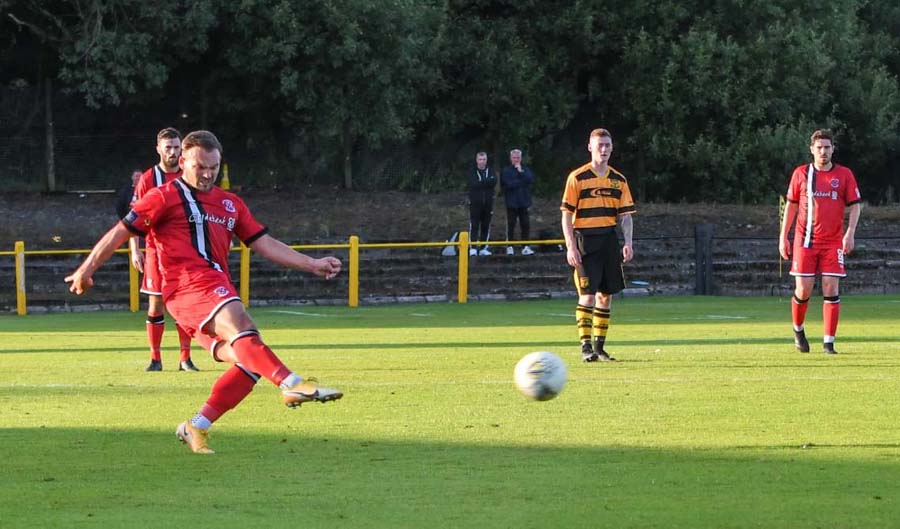 Ross McPherson netted a fine hat trick as Clydebank heaped more misery onto bottom side Kilbirnie Ladeside at Valefield in the West of Scotland Premier League. Despite falling behind early on, the Bankies chalked up their sixth straight victory with further goals from Niven and Gallacher making it five on the night.

It was a fine evening in Kilbirnie and the pitch looked immaculate, and as the Bankies lined up there were quite a few changes to the side again. Matt McLean was out after his red card against Largs, and the big surprise was Nicky Little being on the bench. McKinlay and McGonigle were also substitutes making way for Darroch, Lynass, McClair and McPherson.

Clydebank were in control early on but took a while to gain a proper sight of goal. With eight minutes gone Johnstone found Lynass on the right hand side of the box. The ball sit up nicely for Lynass, but he miscued his shot and the keeper gathered easily.

Suddenly, the Bankies looked more dangerous as Cammy burst through a minute later, but he dragged his reverse shot wide of the post. Then, the same player picked up the ball in the last third and raced towards goal. The defence seem to part for McClair and he drove a shot towards the top corner. Keeper Wilton appeared to have it covered, but the he spilled the ball and he was fortunate to see it rebound off the post and back into his arms.

Just as Clydebank looked to have a stranglehold on the match they went a goal down after 12 minutes. It was a bit of a disaster for Frazer Johnstone when his misplaced pass put Dylan Henry through on goal and the striker was ruthless with his finish, side footing it past the helpless Stevenson.

Kilbirnie were quite competitive after the goal as it seemed to give them a bit of impetus, and the Bankies took a while to regroup. When you are bottom of the league, things can turn wrong quite quickly and on the half hour, Ladeside had lost two goals in two minutes and were behind.

The first was a wee bit fortunate for the Bankies. A cross from the left saw a defender beat Gallacher to the ball, but it ran across the edge of the box nicely for McPherson who took a touch and deceived Wilton sending him the wrong way.

The second was a trademark McPherson free kick from around 30 yards out. He struck the ball like an arrow and beat Wilton all ends up for his 50th career goal for Clydebank.

The Bankies regained their composure once they were in the lead and from this point the destination of the three points was never really in any doubt. As per the first half, it took the Bankies a while to get going after the restart, but after 56th minute the game was killed off.

A Gallacher corner was drilled perfectly to the back post, and Matt Niven was incredibly brave as he threw himself at the ball bulleting it into the bottom corner. The big defender took a fair old knock to the side of his head and after a lengthy break he had to substituted.

The Bankies were able to relax just five minutes later when they increased their lead. Lee Gallacher was instrumental in the move as the Ladeside defence couldn’t get the ball off him. Deep in the home side’s area, Gallacher found Lynass who tried an ambitious overhead kick that kind of went towards the goal. The ball bounced up and it went straight to McPherson who helped it into the net to complete his hat trick.

The question now was really how many could the Bankies score. With the game won, Clydebank tended to play within themselves and take advantage of chances when they presented themselves. Gallacher, McClair and Lynass all had decent chances, but it took a penalty kick near the end to finish the scoring. McClair was clearly fouled in the box, and Lee Gallacher, who had a great game, thumped the ball into the bottom corner for his first goal of the season.

For such a huge winning margin, I don’t think the Bankies ever really hit top gear. Kilbirnie are in a bit of dire straits at the moment, and you felt even when the Ayrshire side took the lead that Clydebank had enough about them to turn the game around. The Bankies have had the luxury of rotating the squad this season and two of the players who came in tonight were amongst the top performers, Jamie Darroch, and Ross McPherson. Lee Gallacher was excellent again and Nicky Little and his 100th goal will just need to wait a while longer.

Next up is probably the toughest test for the Bankies since the opening day at Auchinleck. Irvine Meadow come calling to Holm Park on the back of a four match winning streak. Meadow have a very good team and are now finding their feet after a shaky start, and will be a big success if the Bankies can take all three points.