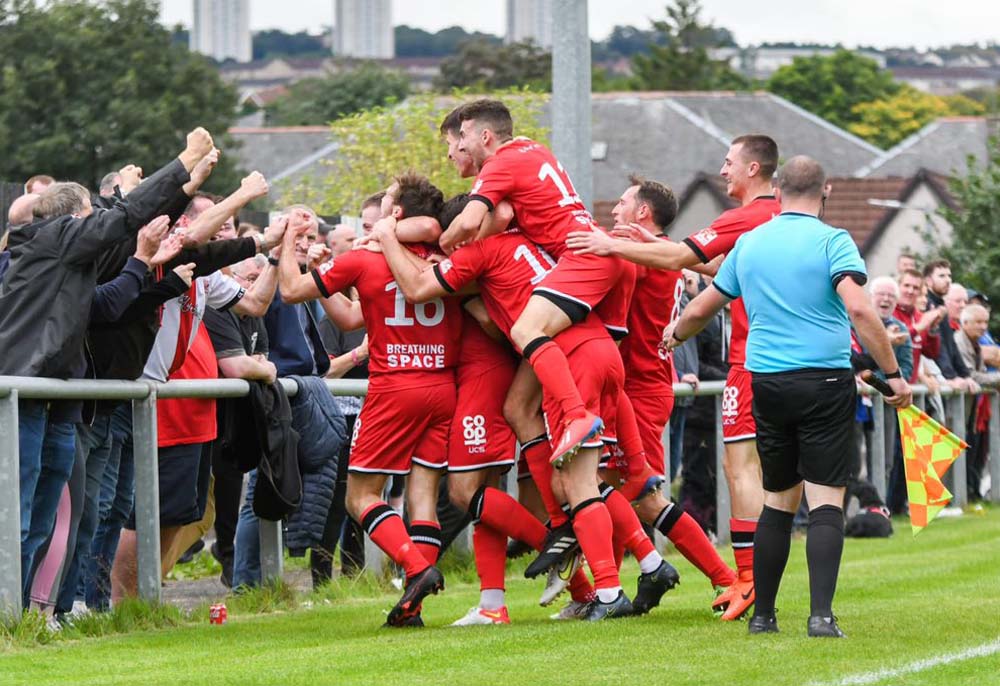 Clydebank somehow managed to come away with all three points from Rutherglen in a game that looked to be drifting away from them. For 78 minutes the Glens match plan had worked to perfection, as they defended solidly and scored the all-important opening goal on the break. The Bankies substitutions, particularly Ciaran Mulcahy and Chris Black turned the game in the Bankies favour with the latter scoring the winner just nine minutes from time.

Clydebank’s injury problems are now starting to clear up a little as keeper Jamie Donnelly and Michael Bailey are the only missing players. Suspension ruled out Fraser Johnstone and this led to a slight re-jig with Craig Holmes moving into the middle of the park, and Cammy McClair coming into the wide position.

You could tell the Bankies were still on a high from last week’s Scottish Cup win as they dominated the first half almost completely. The passing that brought so much joy against Dalkeith was evident again. However, this time there was no end product. Rutherglen are a much tougher prospect altogether and they got their men behind the ball, and packed the goal area whenever the Bankies got anywhere close.

Nicky Little, seemed way too withdrawn in the first half. He was more likely to be seen picking the ball up deep from his back four rather than playing in the more advanced role where he can hurt the opposition. This led to Hamish McKinlay being isolated up front for much of the time against three big central defenders who easily dominated him.

The Bankies could have done with being just a bit more direct at times, as they were rebuked time and time again by an organised defence. Despite having all the pressure, Clydebank hardly had a shot at goal in the whole of the first half. A tame header from McKinlay from a McClair cross after 12 minutes was the only on target effort, and McClair himself had a volley from the edge of the box that was well over the bar just before the interval.

The home side knew they would have to pick their moments to get forward, and on the one occasion that they broke forward they should have scored. A forward (The numbers on the back of the Glens shirts make it virtually impossible to identify their players) received the ball in the penalty box and maybe a slight lax touch took the ball just a little wider of the goal than he would have liked, but he wrapped his foot around the ball and was unlucky to see his shot crash off the crossbar.

Clydebank looked more determined at the restart and Little seemed to be pushed further forward, and there were a couple of incidents of note early on. Little had a penalty claim when he appeared to be bundled over by the goalkeeper, but the ref was having none of it, then a fine passing move saw Gallacher put Byrne in behind the Glens defence on the left hand side and he dragged it back across the box. It was a great chance for McKinlay but he rather disappointingly scooped the ball over the bar.

After that Glencairn began to do an even better job of breaking up the play, and Clydebank looked to be out of ideas. It was as poor a spell of play from the Bankies we’ve seen all season, and then things were about to get a whole lot worse just after the hour. A long clearance upfield reached Jack McIlveen on the right hand side. He showed great pace to get away from the Bankies defence, and Despite Jamie Stevenston’s best efforts he couldn’t stop the strikers powerful shot from just inside the box finding the net.

It looked pretty desperate at this stage, as it was hard to see where a goal was going to come from. Then after 65 minutes the vital substitutions were made as Mulcahy and Black entered the fray. Initially, not a lot changed but one notable thing did, and that was Mulcahy’s ability to win the ball in the air, his movement and the use of his body strength in advanced positions. We suddenly had another option, and it was his introduction that was key in disrupting the Glens defence who up until that point had not had a whole lot to worry about.

The Bankies forced a corner with just twelve minutes remaining and it was a tremendous delivery by Gallacher as the ball arrived right on the goal line. It was just a melee of bodies as someone – It turned out to be Joe Slattery – bundled the ball over the line from about two feet out.

The goal seemed to make the Glens lose their tactical discipline and within three minutes they were behind. A fantastic diagonal ball from Gallacher was touched on deftly by Mulcahy to Chris Black just inside the box. With the keeper caught off his line Black hit a slow motion lob over his head and it took an age to come down but it dropped on the right side of the cross bar and into the net.

The Bankies saw the game out relatively comfortably after this, and to take the three points was quite incredible in the circumstances. Good teams do win when they don’t play so well, but the Bankies tried to take that to the nth degree today. The pressure is on to keep winning and getting that result keeps the Bankies tucked in behind Auchinleck reminding them that we aren’t going to go away easily.

Our first midweek league game under the lights is this Wednesday when Hurlford United travel to Holm Park. Without question Ciaran Mulcahy should be in the starting eleven if he is fit enough to do so. He is exactly the combative type of player that we need and gives us a different dimension that we have been missing, especially against a Hurlford side who we’ve struggled against physically. Fraser Johnston should also return from suspension.