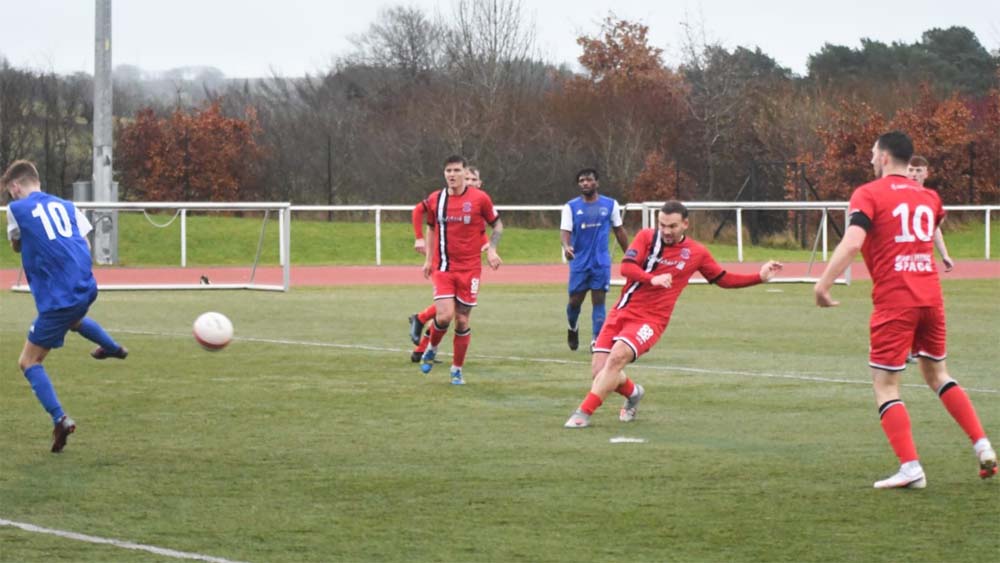 Ross McPherson celebrated his 150th appearance in Clydebank colours by netting a couple of goals as the Bankies recorded a comfortable in the end, but certainly not convincing 4-0 victory over Carluke Rovers in the West of Scotland League Cup.

Still smarting from the Bankies poor display at Rossvale during the week Gordon Moffat sent out a pretty much full strength side, missing only Jamie Darroch and Joe Slattery. There was also a welcome contingent of the Bankies Under 20s side on the bench.

It was a miserable day with a fairly strong wind at pitch level, and not surprisingly it was a low key start with only a couple of early yellow cards dished out by referee McLaughlin in the opening minutes for Bankies Byrne and Rovers O’Reilly.

The first chance came after six minutes for the Bankies as Chris Black stooped to get his head on a Lee Gallacher corner, however he couldn’t keep the ball down and it sailed over the bar.

Clydebank assumed strong command after this and were well worth the opening goal in the 11th minute. It was a simple as you like goal, as Paul Byrne supplied a deep cross to the back post which evaded the home defence, and Lee Gallacher directed a looping header over the head of Bell into the back of the net.

A minute later Black received a short pass from Little on the edge of the box and he swivelled and hit a shot which Bell had to push away for a corner. From the resultant flag kick, Matt Niven met the ball at the back post and his downward header was only denied by a ruck of legs on the goal line before the ball was hacked away.

At this stage it looked like a cricket score was on the cards, and then it all just stopped. The Bankies receded into their shell; the wayward passing reared its ugly head again and Carluke fought their way back into the game.

The Bankies defence were looking their usual solid self, however Carluke could have drawn level just before the half hour when Frame Put Goodall through on the left hand side. The angle was incredibly tight for the full back and Donnelly had no problem deflecting the ball out for a corner.

The Bankies had completely lost their way and it was only good fortune that they went into the interval another goal to the good. It came from a corner kick, and as Niven challenged for the ball he claimed loudly for a handball. It didn’t seem particularly clear from the terraces, but the referee agreed and gave the penalty. Nicky Little was expert as ever and sent the ball away for his 16th goal of the season.

The Last action of the half saw Carluke have their best chance of the match when a cross from the right was met on the volley by Wilson, but he put too much on it and the ball sailed over the bar.

The opening quarter of an hour of the second half was much the same except the game was played further towards the Carluke goal. The home side offered little from an attacking perspective and the Bankies were not much better, as they just seem to be lacking the fluency from earlier in the season.

The Bankies finally made the breakthrough in the 63rd minute and it was pretty much the first shot on goal of the second half. It was a good move as well down the right hand side, and Black’s cross from the right side bye-line was cut out by a Carluke defender. The ball fell straight to McPherson at the penalty spot, and he planted it superbly into the net with his left foot.

With the game now won, the Bankies relaxed a bit and were able to create a bit more as Carluke, although full of effort, had ran out of steam. It was disappointing that at this stage that Moffat elected to bring on Holmes and Lynass as substitutes. This was the ideal opportunity to have a good look at youngsters Smith, Coll, and Hamilton with 25 minutes still to play. It’s not often you get the chance to bring on young players, as other games are regularly in the balance, and it is rightly not worth the risk. This, however, looks like a missed opportunity from these eyes, and a 7 paltry minutes for Coll is all that was given.

The Bankies went on to make a few chances towards the end, and Black should have scored when he had a glaring miss from a clever cut back from Lynass which went straight into his path. However, he ballooned the ball over the bar. A goal did arrive with just two minutes remaining to give the scoreline some extra sheen when McPherson got his head to a cross ball, and it deceived the keeper hitting the net via the inside of the post.

On the surface it seems like a good professional performance, but a chunk of the game in the middle of the match was very poor indeed. There is only one more game against Kilbirnie next week before the competitive action stops for the holiday season and resumes on the 8th of January at Benburb. The Bankies players look like they could do with a break as this was their 30th competitive match of the season, which is not far off what they would play in a full term in the past. At the halfway stage, you can’t complain too much. We are still involved in every competition, and there is a lot to look forward to next year. Today, It was a shame that the management didn’t see fit to give the youngsters a bit more game time, but hopefully they will be given an opportunity later in the season.