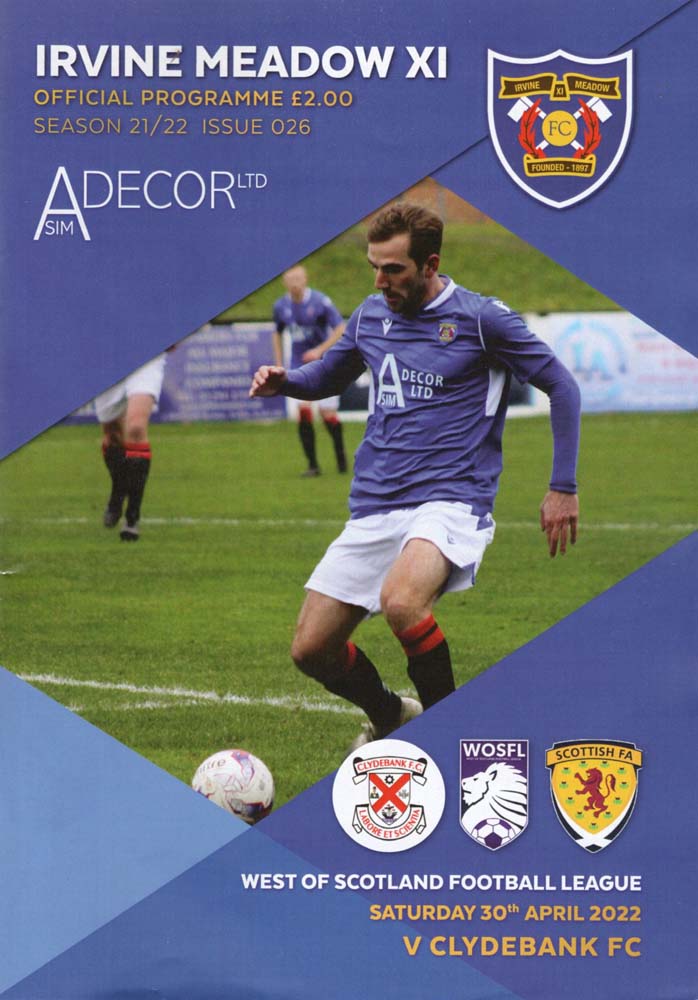 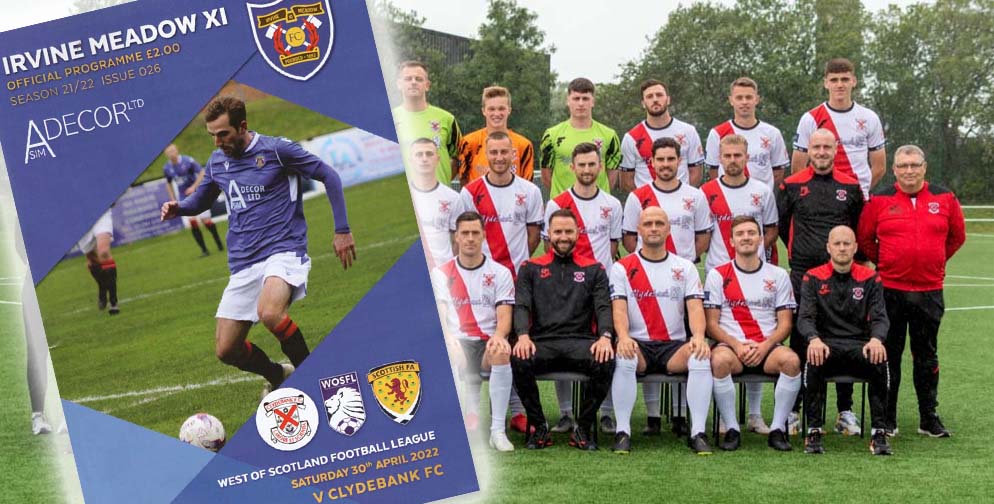 Clydebank showed once again what a fine side they are away from home with a comprehensive defeat of Irvine Meadow by two goals to nil at Meadow Park this afternoon thanks to first half goals from Joe Slattery and Nicky Little. The Bankies dominated the game from start to finish and will probably never have such an easy victory at this ground versus an opponent who traditionally are very difficult to beat.

The Bankies in the last month or so have beaten league leaders Darvel, Pollok, Kilwinning Rangers and Irvine Meadow all away from home for the loss of just a single goal. The stats on our travels are quite impressive: Of the 11 shut-outs in the league this season, 9 have been away from home. Only 14 goals have been conceded, and it has to be remembered we lost four in one match in a rare off day at Benburb. 13 victories from 18 matches with one game left to play at Largs in a fortnight with just two losses all season. The contrast with the home form is startling where we have amassed just 29 points against 42 points on the road. More than double the amount of goals have been conceded at Holm Park where the ball has hit the Bankies net 29 times. It wouldn’t have taken much of a swing in home form to have had us challenging for the league title. Whether we can replicate the away form next season is a big ask, but an improvement in home performances should see us there or thereabouts and hopefully challenging for a place in the Lowland League.

As for the game at Meadow Park, the game was effectively over by half time. After a feeling out period in the opening ten minutes, the Bankies took a hold of proceedings and barely let go for the rest of the half.

The first chance fell to Nicky Little who played much better than he has done in a while. His shot on the turn was blocked by ex-Bankie Marc Waters who saved for a corner. This was the first in a series of corner kicks for the Bankies which have been quite fruitful in terms of goals this season, but there was no luck today.

Meadow’s front three were lively enough on the break and striker Boyd sent Holland away on the right hand side but his well struck shot was beaten away by Donnelly in the Bankies goal..

Just a minute later Ciaran Mulcahy should have scored with a free header in the box following a pin point cross from McHugh, but he sent it wide of the post. However, a further minute on and the opening goal was scored.

It was a bit out of nothing as the ball broke to Mulcahy around twenty five yards from goal. He left it to Joe Slattery who was in a better position and he produced a special finish, curling the ball beautifully into the top left hand corner of the goal.

The Bankies were utterly dominant after this. McGonigle mis-hit a volley from a poor clearance. Then, a goal bound shot was deflected over the bar by Findlay who managed to get his head in the way. Mulcahy hit the post with a header though he was found to be offside and finally Nicky Little saw a shot on goal take a couple of deflections and unluckily go straight into the arms of Waters.

The fortune of the match rested on two incidents in the space of a few minutes. Meadow were awarded a corner on the right hand side, and the deep cross was flicked to Boyd who was free on the left hand side. From around 10 yards out he fizzed in a shot that was beyond Donnelly; however Ciaran Mulcahy made a tremendous headed clearance on the line to prevent what looked like a certain goal.

From almost losing a goal the Bankies proceeded to score a second at the other end. Meadow keeper Waters had already rushed from his penalty area to head away a dangerous through ball earlier in the game. In a repeat show, he made a mess of it this time and the ball went to Nicky Little around 35 yards from goal. It wasn’t Little’s strongest ever shot but his low grounder had enough on it to get past Waters who desperately tried to get back to his unguarded goal, but the ball sneaked just inside the post.

With the rain teeming down, it didn’t look Irvine Meadow had it in them to make a comeback and the Bankies managed the game well in the second half. There was some smart build up play at times but maybe the final pass or shot was just lacking.

In one of the better moves after 57 minutes, McGonigle cut in from the left wing and played a neat pass to Gallacher across the eighteen yard line. The Bankies winger knocked the ball into the box first time for Nicky Little whose quick shot was only stopped by the right leg of Waters.

One of the most entertaining moments came with ten minutes remaining when Chris Black beat almost every player in the Irvine Meadow team, some with great skill and others by good fortune, he found himself with only the keeper to beat. A truly memorable goal was only thwarted as Waters got down quickly to stop Black’s prodded shot from going in the net.

The home side could have earned a consolation deep in stoppage time when an incredible series of misses saw the ball ping pong about everywhere including the post, but the Bankies goal remained intact for a very comfortable afternoon.

The Bankies are now ten points ahead of Kilwinning Rangers with just one game to go, so fourth placed is a very creditable effort. The top four have been the best teams in the league by a distance, and in that grouping the top two have been way out in front.

The Bankies travel to Kello Rovers next week in the third round of the West of Scotland Cup for the first ever competitive match between the sides. It is the Bankies last chance of putting some silverware in the cabinet so we are expecting a strong showing.