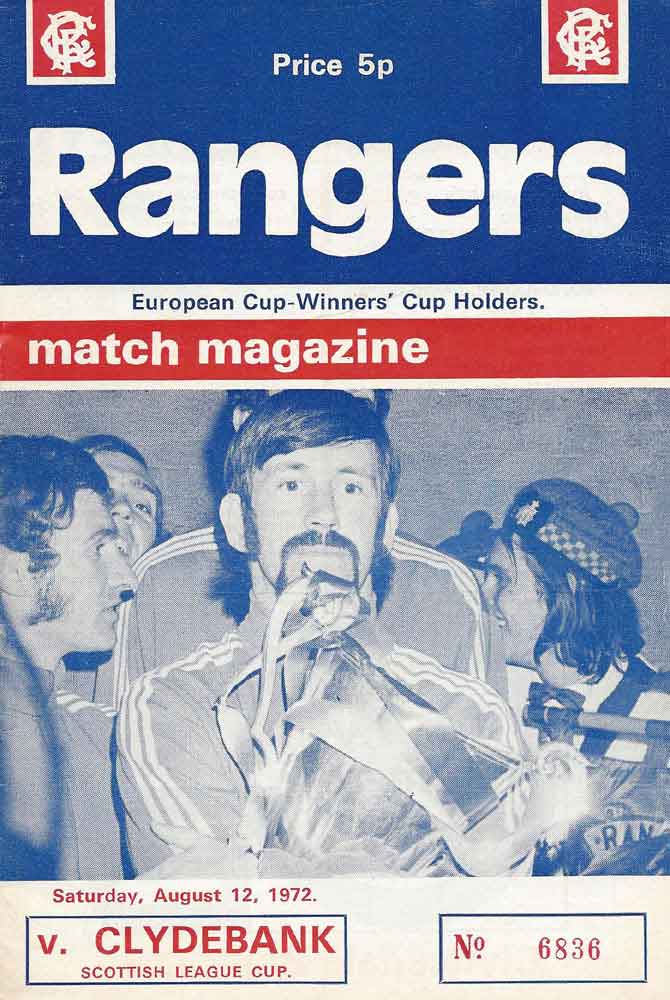 There was a pang of pity in my heart on Saturday afternoon about 2.50 pm. Down below my seat in the Press box the Rangers players were being presented with their European Cup Winners Cup medals and the actual cup was being paraded around the ground while the Clydebank team stood lined up at the touchline like the proverbial lambs before the slaughter.

It was for them I felt the pity. For there they were the newest league side in Scotland about to take on the 1971-72 Cup Winners Cup holders. But at the end of the 90 minutes the Bankies walked from the turf beads held high with pride and quite rightly so.

Sure, they had just been beaten 2-0 but they hadn't been slow-handclapped and jeered by their supporters as the Rangers team had. In Mick McDonald and Jim Fallon they had two of the best players on the field.

McDonald in particular proved something of a favourite with the Rangers supporters. Every time he made to clear the ball from his penalty area in the first-half the catcalls and booing from the home fans reached a tremendous crescendo. It may have had something to do with the fact that he is a Celtic supporter!

By comparison, the reception he got in the second half was as different as night is from day. The Rangers supporters were deadly silent. Whether it was because they were worried about their own side's performance or whether it was because McDonald's brilliant play was not being affected by their antics (indeed it seemed to have the opposite effect), we shall never know.

The good natured attitude on the terracing was matched on the field where, for the most part, the game was played in a very sporting atmosphere. Dougie Hay and Alfie Conn managed to get themselves booked by the referee but this was just a case of hot-headedness rather than out-and-out badness.

Hay brought down Conn from behind with a mis-timed tackle. Conn jumped to his feet and there was a bit of pushing between the two until other players intervened. But the referee saw all and had no hesitation in pulling out his wee black book,

Dave Smith, by far Rangers best player afield, had the hearts of his team-mates in their mouths in the very first minute when he made a mess of a pass-back when being hounded by Jim McPaul and put the ball past his own goalkeeper for a corner kick,

McDonald was soon in action, tipping a shot brilliantly round the post at full stretch. At the same time Tommy McLean was being given an aside ticking-off by the referee for having a kick at Dougie Hay after the Clydebank man had tackled him.

Rangers really began to turn on their power and were soon swarming around the Clydebank goal like a group of blue-shirted wasps trying to open the scoring. Colin Stein thought he had done just that in the 13th minute when he saw a great header flash past McDonald - but Danny Gray popped up from nowhere to head the ball off the line.

The Bankies immediately retaliated and Jim McPaul tried a first time shot just inside the box from a Gregor Abel pass but the effort was blocked by the legs of Rangers centre-half, Colin Jackson.

Alfie Conn put a lovely ball through to the running Willie Johnston and it seemed certain a goal was on the cards as the speedy forward left the defence flat-footed, but McDonald was off his line just as quickly to block the number eight's parting shot.

A minute later Stein tried to side-foot a cross into the net but this effort was cleared for a corner by Pat Delaney, injuring himself in the process. He recovered after treatment.

Willie Johnston did have the ball in the net in the 22nd minute but as he had used an arm to bring the ball under control, before shooting home at the second attempt, the goal was not surprisingly chalked off by the referee

Another Rangers attack ended with Stein looking at the referee, from his prostrate position, appealing for a penalty after being downed by Delaney. But all he got for his troubles was a fruitless corner-kick.

Thirty seconds after the corner, the bustling centre-forward did get the ball into the net but he was off-side.

John Greig came rushing through the middle after dispossessing Hay in mid-field and cracked a low shot from just outside the box which evaded McDonald, but Fallon came rushing in to clear the ball unceremoniously from the line for a corner.

The biggest cheer from the Rangers supporters came immediately after the corner, when McDonald was injured in a goalmouth scramble. Although the goalkeeper didn't beat the "terracing count,” he did recover. Just to show how well he was McDonald amazingly saved a point blank effort from Greig.

A couple of minutes later Greig tried again, but when it seemed easier to score he incredibly missed the target. The howls of derision and cat-calls from the terracing let the Ibrox skipper know how the fans felt.

The second-half was only four minutes old when Rangers had the ball in the net again but the scorer - Alex McDonald - was offside.

A few minutes after Greig headed over the Clydebank crossbar from almost on top of the penalty spot, the home fans' patience wore out and the slow-handclapping started.

Their mood was hardly helped when, in the 65th minute, Rangers had another goal chalked off. Greig managed to squeeze a shot into the net and it seemed as if Rangers had broken their duck... until the referee spotted the linesman with his flag up and, after a short consultation with him, disallowed the goal.

But two minutes later the duck was broken. A cross-field pass to McLean caught out the Bankies' offside trap. The winger cut in on goal, dummied a shot before swerving to his left and putting the ball into the path of the inrushing Conn. Conn wasted no time in slamming the ball, in his stride, low into the corner of the net.

This had the most amazing effect on the home fans. They were so delighted at being a goal up that they actually applauded a Dougie Hay shot three minutes later which was just too high,

With a minute of the game left a Stein header came off the bar and was cleared for a corner by substitute Norrie Hall who had come for Andy Roxburgh mid-way through the second-half.

Almost on the 90 minute mark Stein unleashed a tremendous shot which McDonald could only deflect into the air and there was his Rangers name-sake, Alex, waiting to nod the ball into the net at the post for the Ibrox side's second goal.

As you will no doubt have gathered it was Rangers who did most of the attacking. Some at atrocious finishing, coupled with some brave and resolute defending helped keep the score down to reasonable proportions.

The Bankies defence was immense From McDonald through to Hay there was no weak link. But as for the rest of the team, well, that's a different story.

For them to be really consistent in points-gathering this season they are going to have to find a mid-field player and a forward or two with the goal-scoring and goal-making touch.