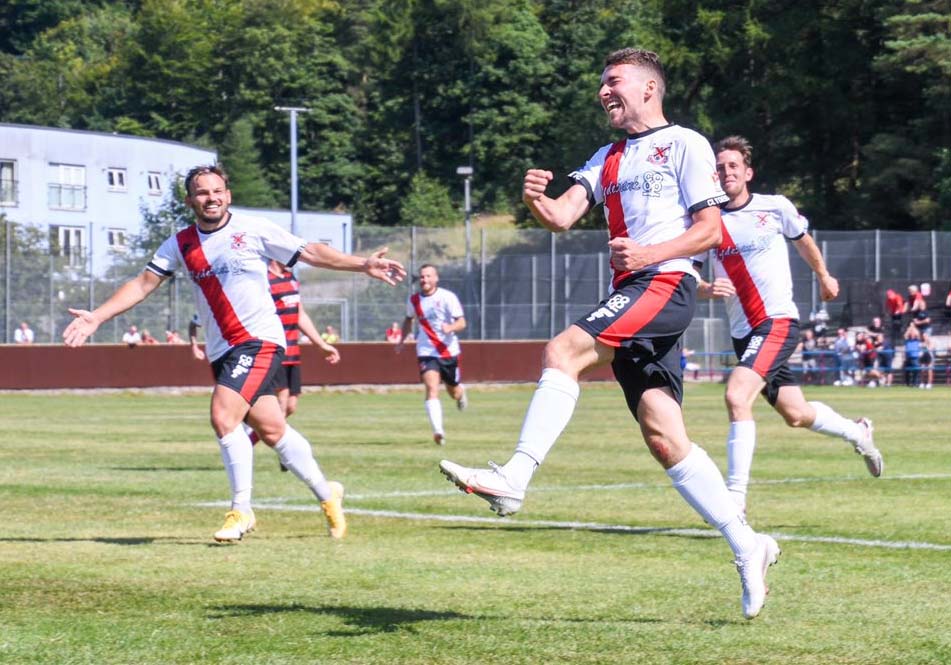 Liam McGonigle came off the bench for his first match in over six months to strike the only goal in a poor game of football against Rob Roy at Guy’s Meadow. It looked like one goal would probably be enough to win the match, and if anyone was going to score it then it was likely to be Clydebank. Rob Roy offered nothing but honest endeavour and hardly had a shot at goal all afternoon. The Bankies weren’t much better and showed a dismal lack of imagination until Slattery and McGonigle entered the fray.

In fairness to the Bankies, Moffat was forced into a lot of changes, with Darroch, Niven, Mulcahy, Black and Hodge all missing whilst McClair and Byrne were dropped to the bench. In came McHugh and Owens for their first starts of the season, and Nicky Little made his 150th appearance in Clydebank colours. Talking of colours the Bankies splendid new home shirt made it’s debut for this match as well.

To skim over the first half; nothing happened. It was a terrible game and the Bankies seemed to be still suffering from the same problems as they did in midweek. There were too many long balls, and not enough passing, most of which was erratic anyway. Frazer Johnstone picked up an early booking and it seemed to affect his usual style of play and he was later substituted.

The nearest thing to a goal was an unrealistic lob by Nicky Little that drifted over the bar which the keeper had covered, and a Matt McLean header from a corner which went low past the goalkeeper’s right hand post. Clydebank did start to push the Rabs defence back towards the end of the half, but there was no cutting edge.

The second half did not start any differently, apart from the five yellow cards shown by the ref in the opening ten minutes. The introduction of Slattery on the hour certainly tipped the balance in the Bankies favour. You could see the possibility of a goal being scored.

Up until then, McPherson had a couple of half chances, a volley/trundler that didn’t trouble Kerr, and another shot that was blocked by a defender from a reasonable position. With 63 minutes on the clock, a good chance was finally created. It was Slattery who moved the ball onto his left foot and forced Kerr in to a decent save on his right hand side. McPherson followed up but blazed the ball over the bar.

Then Nicky Little fed Lee Gallacher with the ball on the left hand side. Gallacher’s initial shot was blocked but he followed up with a deft lob but Kerr was always in control of the situation.

McGonigle then returned to action with 72 minutes played as a goalless draw was on the cards. He was immediately involved as he lifted a cute cross from the right to Gallacher in the box, who then played a short pass to Holmes. The midfielder had a good sight at goal but lost all composure as he blasted the ball wildly over the bar.

With just nine minutes remaining the Bankies got the goal that they probably overall deserved. A break on the right from McPherson saw him feed the ball to McGonigle who overlapped on his inside. The pass looked a little short, but McGonigle managed to drag it forward, and then curl a great finish into the back of the net from the edge of the penalty box.

There was no question that the game was now over. Rob Roy battled on, but they could have played all night and not have a shot at goal never mind score a goal. The Bankies ran down time without really threatening the home goal again.

Despite the Bankies team selection being a bit stretched, it was another disjointed performance. The positives are that the club remain unbeaten in their opening three games and have picked up five points when in the past it might have been only one or two. On the other side, the team have simply got to play better. The games are only going to get harder and there just seems to be two or three vital players off form at the moment. With the favourites for the title all laying down a strong marker, it is vital the Bankies don’t give themselves a huge catch up job to do.

Cumnock visit Holm Park on Wednesday, and this will be a good test of Clydebank’s ambitions. The Ayrshire side have been at a similar level to the Bankies in the main over the last few years, and are a club who have title aspirations of their own, so there will need to be an improvement if the three points are to stay at Holm Park.