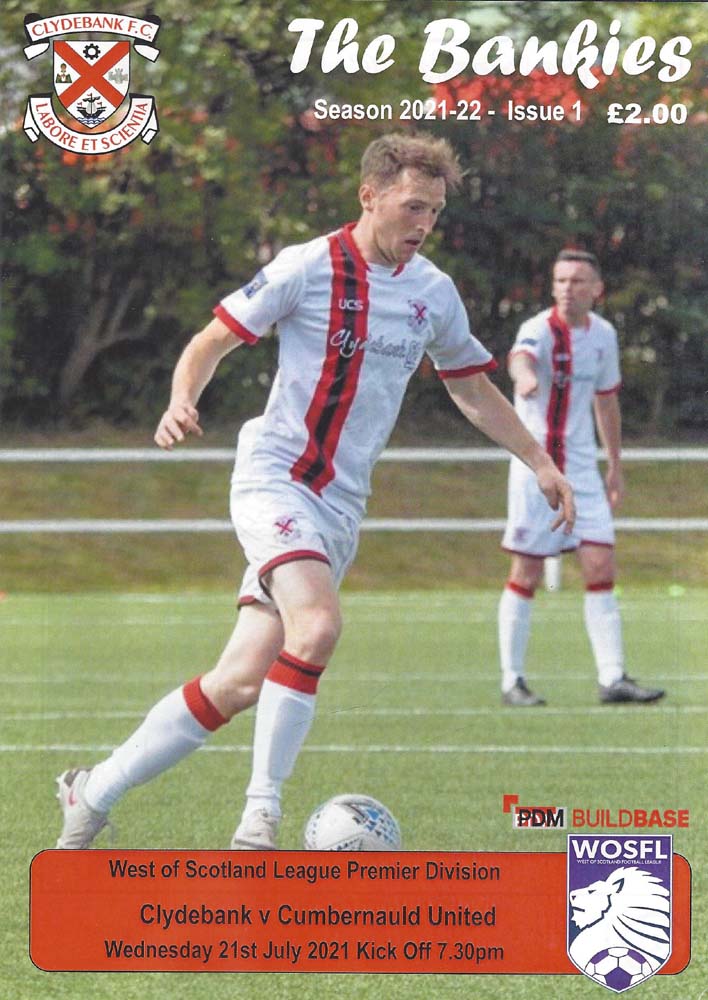 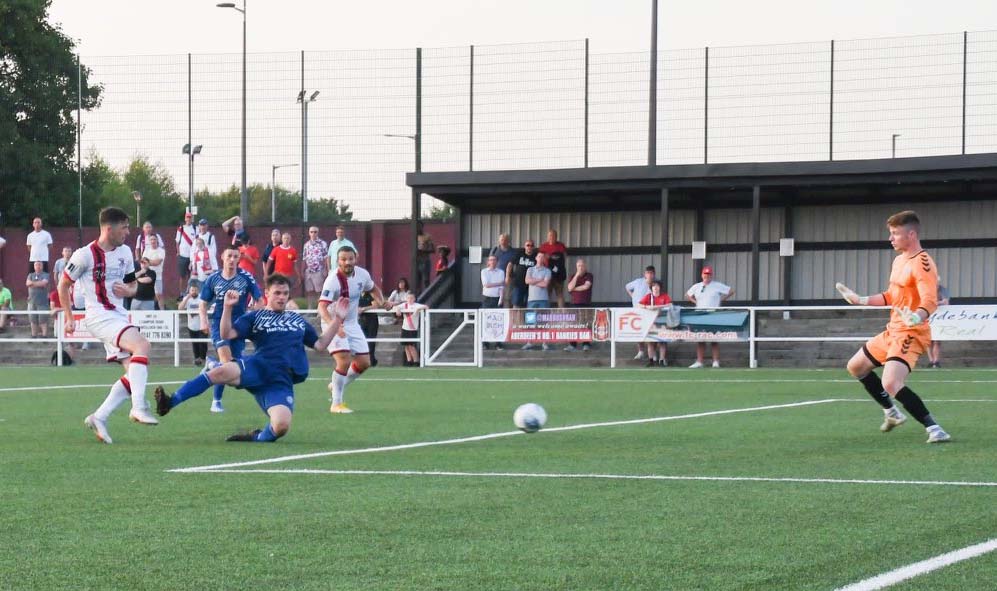 A very healthy attendance came along to Holm Park to witness Clydebank’s first competitive match in front of fans in Senior football in over quarter of a century. It was a great site to see so many decked out in Bankies colours, however the match was a big disappointment to the supporters as they only managed to scrape a 2-2 draw with Cumbernauld United, and they required a goal deep into stoppage time to get it.

Expectations have been high going into this season and Saturday’s performance at Auchinleck served to underline that optimism. This, however, was an error strewn performance, particularly, in the first half. Despite an improvement in the second period, Cumbernauld will be disappointed they didn’t take all three points up the road. They showed the same tenacity and energy that the Bankies did at the weekend and will feel they didn’t get their full reward.

Three changes were made to the starting line up with like for like replacements in the shape of Slattery, McClair and McPherson with Black, Lynass and Mulcahy making way. Black would be the unluckiest in that trio after having a strong game at Beechwood Park.

The Bankies started the game fairly positively, and had a quick snapshot from Little in the opening minute which was smothered by McGhee. The same player should have opened the scoring only minutes later when the ball fortuitously found him from a McPherson free kick, however the Bankies front man should probably have done better than skidding the ball off the top of the bar.

As the game settled down, Cumbernauld began to force the Bankies into more and more mistakes. They were solid at the back and had willing runners throughout their team. Kieran Boubekri was to give United their first sight of goal but his speculative effort from distance sailed over the bar.

The Bankies were starting to become restricted to longer range efforts, as the away rear guard closed ranks. This allowed United to gain confidence, and their midfield were starting to own this vital area of the pitch. When they took the lead after 24minutes it was just rewards for their efforts.

What makes it particularly bad from the Clydebank point of view is that the goal came from our corner kick that was cleared with a huge punt up the pitch. Boubekri picked up the ball on the left hand side, and the normally reliable Paul Byrne will be having nightmares at the way he was beaten with such ease on the bye line by the striker. Boubekri, then did a nice job squeezing the ball past Donnelly at his near post.

Cumbernauld got a massive lift from the goal and should have gone two up just minutes later. A break down the left saw O'Hare hit the bye line, and roll the ball across the goalmouth for the incoming Hannaway, however he contrived to hit the outside of the post when he should really have scored.

As the first half was coming to a close, Clydebank had further long range efforts without forcing the goalkeeper into a save, but then managed to grab an equaliser to set themselves up for the second period. Lee Gallacher was the creator as he weaved along the bye line and prodded the ball back to McClair who took one touch and rifled the ball into the top corner.

The late goal gave the Bankies a huge boost and they came out all guns blazing in the second half. The play was more fluid, and pressure was being applied to the United defence. For the first time in the match it looked like Clydebank were going to go on and win this match, then it all fell flat after 54 minutes, when the visitors scored against the run of play. Clydebank never really cleared their lines properly just outside the box, but great credit has to go to Tom Neil, who took control, and from easily 25 yards out hit an absolute beauty that Donnelly couldn’t even dive for.

This knocked the wind out of the Bankies sails and the pattern of the first half began to creep back in. However, it started to become noticeable that Cumbernauld were maybe starting to tire in the heat. This allowed Clydebank some glimpses at goal. McClair should have down better with a side footed effort that was weak, and then McPherson brought out a tremendous save from the goalkeeper who dived spectacularly to his left to push away an absolute bullet of a shot.

Gordon Moffat then made three substitutions which tells you exactly how he felt the game was going, but it had no immediate impact. As Cumbernauld began to run down the clock it looked more than likely that they would hold on as the prospect of a goal became more remote.

However, this Clydebank side does have some character, and they used their get of Jail card to rescue a point deep in stoppage time. A long punt up the park found its way to Lynass on the right wing, and he expertly lifted the ball over a defender into Nicky Little. The Bankies captain has been disappointing in his first two games of the season, but he found the right time to come alive, as he took one touch to control the ball, swivelled, and crashed the ball past McGhee.

A late free kick gave hope that all three points could be claimed, but McPherson’s free kick ricocheted off a defender and out of play.

This game turned out as feared. The result at Auchinleck had to be backed up, and it was a disappointing display. Cumbernauld obviously deserve great credit for this. They were dogged and fought for everything, and could do quite well in this league if they can keep this level up week in week out. Apart from a spell at the start of the second half, the Bankies never really got a hold of the game. Passing was erratic, and the movement up front seemed pedestrian and obvious. The intensity just wasn’t there. The other top sides in the league have all come out with strong starts, and the Bankies already have a bit of catching up to do. Thankfully, a point was rescued so it could have been a lot worse. The next game is away to Kirkintilloch Rob Roy.