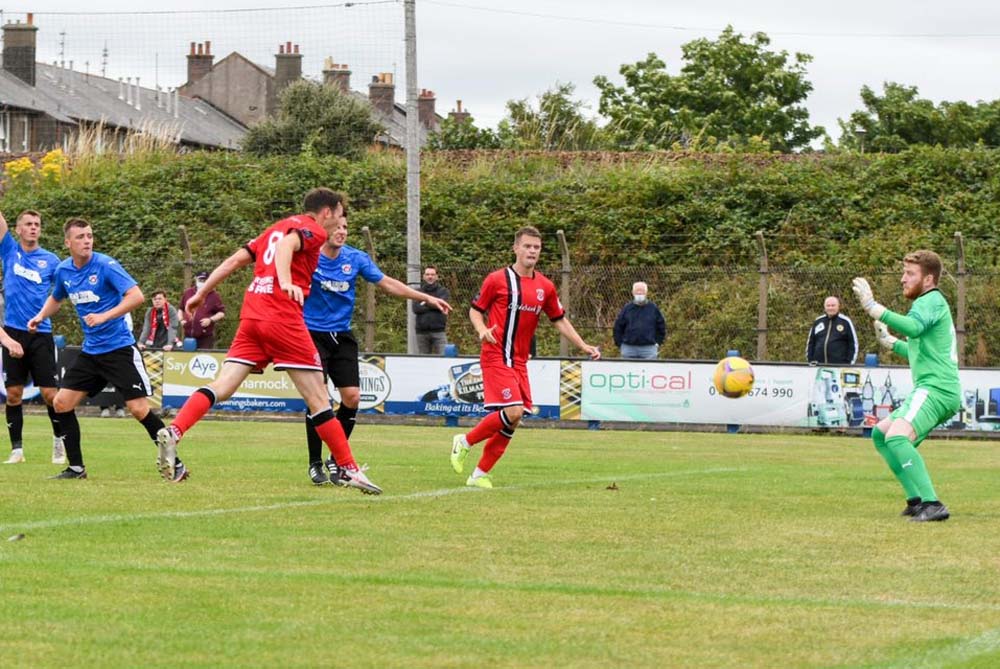 Joe Slattery’s headed goal seven minutes before half time was enough to see the three points return to Clydebank in a hard fought match at Portland Park. The Bankies had the better of the first half and deserved to be ahead but spent most of the second half defending their lead.

Gordon Moffat only made a couple of changes to the starting eleven from Wednesday with Hamish McKinlay coming in for his first start and Conor Lynass restored. Craig Holmes and Liam McGonigle were the players who dropped to the bench.

The first half was mainly about Clydebank, and how they could break down a stubborn Troon side. The Portland Park tactics were obviously to get in about the Bankies and time and again they gave away needless niggly fouls.

This meant it was difficult for the Bankies to find any real rhythm, and it took until 12 minutes in before a proper goalscoring effort came along. Needless to say it was a foul on Nicky Little that gave Slattery a chance from a free kick around 25 yards out. He struck the free kick well, but Fisher nearly made a mess out of it as he let the ball slip out of his hands. Luckily for him the ball went over the bar and rested on the roof of the net.

The few chances that were made were in front of the Troon goal. Nicky Little had a hooked effort that came from a Green header, but the shot had no power. Then Hamish McKinlay, eager to impress, cut in from the left wing and rather than look for a man in the box, he tried to catch the goalkeeper out at his near post, but the ball went just on the wrong side of the upright.

It took 34 minutes for Troon to have a shot on goal and it was probably their best effort of the whole 90 minutes. A quick break on the left saw the ball pulled back for Josh Black, but the incoming forward rushed his shot and scooped the ball over the bar from just inside the box.

Clydebank finally made the breakthrough in the 38th minute. A Lee Gallacher corner kick was headed clear to the left wing. Kevin Green raced after it and hit the ball back first time into the box on the turn, where Joe Slattery was unmarked and gratefully nodded home from six yards out.

Troon were playing a dangerous game at the back trying to pass the ball out from the goalkeeper, and twice before the break they were almost caught out as the Bankies regained possession. Fortunately, for Troon, the Bankies were unable to make it count. This tactic was dropped at half time.

Like Wednesday again Cumnock, the second half was a different story as Troon were on the front foot most of the time. There was a wind that carried the ball a bit, but it would be making excuses to say that is what caused the reversal in fortunes.

Despite all their possession, Troon never really looked like scoring. Yes, they had a few corners, but these were by and large handled well by the Bankies defence, apart from one scramble that Donnelly had to be alert to block. The only other shot at goal was a volley from Fulton that flashed wide of the post, but he was flagged offside anyway.

Although, not showing up much in the second half, the Bankies did have chances to kill off the game. As early as the 48th minute, Hamish McKinlay got on the end of a ball that dropped from the sky, but could only weakly steer it in the direction of Fisher in the home goal.

Slattery had a fantastic opportunity just two minutes later. McKinlay and Gallacher were involved in the build up, and the latter dragged the ball back for Slattery who with the whole goal to aim at from 8 yards, smashed it off a defender’s legs, and away to safety.

With 19 minutes remaining, McKinlay missed probably the best chance of the second half for the Bankies. Good build up play saw the ball end up with Oisin McHugh on the left wing. He set an inviting cross into the box, and McKinlay was well positioned to head the ball to goal, but maybe a wee lack of conviction saw the ball skid off his head and wide of the mark.

The Bankies last good chance came five minutes later. Again, good possession saw Nicky Little release Lee Gallacher in the box. The tricky Winger should have at least made the goalkeeper save his shot, but he failed to wrap his foot around the ball properly and it pinged well wide of the post.

The last fifteen minutes saw the game become a bit angry, and a couple of flashpoints were poorly dealt with by the ref. In the end up Clydebank had four players booked (three for kicking the ball away and one for wasting time), whereas the much more aggressive Troon only had three booked, all for fouls.

I would have taken this result at the start of the game. Troon are a hard working side, who will not be easy to beat at Portland Park. The Bankies took their chance when it came along, and on opportunities created deserved to win. Troon kept battling to the end, and may feel they could have nicked something from the game, but defenders don’t often get the credit that forwards do, but today their contribution of a clean sheet went a long way to delivering the three points.

Bankies are on their travels again on Wednesday to Glenafton who staged a great comeback at (ex) league leaders Kilwinning Rangers. This will be another very difficult game against a side that are usually on a par with the Bankies. The top sides are continuing to impress at this early stage of the season and the pressure to keep in touch is high already.