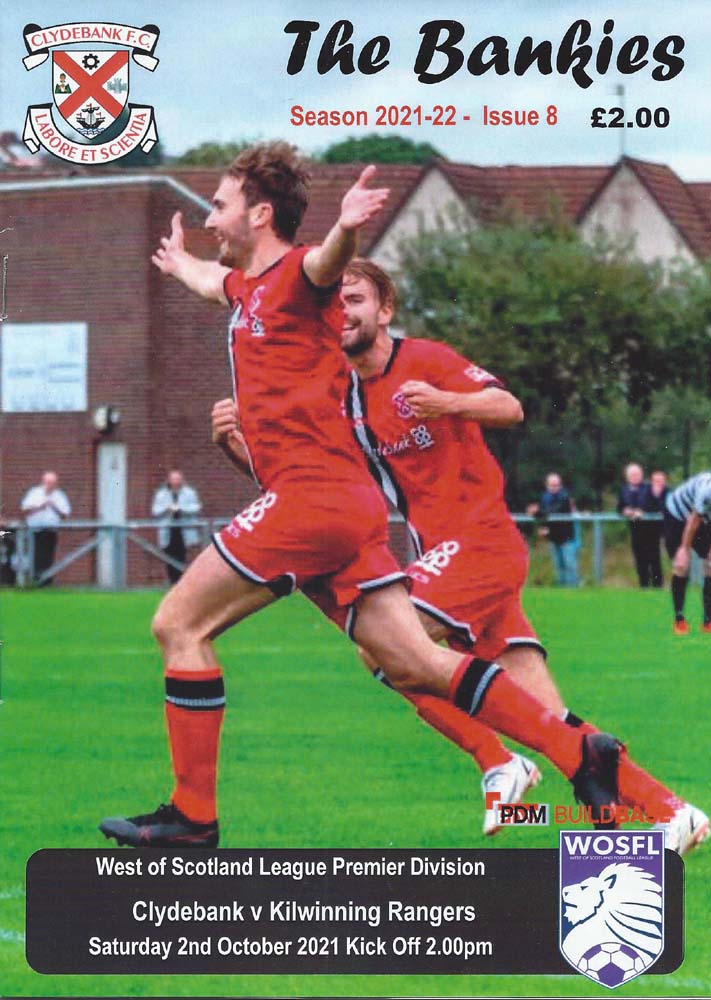 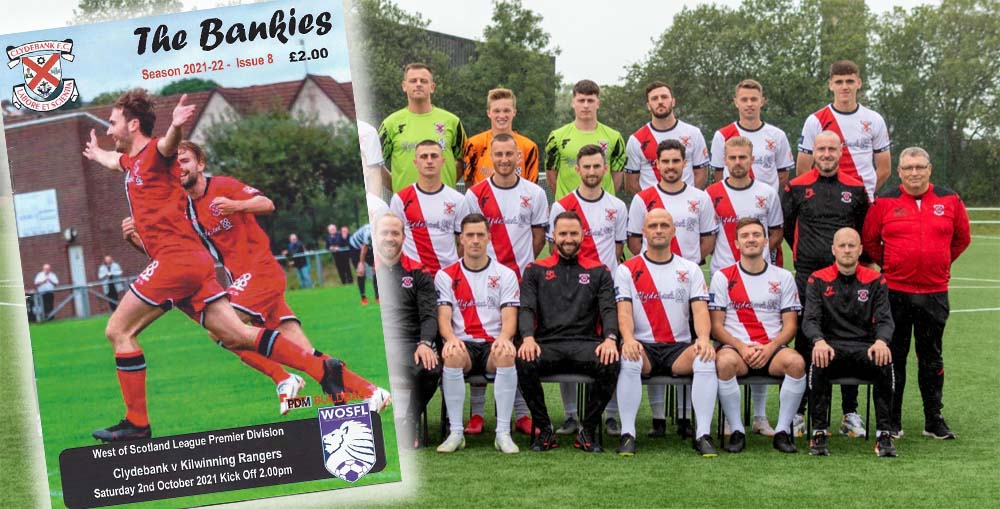 Clydebank suffered their second defeat in four days and even at this early stage of the season their championship aspirations seem to fading away. It is, in fact, a third straight league defeat at home and they have all came against our nearest rivals, Pollok, Hurlford United and today’s opponents Kilwinning Rangers. The game was lost to a solitary strike from Calvin Kemp midway through the second half and although there was not a lot between the sides, Clydebank could not put the ball in the net when they were in the ascendancy.

There were a few changes to the line up from Wednesday as Jamie Donnelly returned in goal and Ross McPherson and Cammy McClair replaced Liam McGonigle and Chris Black who both were on the bench.

Frazer Johnstone who has suffered some early yellow cards in recent times set out to beat his record this afternoon as he managed to get booked in just 32 seconds, and this is always a precarious situation to be in for a midfielder, especially someone as tenacious as the Bankies no 6.

The first half was a bit eachy peachy with neither team having the better of the other. In terms of goals chances there were four stick outs, two apiece for each side and they should all have been goals.

Bankies were first up in just three minutes when McClair was sent through on the goalkeeper by Nicky Little. He should really be scoring in this situation, but he took the ball on his weaker left foot and the keeper blocked and plucked the rebound from the air.

Two minutes later and Kilwinning had an incredible series of misses. Donnelly made a fine block from McColm, then saved again from the same man while lying on the ground. The third attempt looked like a goal but Matt Niven somehow manged to get back and head off the line.

The Buffs were having some joy down the left wing, doubling up against Hodge on a few occasions. A cross from the left wing found McColm unmarked in the box after 24 minutes. His header hit the inside of the post, and Donnelly was quick to react to block the shot on the rebound.

Clydebank returned this favour just before the interval. Kilwinning were trying to play a crazy build up system from, essentially, inside their own six yard box. Some coaches seem to watch Liverpool or Man City do this on TV and think that their players can replicate it several levels down. Troon tried this against the Bankies earlier in the season and had to abandon it at half time. Kilwinning did likewise.

The players at this level are just not good enough to play that level of possession football deep in their own half for an extended period of time. Inevitably, a player was dispossessed and Lee Gallacher hit a cracking low drive from the edge of the box. He was incredibly unlucky to see his shot hit the inside of the post, spin across goal and the go out for a goal kick on the other side.

It took the second period a while to get going, but Clydebank had their best spell of pressure from around five minutes of the restart onwards. It began with a free kick on the left which fell to Nicky Little. He shot reflexively from around the penalty spot, and it took a deflection on its way through to keeper Barclay who made a fine save low on his right hand side.

Kilwinning did have a great chance straight afterwards when the Bankies were caught square on the halfway line. McColm again missed yet another opening as he seemed to overhit the ball and had to hurry his shot and it went well wide of the goal.

The Bankies were immediately on the attack again and a neat chipped cross on the right wing by McClair was met by the head of McPherson, and it forced Barclay into a great fingertip save over the bar. It looked like Clydebank were gearing up to get the opener as they had several corner kicks but nothing came from them, and Kilwining had weathered the storm.

The Buffs having come through this period were now much more composed and the Bankies never really threatened their goal again in any meaningful fashion. It was to get worse as the Bankies were hit with the sucker punch after 68 minutes. Green gave away a foul out on the right wing needlessly allowing Kilwinning to throw the ball into the box.

The cross was hit diagonally into the penalty area and was headed back across the goal to the back post where substitute Kemp beat Donnelly to the ball and knocked it past him into the net.

For the umpteenth time this season, Clydebank were behind and chasing the game at home after going behind. We got away with it by scoring late goals against Cumbernauld, Irvine Meadow and Darvel. That good fortune has now evened itself out as no comeback was forthcoming against Pollok, Hurlford or Kilwinning. The only mentionable feature of the last period of the match were the six yellow cards as Clydebank desperately tried to get the equaliser and Kilwinning desperately tried to waste time.

It may be premature to say that any league challenge is over, but the leaders are now five points ahead with two games in hand with a history of losing very little. As stated in the last match report, Clydebank’s form against the other 7 teams in the top 8 is poor. No wins, and only three points from a possible eighteen from the six teams played. Five of the games have been at home as well meaning we have to visit these teams in the second half of the season. It is hard to win a league if you can’t beat your main challengers and that unfortunately appears to be the case at the moment.

The Bankies travel to Beith next Saturday with an earlier than usual 12.30 kick off. The Ayrshire side are the last of the top eight clubs that Clydebank have still to meet and we could do with a confidence building win to try and turn around recent fortunes.