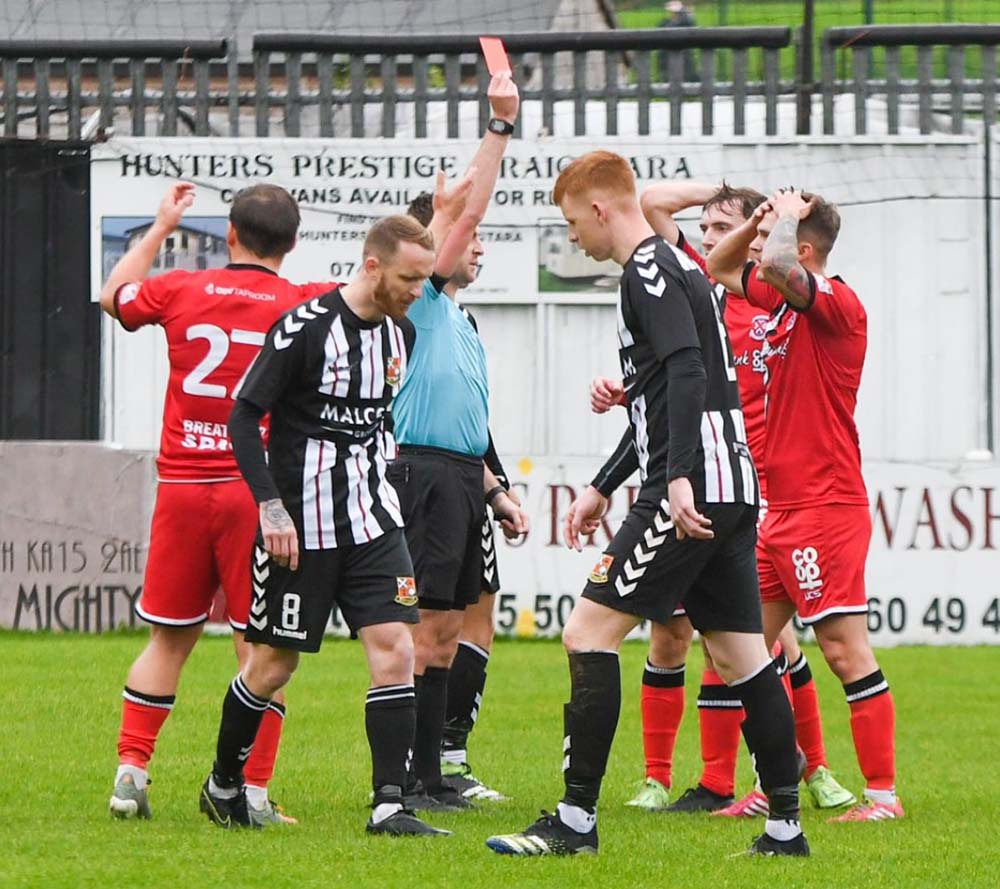 Clydebank had to show all their battling qualities at Beith to take a point in a goalless draw after they were reduced to ten men after just eleven minutes at Bellsdale Park. Frazer Johnstone was deemed to have gone in over the ball, and was given a straight red card by referee Euan Birch handicapping his team mates for almost eighty minutes. Fortunately, Beith were a poor outfit on the day and Clydebank looked just as likely to grab the winner as their Ayrshire counterparts.

Clydebank’s injury situation has deteriorated somewhat after it had looked like it was starting to clear up. Lee Gallacher, the last ever present in the side, was unfit to play as was Kevin Green whose hand was strapped up. They joined the other crocks Craig Holmes, and Ciaran Mulcahy on the sidelines. Whether it was enforced or not, Gordon Moffat started with three central defenders in the shape of Niven, Darroch and McLean, quite possibly, for the first time this season.

Although the weather was dry for the most part, the game was played in awkward conditions as the ball was skidding about quite a bit due to the rain that has fallen over the last few days. This led to a match of few chances, hard challenges and overall reasonably enjoyable for a goalless match.

Arguably, the outcome hinged on Frazer Johnstone’s red card after 11 minutes. From my viewpoint on the other side of the pitch it looked a yellow card offence, but speaking to others closer to the incident opinion was split. It doesn’t matter, as the only opinion with any weight is that of the referee and he decided it was a sending off.

The Frazer Johnstone situation is a difficult one. He is a steady performer in the engine room for the Bankies, but his record has been hard to defend recently. This was his second red card to go along with the six yellows he has received. The cautions have been problematic as five of them have come in the opening 25 minutes of matches meaning he has been walking a metaphorical tightrope.

As far as chances go in the game, there were next to no clear cut chances in the game. Shooting down the hill in the first half, Beith’s forward passing was atrocious with the ball being played out of bounds more often than not. A shot from Noble which sailed over the bar from 25 yards was as good as it got.

Clydebank on the other hand had a number of corner kicks, but missed Lee Gallacher’s deliveries. The best opportunities for the Bankies were two free kicks from McPherson one of which brought out a reasonable save from Burgess. Nicky Little came closest perhaps with a half volley that took a deflection and just missed the frame of the goal.

Beith were better in the second half, and almost immediately McLean had a chance after a long clearance from Burgess went over Darroch’s head. The defender recovered to block the shot.

For the most part, it was difficult to tell who had the ten men as Clydebank carved out probably the best chance in the game after 52 minutes. Little slid the ball behind the Beith defence, which Byrne latched onto in the left hand channel. He hit the bye line and pulled the ball back nicely for McPherson. The Bankies striker tried to place the ball into the corner with his side foot, but a defender was well placed to deflect to safety.

Any other shots at goal from either side came from outside the box, as Beith persisted with a long ball game that the Clydebank defenders lapped up. The Bankies for their part tried to win the game with Moffat making positive substitutions but really the fresh legs were there to keep the team going who put in a great shift. Special mentions go to McLean, Darroch and Black who haven’t had much game time recently. All three ran themselves into the ground and were the star performers on the day.

The loss of another two points means that Pollok and Auchinleck, who both won, pull further away from the Bankies. It has been a sticky spell with four wins, three draws, and three defeats being the recent form. Goals have been in short supply, as the early season form has retreated somewhat. A few of the clubs chasing behind are now getting a bit close for comfort, and the Bankies are in need of a good strong result to get them back on track.

Benburb visit Holm Park on Wednesday for another tough encounter. The Bens had a decent start to the season but have suffered a few defeats recently, and have dropped perilously close to the bottom seven. Clydebank really need to be winning this kind of game at home so as not fall further behind in the league.