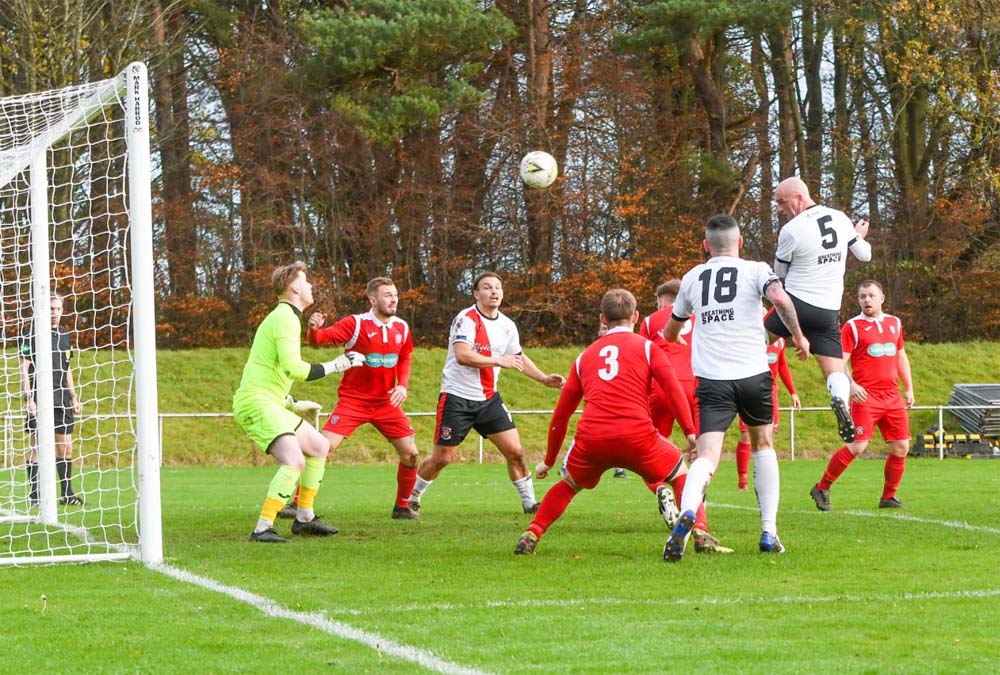 Clydebank cruised through to the 4th round of the South Challenge Cup with a straight-forward disposal of Glenrothes at the Warout Stadium. The Glens are handily placed at the top of Conference B in the East of Scotland League but the gulf in class became more evident as the match progressed and the result, although maybe a little harsh, was reflective of the chances created.

With the cup game coming up next week Gordon Moffat was able to rest a few players and change things about enough without weakening the side to any great degree. Gallacher, Donnelly and Niven were left out with Lynass, Stevenson and Green taking their places. Hodge returned from suspension and Johnstone and McPherson were given the opportunity to stake a claim for a starting berth against Clyde.

Most of Glenrothes good work came in the opening fifteen minutes, until the Bankies sussed out the pitch and their opponents. The home side had some effective forwards, but were not so clever on the defensive front. Brown and King both had early shots from just outside the box that were on target but too near Stevenson to cause any trouble.

Clydebank were to fall behind from the penalty spot after 10 minutes, when King was impeded by Johnstone as he tried to get on the end of a through ball. Schiavone took the kick and confidently sent Stevenson the wrong way.

This sprung the Bankies into retaliatory action almost immediately when Johnstone played a fantastic diagonal ball into the box for Lynass. The winger delayed his shot ever so slightly, but just enough for a challenge to be made and the ball was deflected out for a corner.

The Bankies drew level after 16 minutes with probably the pick of the goals as Hodge burst through the Glens defence, and played a fine one-two with McPherson. He took the ball on the run and thumped it low into the corner for his first goal for the Bankies (or second if you count the own goal he scored when he was at Hurlford last season).

The Bankies had now clearly adapted to the pitch and were dominating the midfield forcing the home side into more mistakes. It was no real surprise when the Bankies took the lead after 25 minutes, and it came from a corner kick. The in-swinging cross was met by Jamie Darroch who was given a free header on the edge of the six yard box and he bulleted it high into the net.

The crucial third goal came after 37 minutes. Lynass and McPherson were instrumental in a cutting move similar to the first goal except this time Crowe did well to block. Unfortunately for him, he pushed the ball into the path of McGonigle who ran it into the goal from a few feet out.

The game was completely killed just two minutes after the restart. Again, it was unfortunate for the hosts who had just seen Stevenson produce a superb fingertip save just moments earlier. Quick as a flash the Bankies raced down the other end of the field. McPherson, who had his best game in a while, set up McGonigle with a fine reverse pass. The subsequent shot was parried wide by Crowe only for Lynass to retrieve the loose ball, and dink it to the back post for Nicky Little to tap into the net.

The heart went out of Glenrothes, and the urgency levels of the Bankies dropped and there was slack play from both sides. Also, an injury to keeper Crowe led to a lengthy delay and this disrupted any fluency in the pattern of play.

However, the Bankies periodically carved out opportunities which could have increased the lead. They had to wait until the last five minutes though to add to the goals tally when two further strikes from McGonigle gave the result some added sheen. It also gave Liam McGonigle a hat trick and he now joins a select band of players to hit a treble for the club. His second was a simple tap-in from a Lynass pass which he side footed home with the defence posted missing. The final goal of the match was a fine strike as he controlled a through ball with a single touch, and drilled the ball low past substitute keeper Shaw.

You never know what you are going to get in a match like this. An opponent going well in their league with a very healthy crowd in the stadium could have been difficult for the Bankies. However, once the players got a feel for their surroundings they confidently went about their business without ever reaching the heights. It was a good result and some of the players did their prospects for the Clyde game no harm particularly Hodge, Johnstone and McPherson.

Everyone can now look forward to the Scottish Cup match next week with hopefully an almost full squad to pick from. It will be a great occasion, and to lock horns with an old foe who regularly visited Kilbowie Park, and had so many memorable encounters will be particularly special.